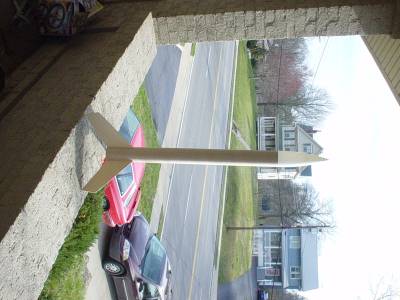 BT-80, E-powered 3.5x upscale of the Estes Wizard, one of my favorite rockets of the 70's.  As you might imagine, this was a fairly simple build, but that didn't stop me from finding a way to make a "gotcha" of my very own.   I started the build back in 2002 after attending NARAM 43 with my brother-in-law.  Tony had brought an Estes Phoenix to NARAM, and while we were sitting by the car between flights, a mystery man walked up with a package of mystery motors and asked if Tony would like to try them in the Phoenix.  The packaging was obviously Estes, but all identifiers were whited out, including the card that identified the impulse.  I don't remember if Tony ever flew the Phoenix that weekend, but I do remember thinking how cool an upscale of a minimum diameter Estes kit would fly on one of them.  The Wizard, the bird that dropped my jaw on a C6-7 back in 1979, sounded like the perfect rocket to start with.  Issues with upscaling the decal kept my interest level low for quite a long time, but that all changed recently when I found that Excelsior Rocketry offers the BT-80 decal, and it really changed when the decal arrived and I saw how great it looked.  The only problem is that now I know that someone else likely has one of these sitting around somewhere.

As you might imagine, this was a fairly simple build, but that didn't stop me from finding a way to make a "gotcha" of my very own.  At the time of the initial build, I had become briefly enamored with epoxy putty as a possible fillet material.  The first kit I tried to use it on was a Centuri ThunderRoc clone that came out looking like it had steroid-induced tumors, so I decided to cut back on the material used for this one.  It still came out looking, uh, tumorous.  I still think epoxy putty is a great idea for use in fillets, but I no longer think it's safe in my hands.  Other than that, this bird went together with ease.  No instructions to speak of, but since I've built every Wizard I've ever built incorrectly, (fins lined up with the rear of the body tube,) they're not really needed anyway. 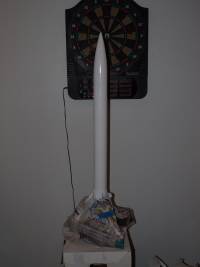 The rocket was flightworthy soon after I started the project, but because of the tumorous fillets and difficulties reproducing the BT-20 decal at BT-80 size, it would be four years before I finally dragged it out for the first flight.  It had been sprayed with Valspar gloss white all that time, but with the launch scheduled for the next day and with barely enough purple spray paint to get enough cover to suggest the purple aft section of the rocket, I did a quick spray until the rattle can blew air.  From twenty five feet it looked okay.  If you squinted.  Let's not talk about close up.

I got reinterested in the project before NARAM 53.  The fillets had grown on me to the point that they no longer completely embarrassed me and while sniffing around the Excelsior Rocketry decal site and contemplating asking Gordon to make a vintage Wizard decal, I found that he already had one listed.  It was truly a thing of beauty, and I immediately got to work building another 1:1 clone so that I could get a side by side picture.  The rocket was resprayed with a fresh coat of Valspar gloss white, then masked off and sprayed with Testors Purple-Licious lacquer, and, yes, I'm man enough to admit that.  Gordon't decal comes with the large body wrap, two Wizard name decals and an Estes decal.  As it turned out, I'd need both Wizard decals after screwing up the placement on my first try.  (I forgot that the Estes decal went before the Wizard decal, and this was going to look like my original, no exceptions. 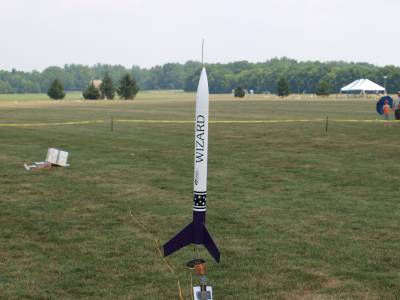 First flight in September, 2006 was on an Estes E9-6.  The liftoff was nice and slow, perfect for pictures.  It left the pad and nosed slightly into the light breeze, tipping over just before the ejection charge fired.  Recovery was on an 18" nylon parachute which brought it back toward the pad.  Very cool.  Exactly what I'd been hoping for.  It took almost five years for the second flight to happen, and it took a NARAM to bring it around.  This flight was on an E9-4 into a hot, sunny sky.  The breeze was light and constant, and the lift-off was exactly the same as the first flight with the rocket windcocking lightly as it ascended.  Ejection occurred slightly early with the 4 second delay, which caused some damage at the top of the tube, but it was moving slowly enough that the damage was slight.  Apparently this is more of an E9-5 bird. 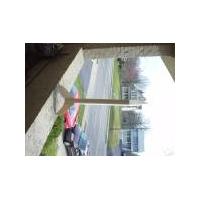 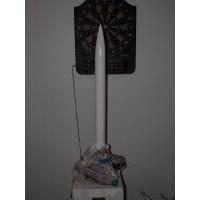 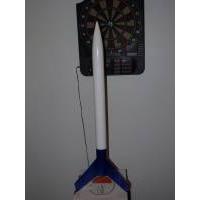 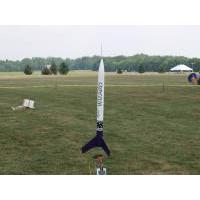