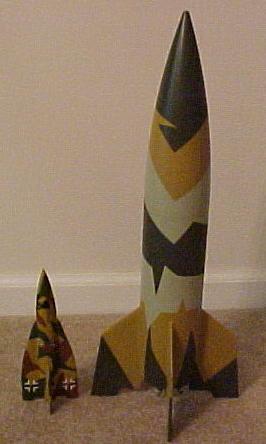 The A9/A10 was designed to be a 200 ton liquid fueled rocket with a range of over 5000 kilometers. The huge A10 lower stage was designed to loft the manned A9 winged rocket into space from which it could skip off of the upper atmosphere to carry a one ton warhead to attack New York-hence the program's codename: Projekt Amerika. The rocket never made it beyond the design phase when development was halted, although the Germans did some experimentation with the winged A4b.

As far as I have been able to tell, this is the first model of the A9/A10 combination, and perhaps with good reason! This was by far my most demanding project to date. I was trying to build a clustered booster that carried its sustainer inside its own nosecone using only Estes engines and no electronics.

Brief Description:
The most challenging design consideration was the recovery of the big A10 booster after it had launched the A9. This required a booster motor clustered with delayed motors selected so that they could deploy the A10 recovery system after the A9 had launched. Equally challenging was the design of the A10 nose cone. It had to securely cradle the A9 during boost and be able to separate upon A9 launch.

I had considered the 4 inch Estes V2 but that has enough of its own weight, strength, and performance issues without adding more complexity given that I wanted to use Estes BP motors. The 2.6 inch V2 was a good size and weight, but I was afraid I wouldn't have enough room in the tailcone for clustering. The 3 inch Big Daddy seemed a good compromise and Michael's article on his mod was very helpful. I was aiming for a 12 ounce launch weight with one D12-0 and two 13 mm A10-3T motors. The A9 would have an A10-3T as well.

A10 Construction
First step was to cut the tail cone. I cut about 5 inches from the tip, giving me a diameter of about 2.5 inches in the base of the tailcone to work with-enough room for a 24-mm and two 13-mm engines. I would have preferred to use 18-mm engines instead of the mini engines, but couldn't think of a way to make this work without upscaling to the 4 inch V2. I then used a Dremel tool with 3 cutting disks to cut fin slots. I selected 1/8 inch balsa for the fins and three cutting disks was just about the right thickness to require only minimal sanding and fitting.

I used Rocksim to design the fin shape. Since I knew stability would be an issue, I chose to make the fins broader than on the A10 drawings but still tried to keep the overall styling consistent with the German rocket designs. Fins are through the wall to the motor mount. Paper to wood joints are joined with wood glue with epoxy for plastic to paper/wood joints.

I used 1/16 inch plywood for the bottom centering ring and modified the paper centering ring supplied with the Big Daddy to accommodate the additional 13-mm engines at the top of the tail cone. I also added a 1/8 inch plywood baffle above this. A hook eye in the baffle with Kevlar® string is used to connect the 1/4 inch sewing elastic and 18 inch nylon parachute.

I used a portion of the Big Daddy nose cone shoulder and another paper centering ring as a piston that separates the A10 recovery system from the A9 assembly. Basically, the idea was for the booster engine's gases to pass through the piston to ignite the A9 while the ejection charges from the two 13-mm engines would blow the piston and deploy the A10's parachute. Powdered graphite was applied liberally to make sure the piston could slide freely. Two 1/4 inch holes in the top of the tube passing through the piston allow for ventilation of the booster motor gases.

I used a 5 inch piece of body tube-larger than I'd select if I were making a scale model but necessary to give me enough room for the recovery system. The rocket still seems to have the short, stocky look of the real thing with the broader fins contributing to this look.

A10 Nose Cone Construction
With the basic booster construction complete, I turned my attention to the nose cone assembly. I decided on a split Big Daddy nose cone and used paper centering rings from this kit and the spares box to create bulk heads. The first step was to cut the shoulder down to about 1 inch. I then split the cone in half with a razor saw (which turned out to be a lot easier than I had expected). The bulkheads were reinforced with epoxy and are placed to hold the A9 securely and provide space for about 3/4 ounces BBs and epoxy as nose weight.

It took some time to figure out how to design the nose cone so that it would stay together during boost but come apart easily enough during the A9 launch. I contemplated various complicated spring arrangements, but decided that the combination of the A9 acceleration and the overpressure of its engine exhaust would be enough to lift out the nose cone and force it apart. I used .020 styrene U beam, sanding off one side of the U to make an L shape on one side of the top third of the cone with .020 styrene on the other side to form a hook.

I painted the inside of the nose cone with heat-resistant barbecue paint to protect it from the engine gases.

I also used strips of .010 styrene along one edge of the bottom two-thirds of the cone to improve the fit and give some lateral stability.

The nose cone halves use tumble recovery for now, but I may add streamers if necessary.

A10 Finishing
This seemed like a good candidate for a bare metallic finish but didn't want to experiment with Testor's Model Master Metallics on this subject. I selected a splinter camouflage typical of German rockets. The light base coat is Rustoleum Gloss Protective Enamel light olive. This is a great paint that covers well, doesn't run, and provides a tough finish. The olive drab is Krylon camo color and the tan is Model Master light Afrika mustard. This was my first splinter camouflage attempt and it was not too difficult but took careful planning. The key to these schemes is after masking, always overspray the color you just covered to seal any leaks in the masking tape. All in all it turned out pretty well.

A9 Construction
Construction of the A9 was fairly straightforward. Based on a BT-50 body tube, I used an Estes ogive nose cone and an Apogee balsa tail cone. Wings were of 1/8 inch balsa tapered at the edges to give it a "substantial" appearance and to withstand the forces during launch. Rudder fins were 1/16 inch balsa. All fins were soaked in thin CA for strength. The canopy is from a 1/48 scale model aircraft drop tank half. Kevlar® string was used for shock cord and a 12 inch plastic parachute for recovery. A 3/16 inch launch lug was added, almost as an after thought. Rocksim was used for design.

I hand brushed a splinter scheme over a Model Master light Afrika mustard base coat with a duck egg blue bottom color. Decals are from a 1/48 scale Me-262 plastic model.

Flight
This is a project that has numerous possible failure modes. Would all engines in the cluster fire? Would my first attempt at gap staging work? Would the nose cone separate to allow the A9 to fly (up)? Would the A10 recover properly? I had been working on this project for over four months so when the paint was dry and the winds were fair, there was really no reason not to go for it. I used a D12-0 and 2 A10-3Ts in the booster with an A10-3T in the A9. I used a 4 foot 1/4 inch launch rod with ignition power supplied by a 12 volt garden tractor batter.

The A9/A10 combination got off the pad nicely, arcing slightly. Rocksim said that the D12-0 would burn out at about 160 feet. Taking into account the arcing flight path, this seemed about right. The nose cone separated and the A9 flew on 100 percent as designed. My boys and I were stoked. One thing I had neglected to consider that with this design is there's a lot to watch, so I probably needed more spotters. I focused on the A9 and nose cone halves, but the A10 apparently continued ballistic. The A9 recovered nominally. I never did see the A10's red chute.

The good news is that we recovered all the pieces. The A9 had a small zipper, probably due to high speed ejection. The A10 impacted "nose" first. From the looks of it, the ejection charges fired an instant before impact because the plastic baffle was driven into the body tube. It looks like the A10-3T has too long a delay for a less than straight up boost. I'll need to regroup to see if I can do anything to improve the A10 recovery. 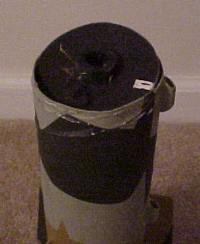 Reconstruction
Reconstruction was straight forward. I sawed off the damaged body tube to about 1/2 inch above the baffle and used an undamaged portion to make a tube coupler over which I glued a 3 inch section of Big Daddy body tube. The piston was repaired and strengthened with epoxy. I considered switching to 1/2A3-2Ts to shorten the delay, but I was concerned that the ejection charge here would be even less than with the A10-3Ts. Some ground testing was in order. In two tests with the booster strapped down, two A10-3T engines ejected the piston only once, and then weakly. I needed a plan B. 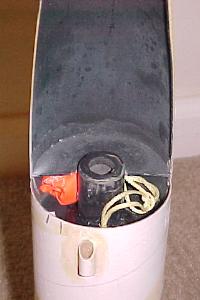 Nosecone separation should expose the drogue to the wind and deploy it. The drag should then pull out the piston and deploy the main parachute. My main concern is heat damage to the drogue or lines from the vent holes. After the first flight, I could see no evidence of scorching near the holes so I reasoned that the risk would be minimal. The piston slides out easily on the drogue so I'm optimistic about the next flight.

Summary
This was a great project in that I really went through the complete design process from start to finish. The feeling of watching that nose cone separate and the A9 fly off is why we rocketeers do what we do. 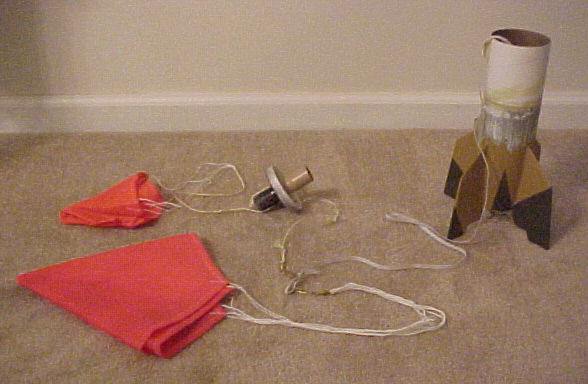