Brief:
As I've progressed through the hobby, I've been achieving higher altitudes and faster speeds. I finally decided I wanted to attempt a Mach busting rocket, however, I wanted to make it tougher to do and chose to build one that utilized no composites. This paper tube 3FNC bird was designed to be 3" diameter x 60" long, weighed in at 61oz, and have a 54mm motor mount. Target motors are the K445 and K550 to push it through mach speed. It is single staged with dual deployment recovery controlled by a Missile Works RRC2 altimeter.

Tubular Kevlar® is used throughout for the recovery harnesses as well as a 45" nylon BSD parachute for the main. 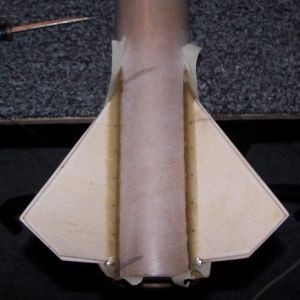 This was my first attempt at building a fin can outside of the body tube, which turned out to pretty simple. Fins were tacked on and then filleted to the motor tube as well as the middle centering ring when installed.

The only thing I did here different was the drilling of 1/16" holes near the fin root to allow the epoxy to soak into, in an attempt to form epoxy nails into the fins.

The most difficult thing I ran into was figuring how to attach the recovery harness in this near minimum diameter bird. I ran a length of 1/4" tubular Kevlar® through the top two centering rings and then epoxied the assembly in place in the booster tube. As this was slid into place, coupler tubes were also placed between the top two centering rings to double wall the booster tube down to the top of the fins. 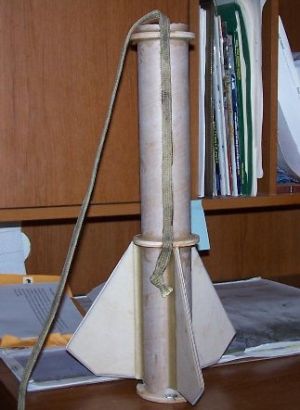 The remainder of the booster section was completed by double walling the upper section and applying internal and external fillets from the fins to the body tube.

Retention was handled by T-nuts in the aft centering ring.

The electronics bay was built copying the design of the Binder Design kits that I had used with my Binder Jaguar. It consisted of two 6" couplers butted together and then a 5" piece of body tube centered over them. All thread rod was used to hold the assembly together and U-bolts for the harness connection points. A Binder Design key switch was installed for arming the electronics.

The main/payload bay consisted of a 17" piece of body tube, the initial design called for double walling here but I ended up not doing so. I assumed this tube had the least amount of weight on it and therefore would not need it, I was also concerned with how to repair this section should it ever zipper, the double wall idea does not allow you to just cut off a short section should that happen.

The nosecone was a BSD 3" cone was secured to the upper tube via friction fit and shear pins.

Flight:
First flight took place on March 19, 2005. The rocket was set up for dual deploy recovery controlled by the Missile Works RRC2 as well as a beeper placed in the payload bay to aid in finding the rocket. At ignition, the I284 shot the Mach1 off the pad quickly with a large White Lightening flame almost as long as the rocket. The flight went well to 4,281' and dual deployed for a close recovery.

After this I returned home and calibrated the drag coefficient in Rocksim to match that actual altitude of the rocket and then re-ran all of my simulations with the correct CD. I was showing the ability to break mach speed with either the CTI K445 or the AT K550. That attempt would have to wait as I had a L3 flight coming up and I didn't want to risk losing one of my two altimeters before that flight.

With my L3 flight complete in June, it was time to attempt my second goal of the year: breaking Mach with a non-composite rocket. The weather was good so I made my attempt at a TQC launch in Walcott, IA on August 6, 2005. I was unable to get either a K445 or K550 for the flight and ended up selecting an AT K695 Redline for the flight. This motor had even more of a kick so it should be able to easily push it through to break Mach. 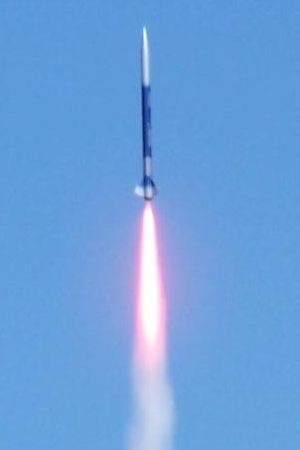 The rocket was prepped for the flight, motor built and installed into the rocket, and it was time to go. Based on simulations, I was looking at an altitude of 8,200 and maximum velocity of over 880mph on the flight. At ignition, the Redline kicked the rocket off the pad quickly and it started up nice and straight. At 2 seconds into the burn, the rocket folded over the electronics bay and then spectacularly shredded.

All pieces were recovered and brought back for inspection. From the pieces leftover, it appeared the rocket folded over at the electronics bay or just above it, flight video looks to support this, post flight simulations show it was over 880mph at the time of the shred.

Summary:
I believe the rocket can make the flight and I have it rebuilt with some modifications.

The design of the Binder avionics bays is OK, but I don't think it's a good design for these type of high pressure flights. I'm still split between thinking the rocket folded over where the two couplers butt up to each other or folded over in the single walled part of the main bay.

The rebuild incorporates a one piece avionics bay, which is a LOC 3" bay that uses a Stiffy tube to help further strengthen the assembly. The new main bay is fully double walled this time. And just to be on the safe side, the booster section is shear pinned to the avionics bay. It did not appear to drag separate on this flight but this is just to be sure.