Advanced Rocketry Corp appears to have recently had a "re-opening". I had heard of them some time ago when someone submitted a review on their ARC 1318 PSR which is a side-booster cluster rocket. This time they have brought another rocket into their collection, Shark. Anything special about this rocket? Yes, its looks. That is the only reason I bought it.

ARC indicates there may be other "sea creature" theme rockets coming. May I suggest a Mississippi Catfish (with whiskers), a Hammerhead Shark, or a Sword Fish.

The kit includes a single body tube and a balsa nose cone to make up its 16" in length. There are seven laser-cut balsa (contest grade?) fins. It also has an 18mm motor mount with thrust ring and retainer hook. A 12" ASP mylar parachute with a 1/8" elastic shockcord for the recovery system. Lastly there are two decals for gills and the mouth.

The instructions are printed on the front and back of a single sheet of 8½ x 11" paper. There are appropriate color photos and a tube marking (2D) template. The ASP Mylar parachute assembly instructions are included with the parachute. The rocket build is easy and should be considered a skill level 2 kit. The rocket finish is more difficult and should be considered advanced.

The motor mount is assembled first and is fairly routine in its assembly. ARC uses a paper centering ring to hold the center of the retainer hook down. I needed to take out one inner layer of this ring before it would fit over the motor tube and hook. I simply took a hobby knife and picked at the spiral edge and then peeled one layer out. I would recommend this step.

The laser-cut fins are nice. They also seem denser than balsa typically provided with kits (may be contest grade).

I spent the time to round each fin so that it looked more life-like and to mimic the provided pictures of ARC's Great White Shark.

I used wood glue to attach the fins to the body tube and then used 5-minute epoxy to make fillets (no pun intended).

ARC instructs you to attach the launch lug between two fins 6" up from the bottom of the rocket. I cut mine to be the same length as a small, forward fin and then glued it into the joint. This would be the bottom of the shark and therefore would be better hidden.

The shockcord is 26" of 1/8" white elastic. It is mounted with a paper mount. There is a template that you are supposed to trace onto some cardstock (index card). The template is simply a rectangle that two slits are cut into. The elastic is weaved through these slits and then it is glued into the rocket body tube. This may or may not be equivalent to a 3-fold method.

There is a large washer for nose weight that is glued to the balsa nose cone and then an eye-screw is glued/screwed into the nose cone. The elastic is attached to the eye-screw.

Once the ASP Mylar Sport 'Chute (12") is assembled it is attached 4" down from the nose cone.

Before beginning the finishing process, I sanded the tip off of the balsa nose cone to make it less pointed. This was to try to make it look closer to the provided picture.

I used thick coats of Plasti-Kote Primer and sanded in-between. The nose cone took a lot of work. Once I was finished with all my sanding, I noticed how the color of the Plasti-Kote looked so much like the shark's grey. So I sprayed it again.

To make the lines on the sides to separate the grey from white, I took masking tape and tore it lengthwise and used the rough side as the "line". I then continued with my primer idea and used Krylon white primer for the underside of the shark.

After dry, I put on the decals. The mouth is printed on solid white decal paper. It is large and didn't conform perfectly to the nose come. So there were a few small creases that barely show. Not bad though.

The gills were printed on transparent decal paper.

The eyes and nostrils were put on using a Sharpie Red and White permanent marker.

Once all that was done, I sprayed the entire rocket with several coats of Walmart Clear Paint. How'd I do?

Overall, for CONSTRUCTION I would rate this kit 5 points. The instructions are descriptive and easy to follow. Laser-cut fins and the decals really add to the quality of the kit. Again, the most difficult part of the rocket is the finishing portion. 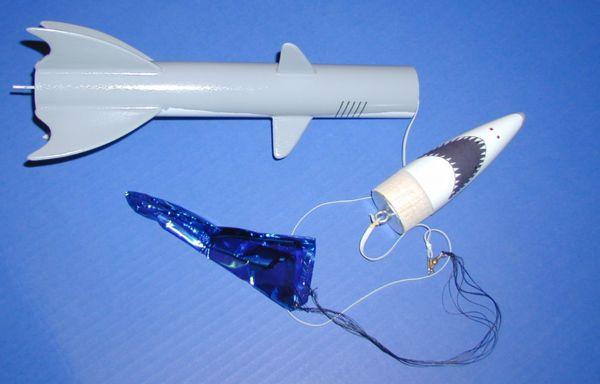 ARC recommends the B6-4 and C6-7 for flying the Shark. They indicate that the rocket should weight 2.1 ounces. My rocket weighed 2.5 ounces.

I decided to fly it for the first time on an A8-3. I used 5 sheets of wadding to try to protect the parachute and shockcord. 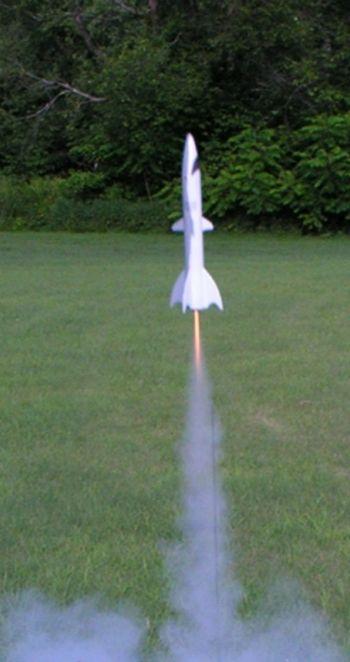 I chose the A8-3 since I was launching in the front yard. It worked out real nice and I would add this to the recommended motors list. The flight itself was very stable and ejection was at apogee (nose cone down). Ejection was good and the rocket descends at a nice rate.

Upon inspection there is a scuff on one of the upper fins. Could this be from the shortness of the shock cord? Not sure and there is no other damage.

The second flight was a repeat of the first for stability and ejection. Upon ejection the rocket's upper fins got caught in the shock cord and stayed there until it was on the ground. Perhaps that is what caused the scuff the first time? No other damage was observed.

Now what to do? I could fly it on larger motors and most likely get the same results. I was thinking about setting this one aside and use it for a "demo" at my son's school someday. We'll see.

For FLIGHT/RECOVERY, I would rate this rocket 4 ½ points. The rocket flies straight and looks cool on the pad. Its mylar parachute is nice (it includes a swivel). The elastic shock cord length has me bothered a bit.

I give the rocket an OVERALL rating of 4 ½ points. It is a unique looking model rocket that performs well on A8's for back (front) yard flying. A nice mylar 'chute, laser-cut fins, and motor mount system. Takes a lot of work to get a sea worthy finish, but the decals help. I'd recommend this kit just to get started on the "theme". Could these be the new Gooneybird's, errr, fish?