Don't let this rocket's basic design and simple building fool you. The intricacies of loading and flying these babies can be complex and you should ask for help from an experienced "Egg Pilot" to load for your first flight!

I had planned on upgrading the cardstock shroud to Artist's Paper which is 2-ply and said to be twice as strong, however, I found it to be cost prohibitive.

After cutting out the shroud and gluing it together with all the lines matched up, I found it to be a little difficult pulling the small end of the shroud over the 24mm motor tube. I eventually had to cut about 1/4 inch off to be able to pull it over because it was snug. If paper can stretch, I definitely stretched it.

The fins cut out quite nicely. I didn't sand them but the instructions recommend it. Others recommend sealing them but I didn't do that either.

I used CA-Gel for the initial fin set and then about 3 or 4 layers of Elmer's Wood Glue for the fillets.

The wire launch lug bent nicely according to the diagram on the instructions. (No, it's not a motor mount wire.) 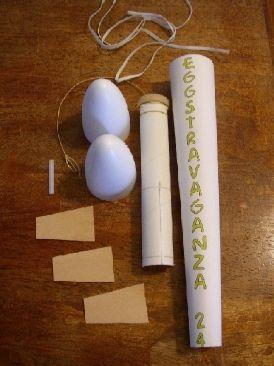 NOTE: Be careful when making holes for the launch lug. If you heat the wires and then apply them to the egg cone, the plastic will melt like a red hot knife through softened margarine. You need to just touch the tips of the wires to the edge of the egg cone and then remove. Don't keep pushing or you'll have larger holes than you need.

I found it unnecessary to have the launch lug anyway because at our club's meet, there were 3 custom built tower launchers, one of which would have taken this rocket very easily.

I replaced the elastic shock cord with about 12 feet of fluorescent nylon construction cord.

It is important to have extra parachutes! You're only allowed 2 real competition flights, and you'll want to take practice flights beforehand!

The 18" Hang Time parachute that comes with the rocket is too small for competition. I learned that when I saw a fellow rocketeer wrapping his 40 inch parachute!!! (And yes, he managed to fit it in his rocket!)

It wasn't suggested in the instructions, but I utilized a little "Fiber Fill" pillow stuffing from my wife's craft box to act as a cushion in the top and bottom of the egg cone (I found there was room for it).

I wrote my NAR number on the back along with the empty weight, weight with motor and finished weight.

Personally, if they gave an award for best looking egg lofter, I think I'd get it...but alas they don't. It looked really nice and clean and I was happy with it.

Flight:
I had 3 motors but only 2 flights because I ran out of parachutes. Both flights on D12-5 went straight as an arrow, and very high. I'd say it was close to ASP's predicted 682 feet. There wasn't any wobbling either.

Recovery:
Tips not included in instructions for parachute assembly:

I replaced the elastic shock cord with the fluorescent nylon construction cord, and put as much into the shroud as it will hold. Then a few sheets of Estes type wadding went into the top of the motor tube and followed by a 3 inch square of aluminum foil (shaped into a cone) into the shroud. On top of the foil went the shock cord and then parachute. The egg capsule just fit on top.

Ejection took place at apogee on both flights, however, the 18 inch parachute became entangled on itself, broke a couple of shroud lines, and failed to open on the first flight. On the second flight, the 30 inch parachute that I also purchased, became entangled on the sharp edge of the snap swivel, lost a group of reinforcement tabs, had some burn holes, and failed to open.

Despite the fall from apogee, both eggs did not break and I attribute it only to the "Fiberfill" cushioning in the capsule. I did see others "scramble" from less altitude.

I did see other flyers chutes who eliminated the snap swivel and they seemed to work fine. I also saw people with different competition chutes that weren't kits.

Summary:
This is a great competition kit, was easy to build, looks very nice, on the shelf, on the rack, and in the air! It will fly again but with a different parachute. The drawbacks are the snap swivel, which I would not include in the kit or in the instructions.

There was no mention of a piston or piston launcher and it would have been nice to know about that in advance. It could have been a note at the bottom of the instructions or even a basic plan to build one as many people utilized them.