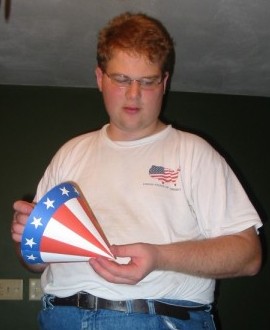 Construction:
The 29mm Cone rocket contains a 29mm motor tube, which loosely fits inside a larger diameter tube, that is used as the Cone's center tube. An elastic cord is included for recovery. Two pieces of foam board are used to make the centering rings. Several sheets of cardstock are used to make the body of the rocket. To build this rocket, you will need epoxy, white glue, scissors, and a hobby knife.

Before I started building the rocket, I went ahead and cut out everything that needed cutting. The nosecone, skirt pieces, tabs, and reinforcement straps are cut out of the poster board. A large and small centering ring is cut from the foam board. This is the trickiest part. First you cut out the inner and outer circles, making sure you also cut out the tab for the launch rod. Then you carefully cut the angle of the outer circumference. This is done by inserting the knife in a acute angle from the line, exiting just at the outer edge of the bottom of the centering ring. 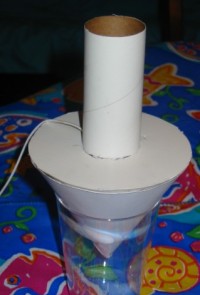 Construction of the skirt of the cone starts with gluing the two halves of card stock together. Once the glue is dry, the skirt is rolled into shape and the two halves are clued together. Then reinforcement strips are glued to the inside edge of the base of the cone. Once all glue has dried, I glued the nosecone assembly into the skirt.

Finishing:
The Cone rocket is pretty much ready to go as finished. They do recommend that you coat the rocket with clear coat to protect it from moisture. However, I could not find my clear coat so I had to skip that step. 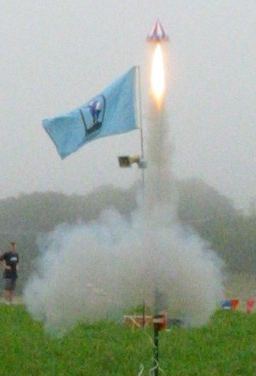 The first opportunity I had to fly my cone rocket occurred August 16th, 2003 at a Frontier launch in Halifax, MA. However, a Thunder Shower hit us so quick that I was unable to prevent my Cone rocket from getting damaged by water. Thankfully, Art was kind enough to send me a new skirt for my Cone Rocket. The next launch was scheduled September 6th. The launch was canceled, but that did not stop me from launching rockets with a friend. I meant to fly my Cone rocket with an E16 and F40, but as soon as I reached the launch site, I realized I forgot to grab my RMS 29/40-120 cases.

No big deal. I used a 24mm adapter and my RMS 24/40 case to launch my Cone with an E28-5T motor. Great flight, ejected after apogee. Then I launched it again with a aged G54-6W motor - using a Quickburst igniter - Great Flight!!! Ejection occurred after apogee. This would be a great rocket to fly with those Ellis G35 motors. To bad I am all out of them :(.

Summary:
Overall, the 29mm Cone rocket from Art Applewhite is a fun rocket to build and to fly. It is fairly easy to build, no finishing required. Due to personal experience, the Clear Coat is a good idea. On September 27th, I plan to fly my Cone rocket with an E16, and maybe a F40.