Brief:
Considered by many to be one of the legendary Centuri kits, the Taurus enjoyed a ten year run in the Centuri catalogs before inexplicably disappearing in 1981, followed by the whole company a short two years later. The Taurus was always a favorite of mine, but for some reason I always considered it too challenging to be a cloning project and as a result never gave it a serious look. That all changed when I stumbled across some pictures of a newly completed Taurus clone on The Rocketry Forum. In it's unpainted state it was obvious that it was in fact a fairly straightforward build--one I thought I might be able to handle and I immediately went to Mike Schmidt's Moldin' Oldies site to pick up the cones and transitions I would need to begin construction.

Buzz Nau has cleaned up the original Taurus decals and gone to the trouble of adding the roll pattern decal for the top body tube. This makes things infinitely simpler when comes time to paint and decal the Taurus. Consider yourself forever in his debt. 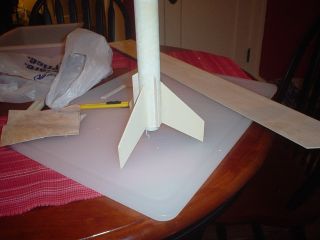 My first impression upon receiving the parts from Moldin' Oldies was that the Taurus was a surprisingly compact rocket, not the behemoth that I had always expected it to be. (I had somehow managed to come up with a vision of the Taurus as a rocket on par with the Centuri Super Kits from a size standpoint.) A dry fit of the parts confirmed this suspicion but that didn't stop me from installing a 24mm engine mount as the first step in the project, along with the obligatory 30" Kevlar® shock cord glued in between the centering ring and motor tube. The Moldin' Oldies parts are a very impressive set and needed only minimal sanding to fit perfectly into the Semroc and Estes tubes that I had cut for the project. As with all of my recent projects, I first sprayed the body tubes with a coat of primer to toughen them and make any sanding later in the build less stressful. This was followed by a coat of Fill 'n' Finish on the body tubes, a thorough sanding, then a repeat of the process.

With the body tubes finished I turned my attention to the cones and transitions. They all needed only slight sanding to remove some mold seams and some putty to fill some pinholes. This was where I made a mistake. Caught up in a bout of the dreaded "build fever", I put the whole superstructure together securely with epoxy despite having been told well before that the painting is much easier if done before putting everything together. (I made a similar mistake on the Vector V. Must be genetic.) Realizing my screw up put a damper on the project for me and I put it aside for several weeks so as to more effectively sulk about my stupidity. As it turned out, this didn't turn out to be quite the horrible mistake that I had mistakenly mistaken it for. Once I had recovered from my bout of cloner's remorse, the build progressed quickly. 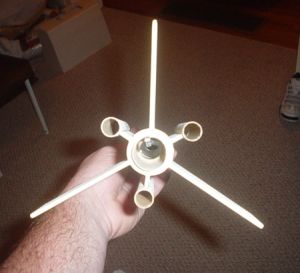 While not an ordinary in looks, the Taurus is pretty much a 6FNC when building time comes 'round. Having hand picked the hardest piece of 3/32" balsa that Johnny's Toys stocked, I cut the fins out, stacked them, and sanded them into as close an approximation of each other as possible. I left all of the fins crisply squared off to better retain some of the rocket's almost regal bearing, then attached the fins using LocTite gel CA. (I've found this to be somewhat more forgiving when it comes to repositioning fins.) Each fin was allowed to dry, filleted with Elmer's Wood Glue, then filleted again. At the end of this process the fins felt rock solid and I attached the pod mounts the same way.

From this point it was a simple matter of attaching the nose cone to the shock cord and parachute. I wasn't sure which method of attachment I was going to use with the hollow resin cone. I thought about drilling two holes in the resin and looping a piece of Kevlar® cord through, but I was afraid that the resin would be too brittle to handle the force of the ejection charge. In the end I decided to grind off the back end of the cone with my Dremel tool and then epoxy a balsa plug in place. (Use a mask during this process. I've heard that resin dust can cause extremely unpleasant allergic reactions if inhaled.) I made the plug by pushing the ground out end of the cone against a block of balsa that I bought long ago with projects like this in mind. After freeing the plug from the block, I epoxied it into place so that it was almost flush with the end of the cone. When this was dry I spread another coat of epoxy on the back of the plug, inserted and removed a screw eye, filled the hole with epoxy, then reinserted the screw eye. When this was dry I was convinced that I had a nose cone that would stand up to the shock of an ejection charge.

Finishing:
I had planned to start painting before attaching the pods, but Taurus guru Adam Palmer suggested a different strategy. Adam had sprayed the entire rocket gloss white, then masked off the necessary parts before proceeding with the gloss black, orange and silver. Bowing to the voice of experience and wanting white pods for my Taurus also, I decided to try doing mine in the same way. This turned out to me something of a mistake. Turns out I'm not that flexible when it comes to working my fingers into the tight spaces to mask the pod tubes and as a result, my pods need quite a bit of touch-up. It's not terribly noticeable but enough so that were I to do it again, I'd either do it the way I had originally intended or the all black way like Buzz Nau's version.

Whatever the case, this is the painting/masking schedule I'd suggest if cloning the Taurus and painting it in the Admiralty color scheme.

As usual, all painting was done using Valspar paints, which I've found to be incredibly compatible with each other. (Your results may vary, but there is a Lowe's five minutes from my house.) 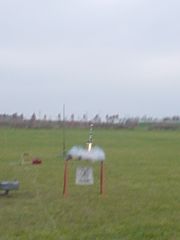 Flight:
With the holidays approaching I knew that I would have to seize any opportunity to fly or run the risk of seeing the Taurus gather dust until 2005. The day I chose dawned cold, cloudy and wet, and despite waking up early, a sinus infection made me feel like doing almost anything except flying rockets on a cold, muddy field. I hung around the house putting finishing touches on the Taurus until 2:00, took enough cold medicine to float a battleship, and headed for Johnny's to buy some motors. (I didn't want to get to the field and find that I had run out of my stash of C11-5's.) This side trip meant that I didn't arrive at VOA until 3:00, but I was surprised to find a decent crowd still hanging around and flying. The Taurus caused a fair amount of excitement as I carried it to the pad. (A lot of this excitement was because I had killed the previous two clones that I had flown there.) Before I could get signed in and hooked up, I was presented with the remains of one of these sacrifices, the upscale Groove Tube that had disappeared on my last trip to VOA.

Hoping that this was a GOOD omen for a change, I loaded the Taurus with a C11-5 and made the announcement. The first flight was everything I had hoped it would be. The C11 made for a slow lift off with a slight hiccup just after ignition. From here the Taurus cruised back over the flight line to somewhere near the 500' mark, tipping over slightly before the ejection charge fired. The chute unfurled nicely and the rocket was recovered without incident on the other side of the swamp. The second flight, also on a C11-5, was almost a carbon copy of the first but landed amid the thistles of the swamp. I considered calling it a day after the second flight as it was getting dark but decided to give it a try on a D12-5 instead. As usual, this turned out to be a mistake. I angled the rod slightly into the breeze, hoping that it would allow recovery somewhere on the field instead of in the swamp and I was dead right. The Taurus arced out over the trees to the west, tipping over just before ejection as on the two previous flights, then rode the breeze back to the soccer field where it recovered only a few hundred feet from the pad. The flight had been somewhat higher than the previous two but had not been high enough to make me consider flying it on the D12 on a regular basis. 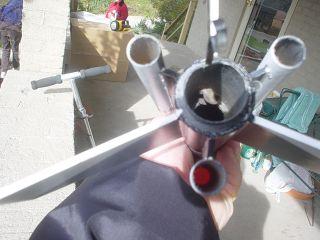 I didn't notice that anything unusual at first because I was busy refolding the chute and shock cord to place it back into the rocket, but when I went to take out the expended motor casing, the damage became obvious. Apparently the D12 ejection charge packed more of a punch than the C11 had because the engine hook had ripped down about 3/4" through the motor tube. This left a jagged gouge in the side of the motor tube that I couldn't possibly repair without ripping the whole motor assembly from the body tube. Even flying it as a friction fit bird in the future would seem like a risk, as the ejection gases would at least partially escape into the cavity between the motor tube and the main body tube, where they would eventually burn. Unfortunately at this point it looks like the Taurus is probably destined to become a display only rocket, which is too bad because it turned out looking and flying very nice.

Summary:
I'd have to say that this was a very enjoyable project. The Moldin' Oldies parts make it a very easy project from a construction standpoint and while painting the Taurus in it's "Admiralty" scheme isn't easy, it's definitely within the realm of most cloners. Flights were impressive with comparatively slow lift offs leading to very cool low level flights.

PROs: Another Centuri legend takes to the skies. Relative ease of construction. Overall sense of accomplishment at the end of the project.

CONs: Admiralty paint scheme is somewhat of a pain, but worth it in the end. Estes 44 Magnum ejection charges.