Brief:
The Panther Attack is a single-stage rocket from Cycline3 with the look of a missile. The rocket has 3 sets of 4 fins, a 12' elastic shock cord, rail buttons, and a rectangular Cycline3 Frankenchute parachute (mine is green with yellow puffy-strings).

Construction:
The kit came with a single cardboard body tube, balsa stock and template for the fins, plastic nose cone, 12' of 1/4" elastic shock cord, rail buttons, and a piece of card stock for making the centering-rings (see polyurethane method below). The sizable airframe tube is light and came with one considerable crimp in it, apparently damaged in shipping, although the kit was packaged very well for shipping. It didn't look to me like anything serious to worry about, so I proceeded with construction. The finished rocket has a sort of crimp visible on one side, but looks good overall.

The instructions were complete and simple to follow. The most intriguing feature of construction is the use of polyurethane glue in the construction of the motor mount. Paper card stock is used to make centering rings which contain the glue and align the motor tube but offer no structural support. The polyurethane glue, when expanded and dried forms a honeycomb-like matrix surrounding the motor tube, filling the void inside the airframe. I have used plenty of this type of glue for projects around the house and was well aware of the pitfalls of using too much--it keeps on foaming and expanding for an hour or so after application and can fill spaces unexpectedly. This happened to me in this case, as I went a bit overboard with the glue on the top end of the motor mount. I rammed a broom stick up through the motor tube every few minutes for a couple of hours to clear excess foaming glue from the front end of the motor tube. This was effective, if messy. Had I not been attentive and aware of the glue as it attempted to seal off the front end of the motor tube, flights would have require a bit extra black powder to effect deployment... In the end, I think this is a very good method of motor mount construction and I will probably use it in some of my other projects. 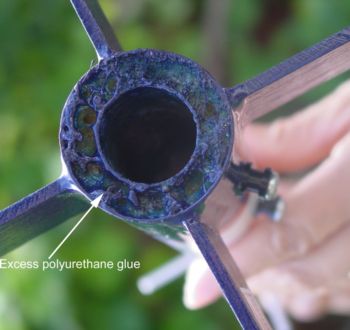 Naturally, I got way too much polyurethane glue on the aft end of the motor mount too, and I had to cut a bunch of this away later in order to tape my motor in place. I do seem to get carried away with the polyurethane glue, but there is something oddly satisfying about watching it foam up and expand.

The fins required a bit of sanding and shaping, which is tricky with the tiny front fins. The balsa was of good quality and worked well. I followed the instructions and mounted and filleted all fins with 5-minute epoxy. This worked well. The large aft fins feel very sturdy despite their size.

I installed the three-fold shock cord mount as suggested. This seems adequate and should not be difficult to replace when necessary.

I punched holes in the airframe for rail button mounting before finishing, but waited to glue the buttons in place until after finishing. There was no clear description of this process in the instructions but the requirements were obvious.

Overall, I built the kit as described. It required considerable time to deal with 12 fins and the unusual motor mount construction. I saw no defects in the kit or instructions except the omission of the point about rail button mounting and the boy tube crimp. The kit was satisfying to build and I plan to build the 3-motor fat rocket soon. 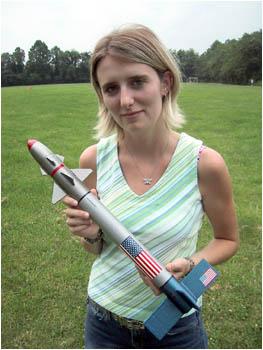 Finishing:
I sanded the fins a bit before installation. I sanded them a bit more after one coat of brown primer. I did not apply any more primer and I did not fill the fin grain or body tube spirals. The crimp in the airframe looked fine, so I did not try to cover it in any way. Structurally it looked to be OK. I then applied the top coats of paint, trying to approximate Sean's paint scheme, which I think is pretty cool. I didn't have quite the right paints around. I looked for some of the tool-box metal looking gray paint at Kmart but they were out. I improvised a bit and added a few pointy features in silver near the forward fins at the request of my 3-year-old daughter. "Dude, I don't mean to sound queer or nothin', but this paint job is HOT!" (Quote adapted from Orgasmo for you fans of Utah cinema.) I discovered once again, that paint fails to hide big globs of epoxy used in fin fillets.

Overall, I like the missile-look paint scheme, and I added the four US flag decals that came with the kit. I epoxied the rail buttons on after the paint was mostly dry. 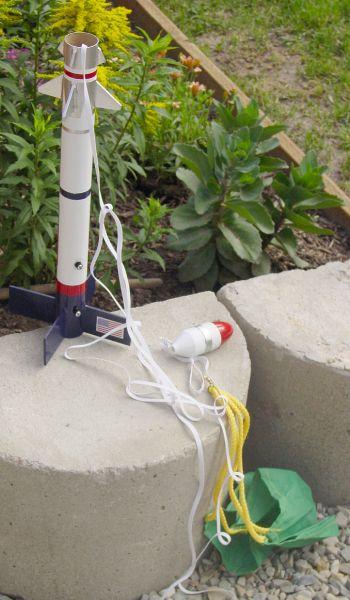 Flight:
I chose a single-use AT E15-4 for the first flight. I did not find a RockSim file online nor have I tried to make a RockSim model of the rocket myself, but this is the motor I had handy. Launch day was 80 degrees and sunny in the desert with a 5-10 MPH breeze. Visibility was limited only by the distant mountains. The shock cord and chute pretty much filled the airframe. I remembered to put in some wadding first. This was my first rocket to use rail buttons. I think I gummed up the igniter a bit, and the motor sputtered 5 or six times, causing the rocket to hop up and down and burp a few times on the rail but then it took off just fine. I think it probably went well over 1000' and deployment looked to be perfect. A longer delay might have been better. The long shock cord worked well and the chute appeared to be of the appropriate size for the rocket. It landed in dirt and suffered no damage. The flight was very nice to watch. I plan to launch again soon with an F motor.

Recovery:
PROs: Fine, fast take off. Reasonably straight boost, rail worked well. Recovery was good. No apparent wear to any of the parts.

Summary:
I would definitely buy the Panther Attack again. This was my first Cycline3 kit and I bought it because I like the design and Sean's paint job.