Brief:
This is a very tall 4FNC rocket that is very similar to the Estes Mean Machine and Sunward's CFX-Six Footer. There is no skill level associated with the 76er, but since both the Mean Machine and CFX-Six Footer are considered Skill Level 2, I'll rate this the same. It is easy to build and flies well. The attraction, especially for kids, is its size. The recommended engines are D12-3 and D12-5 with an estimated altitude of 500ft.

The kit is contained in a clear plastic bag with the engine mount in a separate bag with its own instructions. The instructions for the 76er are minimal and take up about one and a half 8" x 11.5" pages. So, even though this is a relatively simple 4FNC rocket, you need a few kits under your belt to be able to construct it successfully. I, in fact, did not construct the rocket reviewed here but oversaw construction by a 12 year-old rocketeer with a few rocket builds under his belt. We decided to make three modifications to the kit that we hoped would improve its performance. 1) We replaced the engine mount that came with the kit with a longer 24 mm engine mount from FlisKits to accommodate Estes E9 engines. 2) We replaced the standard body tube coupler between tubes two and three with a bulkhead. This allowed us to split the rocket into two sections making it easier to transport and to store. 3) We replaced the body tube coupler between tubes one and two with a BT-60 baffle from JonRockets. We used wood glue for the assembly.

We first assembled the FlisKits EMK24-60 engine mount. We made a modification to the modification by replacing the short engine clip that came with the engine mount kit with a long engine clip from JonRockets. Once the engine mount was assembled we set it aside to dry. We next assembled the BT-60 baffle. During the assembly we coated both sides of the top and bottom pieces and the inside of the cylinder with wood glue to give added protection from the ejection blast. While that was drying we glued body tube sections 3 and 4 together using the body tube coupler. This turns out to be tricky since the coupler is a tight fit when dry, and as soon as it hits the glue on the inside of the body tube, it expands making it very difficult to insert. Once tubes 3 and 4 were assembled, we glued the nose cone to one end. 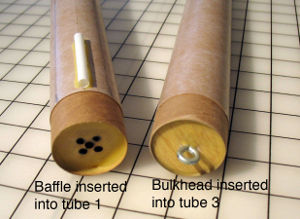 We constructed a bulkhead by cutting a circular piece of 1/8" scrap balsa wood to fit inside one of the body tube couplers. This was glued to one side of a body tube coupler leaving about 1/8" from one end (much like a baffle) and filleted the inside. The screw eye, that was to be used for the nosecone, was screwed into the balsa of the bulkhead. We then put a layer of glue on the bottom (exposed side) of the balsa wood for extra strength and set aside to dry.

When the engine mount was ready, we glued it into one end of a free body tube. This was now body tube 1. We attached body tubes 1 and 2 using the constructed baffle. Before gluing the baffle, we sanded it to make a loose fit into the body tubes. This made it easier to insert once the glue was applied. While that was drying, we glued the bulkhead into the bottom of body tube three. Following the directions, we next applied the four fins and launch lugs. Aside from the sparse instructions, there is one gotcha. According to the instructions, the shock cord is attached via a standard tri-fold mount and the instructions say to cut out the mount template. There was no template in our kit. However, this was no big impediment as we just made our own, glued the tri-fold assembly to the top of body tube 2 and tied the other end of the shock cord to the screw eye of the bulkhead. We didn't assemble the parachute as I already had several.

Finishing:
We gave the fins and nose cone three coats of sanding sealer, sanding with 400 grit sandpaper between each coat. We then primed everything with Krylon white primer, four coats with sanding using 600 grit paper after each coat. The entire rocket was painted with three coats of Rustoleum Painter's Touch Candy Apple Red. Two vertical stripes the length of the rocket as well as the nose cone were masked with Frog masking tape and the exposed areas painted with four coats of Rustoleum Painter's Touch Deep Blue Gloss. Once the paint was dry, the masking tape was removed and I was a little surprised to see some bleeding of blue onto the red. I've had good luck with Frog Tape before and so I think this has to do more with there being 24 feet of abutting paint lines rather than anything else. We decided not to touch up the bleed marks, as I am sure this rocket will get it share of post-flight repairs. Finally, the 76er was given a few coats of Rustoleum clear coat.

Flight and Recovery:
The first two flights were with an Estes D12-3 using and adapter to accommodate the difference in size of the engine. It was a windy day. Both flights struggled through the wind but not much wind cocking, reaching about 300ft each time. Each time, the parachute deployed just after apogee and there was a long walk for the recovery. The first flight we used a single sheet of wadding and the second flight with no wadding. Each time there was no heat damage to the parachute. A launch with an E9-4 will have to wait for a calmer day.

Summary:
PROs: This is a very nice Skill level 2 kit, and even though it is a simple 4FNC rocket, its size makes it attractive, especially for kids. The sheer size and simplicity of design is a blank page for creative paint schemes and decorations, which is another attraction for young rocketeers. The rocket is easy to prep for flight, flies well, and the size also helps with recovery! You won't loose this one.

Cons: Skill Level 1 and 2 rockets, because they are designed for beginners and novices (I include myself in the latter), benefit greatly from detailed instructions with good illustrations, and such instructions are becoming the standard for the industry. The instructions for the 76er are minimum at best and the kit would benefit greatly from more detailed and illustrated instructions. The size of the rocket is the attraction, but it makes it difficult to transport and store. Splitting the rocket in two, either through the use of a coupler (ala Estes Mean Machine) or replacing one body tube coupler with a bulkhead, as we did here, would be a significant improvement. And finally, replacing the 'D' size 24mm engine mount with one that can accommodate 'E' size engines would also improve the rocket.

This rocket is fine on a D12. Obviously an Estes D lifts more weight than an Estes E. A D12-5 leaves PLENTY of time for deployment.