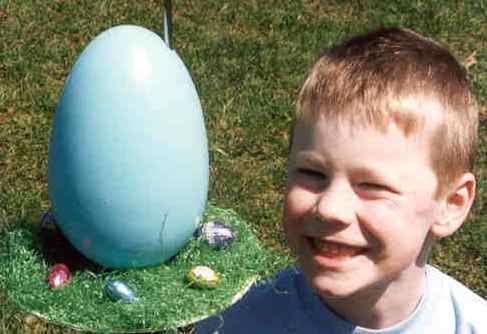 I saw these plastic eggs on sale at K-Mart, just begging to be blasted skyward. I didn't want to add external fins, but I was fairly certain that no amount of nose weight would make the egg stable. My solution was to add a draggy base disk, covered, naturally, in green paper Easter grass. Holes drilled through the base disk and egg accommodate the launch rod, eliminating the need for an external launch lug. Recovery is by rear ejection of motor mount and parachute.

Prior to launch, put a handful of wrapped chocolate Easter eggs in the grass on the base disk. They will disperse in flight - a wonderful labor-saving alternative to the tedium of hiding Easter candy one piece at a time!

Central tube, 40mm x 8 1/2" long (liberated from a roll of shelf paper, but a 38mm motor mount tube could be substituted)

2 Centering rings, cut from hardboard, to center 24mm tube in the 40 mm tube

Center the 40 mm tube on the blunt end of the egg, and trace around it. Carefully cut out the traced circle on the egg. Drill a dozen 3/32" holes around the cut out hole, and several more in the tip of the egg. Epoxy "rivets" will fill these holes during assembly, adding to the strength of the assembled rocket. Sand the blunt end around the hole to create a small flat area for gluing the hardboard disk. Sand or scrape the interior of the egg wherever glue will contact it. Wash the egg with soap, rinse well, and dry. Cover the drilled holes with masking tape, to prevent epoxy from running out during assembly.

Glue the two centering rings onto the 24mm motor tube, 1/2" in from each end. When dry, drill a 3/32" hole through the forward ring, thread the free end of the nylon cord through it (Make sure the cord is threaded through the 40mm tube first!), then tie the nylon cord around the 24mm tube. Glue securely. . Sand the centering rings so that the motor mount assembly slides with minimal resistance inside the 40mm tube.

Preparation of the Base

Paint the hardboard disk white, and make sure the central hole fits snugly over the 40mm tube. 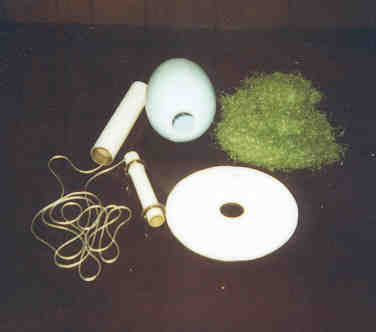 Figure 1 shows the major subassemblies for the rocket

Test fit the 40 mm tube into the egg, centering the forward end (with the nylon cord) in the pointy egg of the egg. Mark a spot on the egg 1/2" out from the forward edge of the tube, along the seam. This will later be used to drill a hole for the launch rod. Remove the tube, slather a couple of tablespoons of mixed epoxy into the AFT end of the egg, reinsert the 40mm tube, and stand the assembly upright to allow the epoxy to run to the bottom of the egg and glue the 40mm tube in place. Allow the epoxy to cure.

Stand the egg with the forward end down, and pour a couple of tablespoons of mixed epoxy straight down the center of the 40mm tube. Pour in 1 oz of lead shot while the epoxy is still liquid. The epoxy will run through the notches in the forward end of the tube, gluing the tube in place from the inside and out. Allow the epoxy to cure. Remove all of the masking tape used to cover the drilled rivet holes in the egg.

Slide the hardboard disk over the central tube. Apply a generous amount of epoxy to the disk at the disk/tube junction, then slide the disk up to be flush with the bottom of the egg. Put a wrap of masking tape around the junction to keep the epoxy in place, and position the egg upright while the epoxy cures. Remove the tape.

Drill a 5/16" hole into the top of the egg at the position marked earlier. Turn the egg over, and mark a spot on the bottom of the hardboard disk 1/2" out from the central tube, in line with the hole drilled from the top. Having both holes line up with the seam on the egg simplifies this alignment. Drill a 5/16" hole through the hardboard disk and into the egg. The launch rod will fit through these holes.

Cover the upper surface of the hardboard disk with a generous amount of white glue, and cover it with a thick layer of Easter grass. Press the grass down into the glue to insure good adhesion. Allow to dry.

Attach an 18" parachute to the motor mount tube, between the centering ring. I like a mylar chute, as it's natural springiness helps it unwrap from the tube faster during deployment. 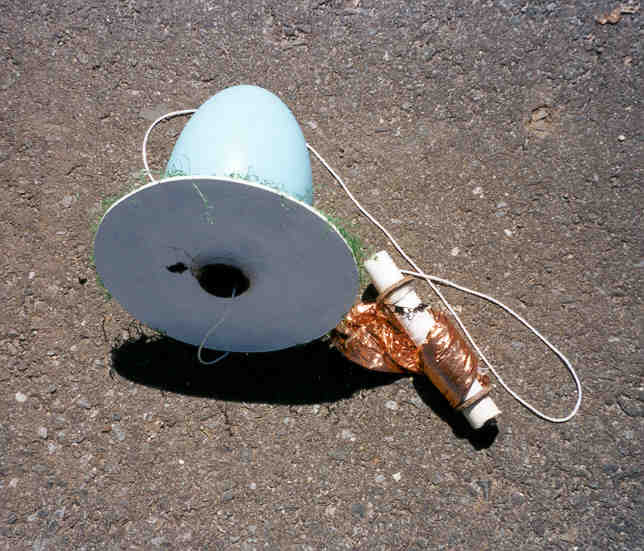 I recommend an E18-4W 24mm reload, with half of the ejection charge left out - there is very little headspace for the ejection charge to pressurize. A shorter delay would be an improvement, if only one were available. An E15-4W single use engine should also work, but I'd be inclined to use a longer shock cord in that case.

At the pad, insert an igniter and slide the egg over the launch rod. Put a handful of wrapped Easter candy in the Easter grass around the base of the egg. Warn the children that have inevitably assembled at the launch site to stay back until the all-clear is given after the flight. No one is allowed on the field until the Egg has landed and the ejection charge has fired!

The E18 lifted the EggLofter off of the pad with authority. The draggy design allowed for a flight that was slow enough to enjoy. The egg flew through one vertical loop while under power. This flight behavior was carefully designed into the airframe, so as to maximize the dispersion of the chocolate eggs being carried aloft. (To those who doubt the veracity of this statement, I can only say "Hey, YOU try to calculate the CP of this beast!") Rocketeers desiring a more traditional up-and-down flight path may want to add additional nose weight and/or increase the diameter of the base disk when constructing the rocket.

The ejection delay was too long, as expected, but the egg landed without damage during the coast phase. When the ejection charge fired, the parachute deployed perfectly, gently lowering the engine pod back to the ground. The crowd went wild; and the flight was considered a critical success. 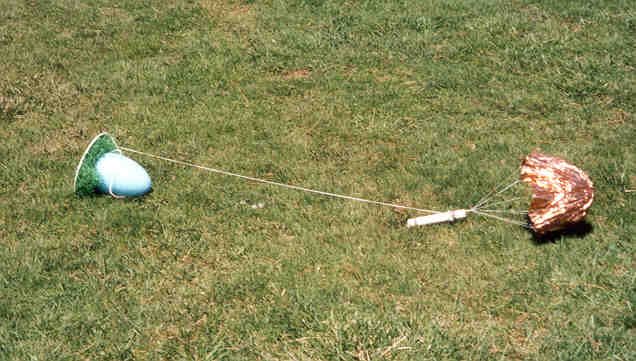 Figure 4 shows the EggLofter after touchdown.