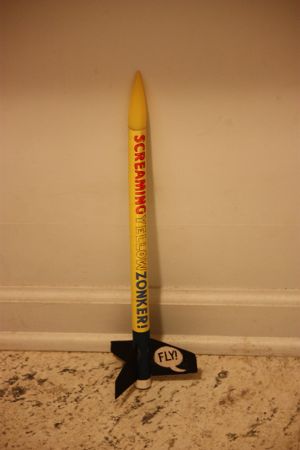 Brief:
I took a Totally Tubular and added an extension to the body tube, spin fins, and a new theme.

Modifications:
Originally I modified it to become a spin-stabilized two-stager, but that didn't work, so this'll describe how to convert a regular kit to a 'Screaming Yellow Zonker!'.

Assemble the top end--nose cone, shock cord, and streamer--as normal or put in whatever recovery system you want.

From the balsa, cut three medium-sized fins. I made mine trapezoidal with 2-inch-long roots, 1" tips, 2.5" spans, and flat bottoms. Space them evenly towards the bottom of the blue (2.5" long) tube. On the trailing edge of one fin, add a 0.5" x 2.5" spin tab canted at 45 degrees. Add a launch lug in the root joint of one fin and you're done. I recommend filleting all three fins and the spin tab. 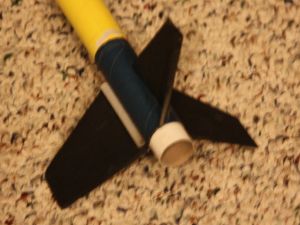 This design can be easily up/downscaled or shortened or lengthened. I used a Totally Tubular kit simply because it was cheap. Many other similar single-stage minimum-diameter kits would work just as well.

Finishing:
I attempted to finish mine in the general style of a A HREF="http://en.wikipedia.org/wiki/File:Zonkers3.JPG">Screaming Yellow Zonkers box. (Yes, I'm too young to have experienced them originally. The name was suggested by my dad.) The important parts are having 'Screaming Yellow Zonker!' written in red, yellow, and blue letters on the main body tube and having the fins painted black. On one fin, draw a white speech bubble with 'Fly!' written in it.

Flight:
Recommended motors are the B6-4 and C6-5, especially the C6. C6-7s and B6-6s will work with late ejection and you can use A8s and B4-4s, however, the smaller motors will not make the full effects. 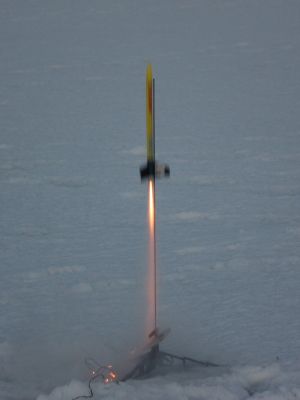 I used three sheets of wadding and masking tape to retain the motor.

Because of the spin, it flies fast and straight and barely weathercocks at all. You can launch it on a smaller field than you could normally. It also stays fairly low--about 10% lower than an Alpha III--because of the drag from spinning.

If you use a larger motor, particularly the C6-5 (or a composite D if you have a very large field), then it spins very fats and makes a nice spiral smoke trail and whirring noise. It's a very cool effect and not what you expect from such a small rocket.

The first flight was on a C6-5. It roared off the pad to about 900 feet and made the spiral smoke trails and noise. Ejection was out of sight and it came back about 400 feet away because of the wind.

Second flight was on a B6-4. Not quite as spectacular, but it landed very close. Third flight was on an A8-3 to about 300 feet. It was not very interesting--the spin had almost no audio/visual effect at those low speeds.

Recovery:
I used a 1" x 18" streamer that came with the kit. It gives a fairly reasonable descent rate, but because I did not fillet the fins they tend to need being re-glued. The three sheets of wadding I've been using is adequate and the streamer has not been damaged.

Summary:
The Screaming Yellow Zonker! is another of those fun rockets that doesn't take itself seriously. It's adaptable to any number of basic kits and is easy to build and has unusual flight characteristics.