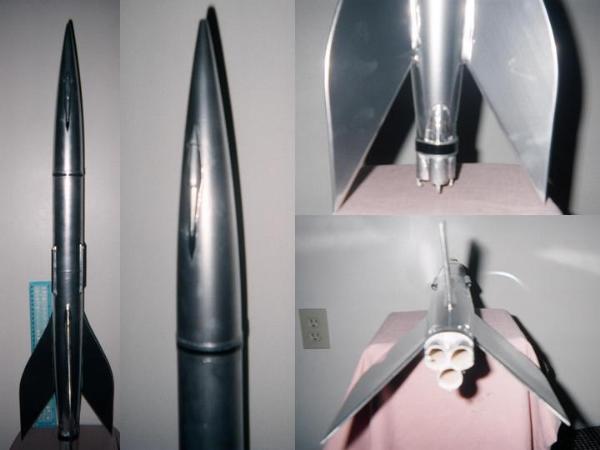 Who would have believed, that in the early years of the 21st century, minds immeasurably superior to ours still wouldn't have learned their lesson, and we'd have to kick their Martian butts all over again? No germs, this time. This time it's personal. This time we're taking the fight to them -- on Mars.

This is Thunderchild, named for the Royal Navy ship that died protecting Londoners escaping via steam boat from the Martian tripods in War Of The Worlds (at least in the musical version). Designed for flight direct from Earth surface to Martian atmospheric tactical use and return, the sleek aerodynamic shape hides a rock hard heart. Martian cylinder launchers are targeted by triple kinetic kill rocket launchers midships.

This is my DESCON 14 entry. It's essentially 12" of BT70, with nose and tail both Apogee PNC56 cones. The tail is cut to allow projection of the 3 x 18mm cluster motor tubes**. The motor mount is from a 3x18mm in BT70 cluster mount from Thrustline, modified by using 12" long motor tubes and 2.75" engine hooks, with the regular ply centering ring fore and a BT60 coupler epoxied against the aft inside end of the tail. The nose cone cut for the boat tail was cut off even around the shoulder, and the ply centering ring epoxied to that after the fins had been glued in place. A ring of BT60 couple around the external part of the motor tubes anchors the engine hooks.

The cockpit (second panel) is a 13mm ogive nose, cut lengthwise, the bottom half cut off of one, and the remaining top half inserted backwards under the longer half. This is surface mounted to the nose with epoxy. The "rocket launchers" around the middle are 1/4" styrene tubes, with an internal diameter of 7/32", making them 3/16" capable launch lugs. Highlights on cockpit, launcher/lugs and around the motor tubes is Pactra striping tape. A band of very thin styrene was wrapped around the very top of the body, for both cosmetics and for anti-zipper.

The fins are 1/8" basswood with tabs that fit through slots in the tail cone (though not all the way to the motor tubes) for gluing inside the tail. Fin design is fairly directly from the Concorde's S shaped leading edge and straight trailing. The fillets are far thicker than strength calls for; they are two layers of epoxy, for a nice smooth curve for cosmetic reasons.

The finish is Rustoleum chrome/stainless steel*, over a healthy layer of white satin finish* for spiral filling on the body, and over flat white primer on tube and cones. Recovery is 150 pound kevlar cord anchor, looped double, and run between the ply centering ring and the body and glued in place with a loop left open. A doubled loop of ¼" elastic shock cord (3 feet exposed cord) runs from the anchor loop to the nose cone. An 18" Rocketheads chrome mylar parachute brings it home. No nose weight was needed or added, except the cockpit added a bit.

Loaded for flight, it comes in at 14 oz. (CG right at the foremost point of fin/body joint), a bit heavy for C6's, so the faster boost C5s (3 sec. delay) were used, as was a 4 foot rod due to lugs being a foot up the rod already. After a brief display of three flames on the pad, the rocket lifted quickly and straight. Ejection was about 1 second past apogee and deployment was immediate and without incident. Landing on soft soil, one of the fin cut an inch or so into the dirt, but no breakage or scuffing occurred.

* Rustoleum's metal finish paints, especially the chrome, are very slow drying. Days later, touching them can leave fingerprints. Not smudges - real ridged prints. Same with the satin finish. It makes a great spiral filler and provides a great base for the chrome (which can be painted over the satin in an hour) but expect it to take between one and two weeks to dry completely. As the chrome (and other new Rustoleum metallics) says, do not use clear over coat. It won't help. It will hurt. The chrome will turn into semi-gloss grey. Once dry, the chrome paint has a durable surface. If you want a clear coat anyway that won't mess up the finish, use Future floor wax (I did).

** Acknowledgment and thanks to Sandman for cutting the complex curve of three cylinders projected axially through an ogive.