Other Product ReviewsReviews by Morgan HendryReviews of Strap On Boosters

Otherwise known as parallel staging, this technique allows a higher lift-off power while being able to discard useless weight after it is no longer needed. The space shuttle employs solid rocket boosters which do the same thing. The application in rocketry would be a lower cost payload boost because you could use lower power engines. The problem, as I discovered, occurs when you have a large mass in the rear of the rocket, making it negatively stable. The solution is to mount them towards the front of the rocket. I may try to put them on my Mean Machine.

My 12" long boosters are made of of BT50 with a BT20 (18mm) motor mount centered with heavy duty (green) centering rings. To eliminate wadding, I used a rear ejection system with the BT20 and the centering rings as the core. It returns on streamers. It has small delta fins (probably not needed). They use dowels/launch lugs (3/16") to hold onto the main rocket until drag separates them. 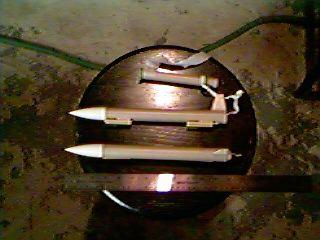 I finally got to launch the boosters. The night before I the launch, I hot glued 8 segments of plastic straw to the sides of my Mean Machine so I could mount the boosters. I mounted the boosters' dowels in their straws and loaded a B6-0 engine in each. I then loaded a D12-5 in the Mean Machine. After mounting on the pad and checking the wiring for the three ignitors, I pushed the launch button. All three engines lit and the rocket cruised off the pad. Immediately after the B6's burned out, the boosters dropped off and popped out their streamers. The Mean Machine coasted way up and popped out its chute. A beautiful flight overall and a great end to this project. Thanks to all who helped to make this happen.