Brief:
This is a semi-scale model of the Jupiter C. Dr. Zooch has coined the phrase "Ant Scale" to describe his models. This rocket easily fits that description. The rocket is propelled by 18mm motors and comes with the standard "trash bag" parachute. Don't be fooled by the scale appearance. Often, scale kits sacrifice performance for good looks, but that's not the case with this kit. Reaches dizzying heights on C motors. 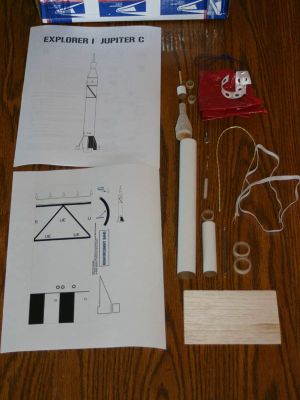 Dr. Zooch is a fellow MDRA club member who asked if I would beta test this kit for him. Without hesitation I accepted the request. There was in a bit of a time crunch to get this kit tested and released, so I began working on it as soon as it arrived via Priority Mail.

I read through the instructions before building since this this fits into the whole Zooch experience! I wanted to be thorough as this was my first time beta testing for anyone. The sarcastic humor and well illustrated instructions make the steps go by very quickly once you get started.

Dr.Zooch has you begin with the Explorer I spacecraft. The balsa transition, the two smallest centering rings, wood dowel, and short BT-5 get used here. An emery board is required to carefully shape the upper part of the transition. This was not very difficult at all, although I must admit, I was a little nervous about shaping my own balsa. There was no need to be.

The balsa spacecraft has a dowel shaped protrusion that extends from the top. The small centering rings are supposed to slide over it and get glued into place. This was a very tight fit, so I removed a layer of paper from the inside of each ring and they fit perfectly. The BT-5 slides over the rings and completes the "canister" part of the spacecraft. The Explorer rocket on top of the spacecraft is simulated with the 1/8" dowel. You need to make a provision for the dowel by using your own drill bit to make a small depression in the balsa core. Very easy to do. 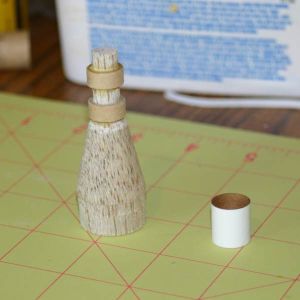 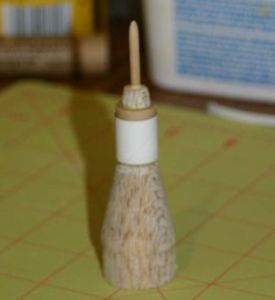 After the glue had dried, I filled the balsa with Elmer's Fill 'n' Finish and set it aside to dry.

The motor mount was a standard 18mm assembly. While that was drying, I cut out and applied the body tube wrap.

Finishing:
There is no painting required for the main tube, however, it's good idea to clear spray the wrap with Krylon Crystal Clear or similar. This protects the wrap from dirt and smudges as your applying it to the body tube. Follow the instructions when applying the wrap. The technique described in the instructions works so avoid the temptation to deviate.

The fin assemblies are next. Each fin is comprised of two pieces that get glued together. Set them on wax paper while they are drying. Once the glue was dry, I filled and painted the fins separately but masked the root edge. This will give a better gluing surface later on.

While the paint on the fins dried, I sanded the Explorer spacecraft, primed, and painted. This took very little time and came out great.

After the fins dried, I cut a slot in the wrap so the fins could glue directly to the body tube. I used white glue to attach the fins and made small fillets as well. Follow the diagrams in the instructions to apply black paint to the appropriate fin. I used regular Testor's gloss black enamel to hand paint the black areas on the fins and very tip of the spacecraft. 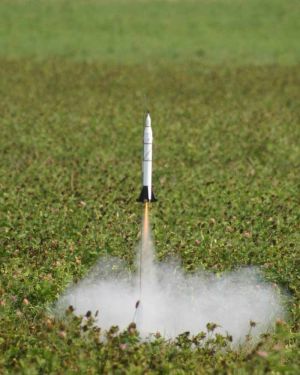 Flight:
My initial test were on B6 motors. These are ideal for this rocket. Anymore than that and you take a chance at not getting it back.

During flight testing we realized the engine mount needed to be moved aft just a fraction of an inch to prevent scorching the fins. Dr. Zooch immediately made adjustments to his own prototype and flew his the next day and the problem was solved. Despite moving the motor mount location, the rocket was super stable and flew like a champ. After hearing how well the flight tests went on a B, Dr. Zooch prompted me to use a C motor. Holy cow!

Using the RockSim program, it shows getting close to 1500' on a C motor, and I believe it gets every inch of that in reality. Very impressive flights from this little monster.

Recovery:
Fortunately on the first C flight I opted to put a streamer on it considering the diminutive nature of the rocket and light to moderate winds that day. That turned out to be a good choice. Had I used a chute, I'm not sure I would have gotten it back. The little dowel on top of the spacecraft got jarred out of the hole slightly but was easily fixed on the spot with some CA. You can't even tell it was damaged.

The plastic chute that came with the kit partially melted on the first flight. It still deployed well enough to slow it down with no sustained damage. The only hitch I have found with the Zooch kits would be the parachute. Despite trying different wadding techniques, they seem to be susceptible to melting. I've got enough homemade chutes and spare plastic chutes that it's really a non-issue for me. He'll tell ya straight up, they are cut from trash bags. Worst case, you grab a new trash bag from under the kitchen sink and cut yourself a new parachute.

Some Kevlar® string is included as a leader for the elastic shock cord. Dr. Zooch recommends anchoring the Kevlar® with the popular tri-fold method. I used CA for this and it has held up just fine. The leader shows a little wear after several flights but is still intact.

Summary:
I was very happy with the way this kit turned out. Hard to believe this was a beta kit. There were only very minor adjustments needed before it was released. Anyone building and flying this kit will be in for a treat.

Only con was the chute.