Brief:
I'd wanted to try a Dr. Zooch kit for some time. I decided on the Mercury Redstone. I picked this version as it's the closest to my original Estes Redstone--BT-60 based.

All the other reviews are right about the first impression. That box seems small! Then again, it's really no smaller than a kit in a clear bag hanging on a wall in a hobby store.

I'll jump ahead. Don't look for a flight review, I'm not flying this one. It's the first rocket I've built in years I'm keeping to display. It was that good of a build. It's a keeper. 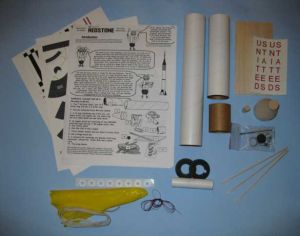 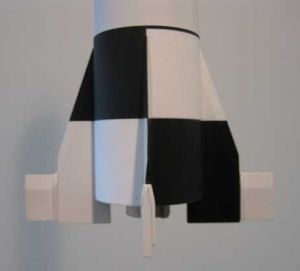 Construction:
I started construction as I always do, by sanding square the body tube ends and strengthening all (exposed) the inside body tube ends with CA. The nose cone was sanded lightly with 400 grit sandpaper. I didn't want to sand off too much as it could effect the fit of the printed overlays.

The C60-4 coupler did need a bit of sanding to get a slip fit inside the BT-60 tubes. I wanted a slip fit, I didn't want to take the chance of anything freezing up when the tubes are glued together.

Be sure you wipe down the laser cut centering rings with a paper towel. There is some black laser burns that will rub off on the white engine mount tube.

The instructions say to cut the reinforcement band from the wrap sheet. I couldn't find it anywhere. No big deal, I just cut a rectangular piece from an un-printed area on the wrap sheet.

The engine block was very loose in the engine mount tube. No friction fit at all, it would simply fall out of the tube. So I ran white glue beads around the outside of the ring to widen the diameter. Instead of the Estes style shock cord mount, I used 100lb Kevlar® tied to the engine block.

You get to pick which BT-60 tube to glue the engine mount in. I chose the shorter tube for the engine mount and lower half of the rocket. By picking the shorter tube, the reach is less so I can put a fillet around the top of the engine mount coupler. I used the rounded back end of a paint brush. Also, with the coupler closer to the rear, there is less chance of parachute obstruction. There shouldn't be any problem though as the BT-60 is a wide tube.

You are directed to cut out one of the three different capsule wraps, form and glue it in a cone shape. The instructions show a tab but the wrap sheets don't have a printed tab. Not a big deal, I just allowed for one when it was cut out.

I probably shouldn't have sanded the nose cone before applying the wraps. I didn't sand much, I didn't want the shrouds to fit too loose. The nose cone was rough, but those raised grains would have helped the shrouds fit better.

I did add a 20lb paper wrap around the recovery compartment area before the printed wrap was added. It raised the outside diameter and made the wrap fit tighter.

The antenna wrap had nothing to glue around. It's conical edges alone glue to the "strange black dot". The top nose fairing glues edge to edge on the antenna fairing. Structurally it's OK as the hollow paper antenna housing and nose fairing are covered by the escape tower.

The finished nose cone looks great! As the other reviewers have said, the finished results are surprising.

I made the tower twice as the first one looked a little thick. All the pieces are cut from the same diameter dowel, but the instructions template shows the diagonals and cross members are a thinner diameter that the verticals. 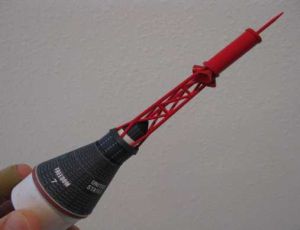 I made more pieces from toothpicks. I thinned down enough toothpicks to make plenty of the cross members and diagonals. Before cutting the pieces to size, I sealed the toothpick dowels with two coats of sanding sealer then sanding. The second finished tower looks a little closer to the truth.

My mistake! I built the tower away from home from the cardstock template without the instructions handy. I made the mistake of adding the lower cross members to the initial side assemblies. They should be glued on after the tower is glued to the top of the antenna fairing. Before I realized the mistake, I couldn't figure out how the tower was supposed to slide down 1/16" to 1/8" over the top fairing. Mine sits right on top as the cross members get in the way. Oh well, it looks OK anyway.

[Tip: To hide the antenna fairing shroud seam, line up one of the vertical tower pieces over the seam line. When cutting off the (angled) tips of the LES nozzles, try to cut the narrow end angle so the seams are on the inside.]

I painted some toothpick dowels before cutting them into the Inverted "V" Support Legs.

Maybe I've gotten lazy over the years. I've been building a lot of simpler sport models. The fins were a bit of a challenge.

You must use a sanding block to form the knife edge taper on the main fins and steering fins. For a little more detail, I added fin tip plates made out of laminated cardstock. I tried to replicate the old Estes kit look.

Finishing:
Fin masking is a bit of a chore. I set the fins against the lower body tube wrap to get an accurate masking line position. Most fins mask a separation of black/white or white/black depending on the position. No two sides of a fin are the same. You have to mask each fin one side at a time.

I got clean lines using regular clear tape. At first I tried the removable clear tape, but it didn't hold well over the tapered front edge.

You are supplied with two sets of "UNITED STATES" decals to go vertically down both sides of the body tube. They were printed on the Bel decal paper stock and pre-sprayed with a acrylic sealer. The clear sealer seemed thick, but there was no problem putting the decals in place. They were shiny, but a spray of dull clear coat should take care of it.

Flight:
I didn't fly this one. It'll be a display model for now.

Recovery:
The Estes tri-fold shock cord mount was replaced with Kevlar tied to the Engine Mount. If I ever get the guts to fly it, I added a 12" black garbage bag parachute of my own for the capsule. I tied it in a harness so it would fall with the base shoulder first, not the escape tower first.

Summary:
What a fun build. After 35 years I feel I finally did a respectable job on the Redstone escape tower. I had doubts about the pre-printed paper wraps, but the end product looks great. I'm looking forward to building another kit from Dr. Zooch.