Brief:
This is a "jet fighter" style rocket that was designed to look like a target drone. The Snarky is single staged and comes with a 32" parachute 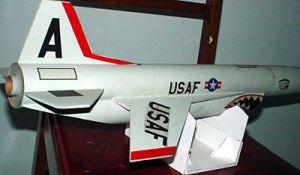 The instructions from DynaStar were great! Even as tricky as some of the steps were such as cutting out the lower intake scoop, these instruction could only have been better if someone from DynaStar came and sat down beside you to show you how it's done.

The assembly wasn't anything to be nervous about for anyone who has a few skill level 3 rockets under their belt. The only tricky part was cutting the intake scoop. To make this as easy as possible, DynaStar not only included some great wrap around templates to place on the tube to make your cutting lines, but they also included a great set of cardboard stands that held everything together as the glue dries. If I were to give one word of caution, it would be to take your time cutting the intake scoop. It is very easy to want to just cut through but that increases your chances of crushing the tube as once you cut it and it will loose most of its rigidity.

There were no special tools needed at all. I use Aleene's wood glue for all my rockets and this one was no exception 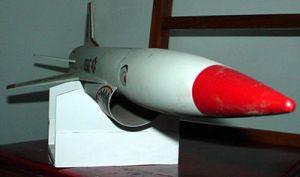 Finishing:
Finishing for this bird is the best part! DynaStar included the greatest decal set I've ever used. What could be greater that having that classic mouth full o' teeth and the evil eye? This thing just screams "get outta my way or I'll eat you alive"!

Just two coats of primer and then I gave it two coats of aircraft gray vs the white that DynaStar used. I also painted the nose red which added to the great looks of this bird.

Flight:
For my first flight I used a D12-3 and the chute that came with the kit and packed it with dog barf. It left the pad a little slowly but gracefully. It went straight up and then arced over slightly before the chute popped. The way this bird looked was great! Even though the chute popped, it did not open and the Snarky landed hard. There was no damage though.

Second flight was the same. I thought that maybe the first flight was a fluke or I packed the chute too tight.

Third flight was again on a D12-3 but with a 32" nylon chute. This flight was great again and well within sight. When the chute popped, it opened this time. It came down 100' from the pad.

I was out of D12-3 so I went next with a D12-5 for flight #4. The extra delay had a great effect as it was great to see this bird dive down for a few seconds. You would swear it was in attack mode! The chute then popped and it came down gracefully. I have abandoned the stock chute altogether now.

Fifth flight was on another D12-5. All was well until it popped a fin on landing. No problem there, I just need to glue it back on.

For the sixth flight I decided to use my nifty new Aerotech 24mm reload setup with a F24-5. It took me a while to get this candle lit, as it was my first reload. I was trying to get the Copperhead to work but sometimes you gotta know when to give up. I finally got a set of igniters from Quickburst and these worked great. This thing took off! It roared up and caught a crosswind which carried it a little downrange and out of sight. It must have been well over 1000' as the rest of my flights were consistently around 400'. I was glad I put a smaller chute on it that day because I had to walk at least a half mile through newly plowed field to get it back.

This rocket is my all time favorite. I'll never tire of watching it go up so gracefully and then turn into its dive....

Recovery:
This was my first static shock cord, I was a little worried about the "give" when it popped the great looking nosecone off, but it worked flawlessly every time. I have had no zippering, no damage at all except for one popped fin even though it went through two flights with the chute not opening. You can set your delay to right around apogee, but I think it's more fun with any fighter style rocket to give it some extra delay and let it dive before ejection.

I did not like the stock chute at all. I could never get that dang thing to open.

Summary:
I cannot say enough about this rocket. It looks great and flies just as good. My only wish is that they include a better chute...

I also thought this was a fun rocket to build. First move away from 3FNC for me. I think this would be a good kit for anyone who is looking for a first more complex build, mostly because the instructions are so complete it's like having someone look over your shoulder! The only real tough part is the air scoop and as long as the directions are followed and the builder works slowly it will turn out fine. The only change I made was to add a Fliskit baffle and the Dynastar 36"nylon parachute (way overkill, it's a real light rocket and almost free falls at a safe speed). Lots of nice stickers to spruce up the look. Some might not like the stickers, but sticker or decal has never been a real issue with me, both work. Really want to send it some on bigger motors!

This is yet another great kit by Dynastar / Apogee Components. The kit arrived immaculate the instructions were prefect. I don't think I've owned a rocket folks enjoy holding and discussing just as much as seeing it fly. I have only two concerns: the stock chute is too big constituting a zipper hazard and no spacer ring is provided for D size engines.

Although this is a well designed, nice looking kit with good instructions, my kit had very poor wood selection and the worst die cutting I've ever seen. Wood parts were crushed in the die cutting process, some fin parts had lost tips and points and had to be re-cut. The root edges often had been undermined by the die cutting, requiring large amounts of filler to restore them. The wood was of inconsistent quality and often fin edges disintegrated while trying to hold an edge while shaping. In an age of laser cut cuts this is unacceptable. One of the cardboard body tubes was severely crimped in two places...I had to study the plans carefully and plan ahead to get the crimp placed in an area that would be cut away when the air scoop is fabricated. One crimp is still visible. Given the price of this kit, I think we deserve better. Before you take delivery on the kit, study the parts and wood and then decide if you want to invest time and wood filler and/or re-cutting fins from quality stock before you build.

I bought my kit around the same time as J.S. (March 23,2007) but my kit was top quality. It arrivied in the mail in perfect condition and was a interesting build. The scoop was a new challenge and not for the faint at heart. The end product though is one BAD ASS looking rocket that flies as well as it looks. I also agree with the other remarks about the parachute. Mine came with a 32" plastic one which I ended up swapping out for a 24" nylon one after a couple of flights because the rocket drifted to long and far with the stock chute. This rocket is now my favorite rocket to fly, so much so that I even kit-bashed a Goony version (photos elsewere on this site).