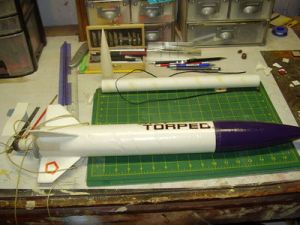 Brief:
This was a recycle of a Dynastar Sky Torpedo and some additional parts. The original Sky Torpedo had a bit of bad luck. First, it got a nice zipper due to a too fast delay on an Estes D12-5. Estes sent out a replacement body tube. Before I could use the tube and make the rocket whole, it got treed and stayed up there for about a month. When it finally came down, I was able to salvage the motor mount, nose cone, shock cord, and the fins to pattern and used the body tube from Estes as a shorter replacement. 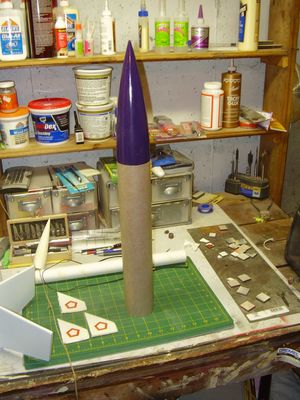 Modifications:
I had a very cool Dynastar Sky Torpedo that I treed right before I went on "vacation". After coming back a month later, I found it on the ground soaked to the centering rings. I was able to salvage the nose cone, the Kevlar® shock cord, the entire motor assembly, and I used the fins to make patterns.

The most significant modification was to the motor mount assembly. As it suffered from water damage while out in the field for so long, I had to reinforce the centering rings with card stock, balsa, and wood glue. Essentially I cut out eight extra rings out from a couple manila folders and glued them in succession to the existing centering rings. I then glued small strips of balsa across the rings to increase their rigidity. Two rings laminated to the top and bottom of both centering rings. 4 balsa strips glued to each ring. It worked very well and the rings were as good if not better than before.

It was not as hard as I thought to come up with a recycled design. To be quite honest I sort of bashed two designs together when trying to figure this one out. It took elements from the Sky Torpedo and some from the Dynastar Stonebreaker, mixed them up...added some interpretation and the Vidar is what I came out with. 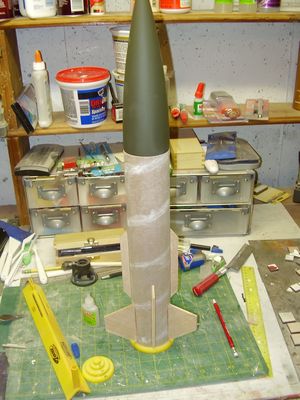 Finishing:
I had to do a lot of sanding on the nose cone to get it back to "normal". I ended up using OD paint for a military look and to really cover over some of the paint I couldn't get off that well.

Flight and Recovery:
I only got one flight out of this bird as it seemed that parts from this kit were doomed to fail.

Instead of wadding I used some Nomex® from an old fire blanket (another recycled part). With these large bodied rockets, some form of reusable material seems to make sense over cramming it full of dog barf or wadding.

The shock cord was the original long 300# Kevlar® cord that came with the original Sky Torpedo. An interesting thing I learned while building this kit and its predecessor, you don't need elastic in your shock cord.

The flight was great on an E9-4. It was a beautiful takeoff, nice straight flight, and perfect ejection. It simmed out to about 1350 feet and I would guess it did about that in real life. The downside was it drifted, and drifted pretty far and was lost. 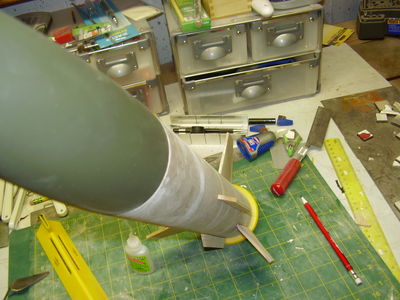 The funny story to this: My launch area is about 50 acres, and this rocket left the range due to some thermals off the mountains behind my house. I drove down the street visually tracking as I went until it dropped out of site. Making an estimated guess as to where it landed I stopped in front of a house only to see the owner come running around the front. I asked him if he saw my rocket land nearby and he Exclaimed, "Your bomb missile landed in my burn pile!" Evidently he thought it was some sort of heat seeking missile that landed in his illegal burn pile and was worried it was going to explode. By the time we got back around to the burn pile, the only thing left was a chute that I had salvaged from another destroyed rocket. Figuring that the chute was cursed, when I got it home I threw it out.