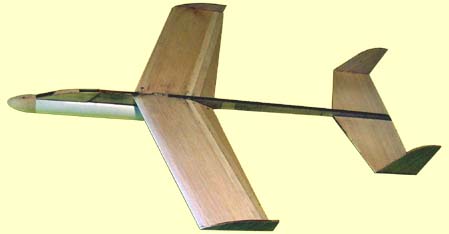 Standard boost glider configuration with R/C battery, receiver, and HiTec servo. The glider is balsa with a few hardwood components. Boost module is a long section of BT50, recovered on a 12 inch parachute. Both nose cones are turned balsa.

Wonderfully accurate laser cut balsa, tubes and hardwood parts from BMS. Assembly was very simple and straight forward. Nothing needed but a knife, sandpaper and white glue. The RC equipment supplied by BMS fit the model perfectly and performs beautifully. The equipment fairing is not as stiff as I would have liked. When I slid it over the RC gear, it 'mushed' out quite a bit and didn't fit snuggly on the fuselage. It still worked just fine.

I sanded the airfoils smooth and then sealed with sanding sealer (4 coats to fill some of the grain. I then foolishly attached some Japanese tissue to give the wings color. It made it difficult to get the balance point correct for the glide portion of the flight (had to add a small weight to the tail for balance).

Flight was wonderful, with a nice and high boost on the D12-3. Separation was clean and the glider flew level and slow. I was able to circle 4-5 times in nice, wide turns. I had enough time to try turning in both directions, too. The glider is very responsive to the RC control, and quickly returned to a steady, straight path when I released to control. I was able to bring it back to within about 30 feet.

Rob says the glide speed is slow, but I managed to hit the ground pretty hard. It sheared off the mounting balsa around the battery and receiver, but it will be easy to repair. It's really nice to be able to control the landing. It may be worth beefing up the hardware mounting holes a bit.

Very, very fun to build and fly. As Rob says on his web site, I can see the appeal of controlling the flight. I have to repair it and fly some more!

I've put 7 flights on my Arcie-II, and it's a blast. I agree with the original reviewer, the cutouts around the RX and battery slots should be sandwiched with some 1/64" ply doublers or a similar veneer. The grain here runs cross-wise and is susceptible to breaking on hard landings/crashes. I've had only one crash, due to a tangle with the shock cord. For best performance, my Arcie-II flys great with the CG just a tad (1/8") forward of the recommended setting. As heavy as it seems, it simply floats. A 90 second flight time is average (on a D12-3), but I've hooked into thermals a couple of times, once for 3:30 and once for a 4:10 flight! BTW, if you fly on an "E", put some protective tape over the center of the wing, over the tape hinges too. The E9-4 really toasts this area, otherwise. The D12-3 doesn't have this problem, at all. I've seen only one C11-3 flight, and I wouldn't recommend it. Ejection is way past apogee, and the boost is just not high enough to get more than a few seconds of glide time. One last piece of advice - check your lateral balance carefully! Some Arcie-ficionados have reported one wing being significantly heavier than the other, and since there is no dihedral, the Arcie-II is very sensitive to lateral imbalance conditions. The only drawback to the Arcie-II is that I'm almost out of D12-3's, and the local hobby stores are out now, too!