Brief:
In my early days of my rocketry odyssey, clustering was not a technique to which I gave much thought. This was largely due to the fact that, in 1977, the only commercially available Estes kits that featured clustered engines were the wildly expensive (to a kid who caddied for rocket money) Saturn V and Saturn 1B, or the Scrambler, (eggs were for schoolbuses, not rockets.) Until 2001, I had never even heard of the Astron Cobra or Astron Ranger, two poor man's cluster kits from the early days of Estes Industries (when clustering was the closest thing to high power.) The Cobra became my first choice for a clustered classic, mostly because of the Ranger's close resemblance to the Big Bertha. (I have the BMS cone for a Ranger project. I just wanted to start with something a little different.)

The nice thing about cloning the Astron Cobra is that aside from the clustered engine mount, the rocket is an extremely straightforward 4fnc project. This allows even the relative novice to produce a great looking clone. If you can cut balsa, glue fins on straight and have rudimentary finishing skills, the Cobra stands a good chance of being a rocket that you'll be proud to both fly and display. Constructing the engine mount is the only part of the project that can be slightly tricky (emphasis on slightly.) 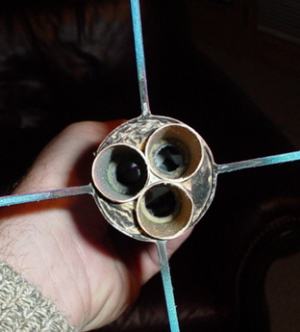 The cluster mount is constructed by gluing three equal lengths of BT-20 in a triangular shape. In this configuration they are a perfect fit inside a standard diameter BT-60 body tube. When the completed mount is installed in the rocket, there will be four spots which have to be sealed to guard against ejection gases escaping (and causing a cluster.......failure.) The first and easiest to deal with is the space that runs down the middle between the three tubes. I took care of this space by first gluing two of the tubes together, side by side. When these two were dry, I ran a heavy bead of glue down the middle of the two tubes, and before placing the third tube into place, I put a ten inch piece of Kevlar into the glue. This accomplishes two things. It effectively seals off this potential exhaust gas escape path, and the Kevlar helps to both strengthen and fireproof the recovery system. Works great, and best of all you don't have to worry about the old Estes tri-fold paper shock cord mount being blown out by the force of the triple ejection charge.

The three remaining potential gas escape spots occur at the spots where the outside of the engine tubes come into contact with the inside of the body tube wall. These can be taken care of in one of two ways, or both if you want an added measure of insurance. The first method involves placing a 2060 engine mount (like the one that comes in a stock Big Bertha kit) on top of the three engine tubes and gluing it securely in place. Once the glue dries, the portion of the mount that covers the tops of the engine tubes can be cut or filed away to keep the ejection passages cleared. (I didn't find out about this method until too late. Needless to say, this should be done before the structure is mounted in the engine tube.) The second method involves taking glue soaked wads of Estes recovery wadding and filling the spaces until a leak-free seal is achieved. This method also has the added advantage of strengthening the whole engine mount area. The disadvantage of this method is the mess involved. Glue soaked recovery wadding is best handled in small clumps as it tends to shred when wet and it gets all over EVERYTHING! While both of these methods done correctly will provide you with a leak proof seal, using both of them together almost guarantees that the ejection charges go upward as intended without potentially disastrous leaks. I used an earlier version of the Cobra plans for the build, but a later plan includes instructions on using engine hooks. It's a relatively simple modification, but I've had no problems with friction fitting early clones, and I prefer to keep them as close to the original on the outside as possible. 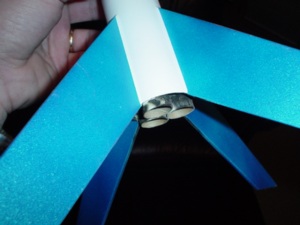 Finishing:
The Astron Cobra was produced from 1963 to 1973, and as an early Estes kit it did not have a strongly defined paint and decal scheme over it's lifetime. Early catalogs showed it brightly painted in a hot pink/white/black scheme with somewhat generic military markings, while the 1971-73 catalogs showed it as a mostly white rocket with blue fins and nose cone. This version was also given a minimal decal treatment with only a red, vertical UNITED STATES and a small black roll pattern decal to distinguish it. I went with the later version, using the SPEV decal scan on JimZ's page for the UNITED STATES and the old Astron Sprint scan for the black roll decal. I printed these out of Bel Decal paper and they came out looking great. 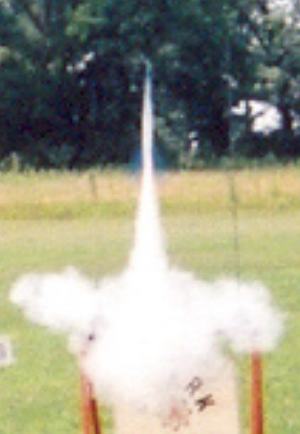 Flight:
The Cobra has only flown once to date, at a club launch last summer before my personal rocketry drought began. It was an impressive flight, as clusters generally are, with plenty of smoke and noise from the trio of C6-5's. With it's oversized fins the Cobra arced into the breeze somewhat, but these fins were also undoubtedly responsible for the unwavering stability of the flight.

Recovery:
Recovery took place several hundred feet downrange with no flight damage, but plenty of scorching around the engine mounts. (This looks cool though.) The parachute also got slightly toasted, due to the undoubtedly hefty ejection charge of the C6-5's. Next time I'll go a bit heavier on the dog barf wadding, and if I build another it will probably be equipped with one of the available pieces of perma wadding.