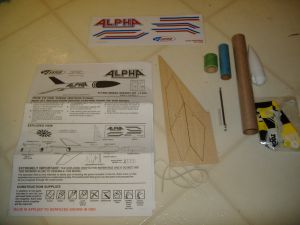 Brief:
The old Estes standard: The Alpha. For many of us rocketeers, it was one of our very first rockets. It was my second, after a very old E2X kit. I command a small model rocketry club in my AFJROTC corps, and this is the rocket that I hand out to all of the newcomers. Frankly, after seeing fifteen or twenty basically identical Alphas, I got a little sick of them and simply wanted something different, something to inspire new rocketeers or give them something unique to show off. After a few iterations on RockSim, this is what I came up with. The only requirements I came up with for myself and the incoming cadets who wanted to try a kit bash were: 1) They cannot use anything that wasn't in the kit, and 2) The rocket couldn't use excessive nose weight (The stability margin calculated with an Estes C6 motor loaded before nose weight must be greater than 0).

I made some very easy modifications to this rocket that give it a truly non-kit look. The two modifications were: 1)The fins were sliced in two and made into two separate sets, and 2)The motor mount was moved out the back and smoothed with a paper transition.

Modifications:
Experienced rocketeers beware: these instructions were written with the novice rocketeer in mind.

Always as a first step, lay everything out and check to make sure you have everything. I used this as a way to see what I had to kit bash as well. After this, follow only the shock cord mount assembly and tube marking steps on the first page, then set it aside for later. 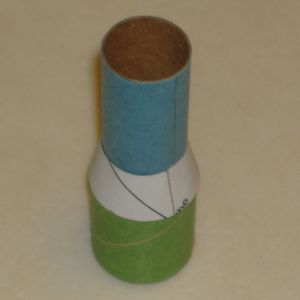 Next cut out all of the fins from the form. Be careful not to snap anything as the extra wood will come in handy later. Sand down the little nubs left from the laser cutting (or just set them aside if you have a older die-cut set). Next, mark the fins for cutting by drawing a line from the root-trailing corner to the tip-leading corner of the fin. Then cut along this line to form two sets of swept delta fins, one with a 1.25" root and 1.75" sweep, and one with a 2.25" root and 2.75" sweep. Both sets of fins will be used swept rearward. Sand the sets even and round the leading edges of the fins. I decided to leave the trailing edges square to maintain the crisp shape of the fins.

Here is the only step that uses some non-standard equipment. If you don't have it, download the Template Widget from the "Tools and Calcs" section of the EMRR site. Then, using the Transition Template tab, create a transition with the following dimensions: Diam. #1=0.976", Diam. #2=0.736", Length=0.5". Because I didn't want to use outside materials, I inserted the first page of directions into my printer and printed the transition on that. Cut out the transition with a small tab on one end. Then carefully connect the ends to form the shroud, making sure not to put any creases in the paper. 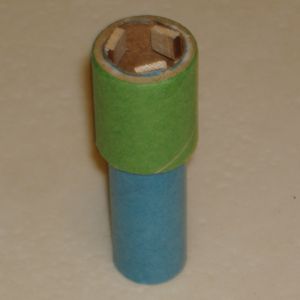 Now comes the fun part, final assembly. Apply a 7/8" ring of glue to the inside of the one end of the body tube and to about a very thin 1/16" long ring of glue on the outside of the same end. Push the motor mount/shroud assembly into the tube until shroud overlaps the end of the tube. Using the back of your fingernail, gently work the edge of the shroud into the glue. Once this is completed set the model aside and let the glue cure. 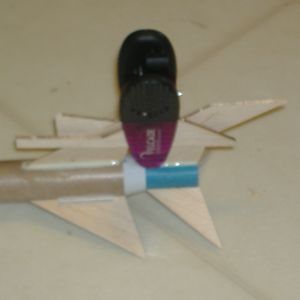 Once the glue has dried, follow the procedures in the second page of instructions for affixing the larger set of fins to the model. They should be flush with the end of the transition and swept rearward. The smaller set of fins will be affixed to the blue motor mount tube. The fin root should be the same length as the length of the motor tube protruding from the transition. To make sure the two fin sets line up, you will need a small clip of some sort. I used a potato chip bag clip, but a binder clip or something similar will work too. Again, find the leftover balsa from the fins and break off two strips about 3" long. Apply glue per instructions, but use the two balsa strips and the clip to hold the fin in place on the lower tube. Be patient with the step! This is crucial to making sure the rocket comes out looking good! Repeat this for the other two smaller fins.

As a final minor modification, I would suggest tucking the launch lug into the corner of one of the upper fin joints, but it isn't necessary. It can also be applied per the instructions.

As a final step, mark a line 2.75" from the base of the nose cone. Add nose weight until the CG is at or ahead of this point to get the proper stability margin. This will allow the rocket to use all of the motors recommended for the Alpha.

Congratulations! You are finished with all of the major modifications! Follow the instructions to install shock cord, parachute, and nose cone, and voilà! You're done! Add some paint, and you've got yourself a good looking model!

Finishing:
Finishing is fairly straightforward as with any small rocket. The only problem I encountered is that the transition can cause problems with finishing; I suggest using some Elmer's Fill 'n' Finish to even out the transitions between the tubes and the shroud. Also, don't sand the shroud too much because if you sand the paper, it becomes frizzy and impossible to get a smooth paint job on.

Also, the two sets of fins make finishing a little more difficult than normal, but not much.

I painted my first one a dark blue, but this rocket leaves the stage wide open for a shark paint scheme. 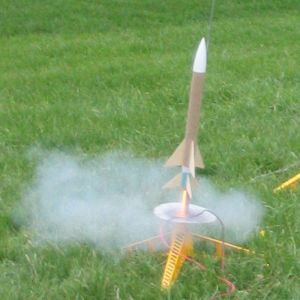 Flight:
The Great White can use all of the motors recommended for the Alpha. A8-3s will give an altitude of about 300', B6s will give 600', and C6s will give about 1200'. The Great White is incredibly stable even with the large forward fins. It's first flight on an A8-3 was fairly nice although the high winds caused it to weathercock like crazy. This rocket's true match, however, is the Estes B6. The B6 gives a nice straight boost in even gusty conditions and gets the rocket to an impressive altitude. C6s take it even higher, but if you want it back, use a B6.

The next two flights were on calm days and were straight up boosts and nice recovery, landing not far from the pad. The Great White is a great flier and flies great in low to medium wind conditions.

Recovery:
I swapped the parachute with a 1.75" x 36" bright red crepe paper streamer for the first flight because the Great White's first launch was on a gusty day. I was always of the opinion that Alphas should come with streamers not parachutes anyway. A streamer is a perfect match for the rocket. I suggest making this change unless you like walking to find your rocket.

The only problem with streamer recovery on this rocket is the somewhat fragile lower fins. I've only lost a fin once when it hit a power line, but the streamer lands the rocket a little hard so watch the fins for cracks or stress points. This problem could probably be somewhat alleviated with a slightly wider streamer.