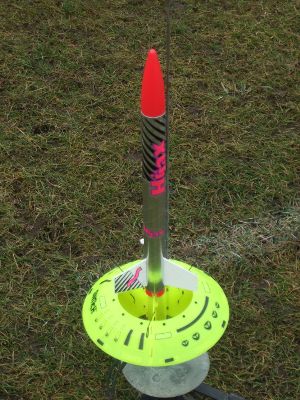 Brief:
A kit bash between two Estes kits: A RTF Snitch and a Hijax kit. The Snitch will be the booster and the Hijax, the sustainer.

Modifications:
Booster build: The snitch makes an excellent booster, very stable, and will recover well. To adapt it to a booster, the top "engine block" part of the snitch was removed with pliers and then sanded down. This will allow the motor from the sustainer to be taped to the booster.

To connect the sustainer and booster sections together, the coupler from the Hijax kit was altered. Top and bottom were cut off and then three small sections were removed from one side so that the coupler could be securely fixed to the top of the snitch. The whole section was covered with glue and left to dry.

Sustainer build: The sustainer was built nearly stock. The plastic mount was altered; the rear part was cut away so that the coupler from the snitch would sit smoothly into the base of the sustainer. The engine hook was left out. The mount was then glued into the body tube and the fins were glued into place--they are through the wall type. 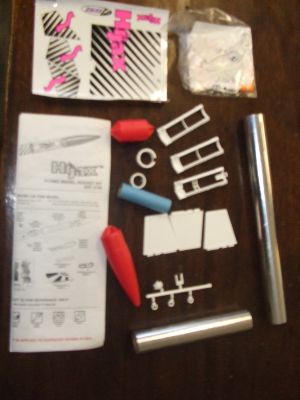 With the coupler already used, the second body tube was discarded.

Construction:
The kits consists of: 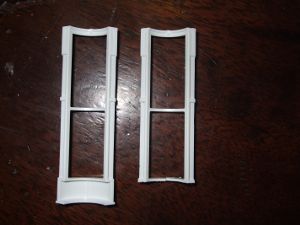 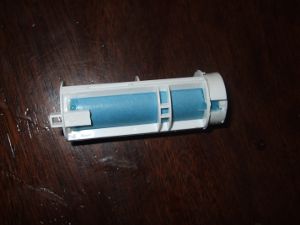 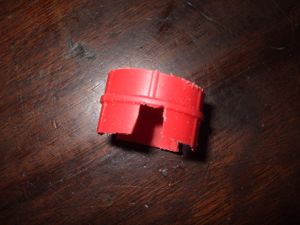 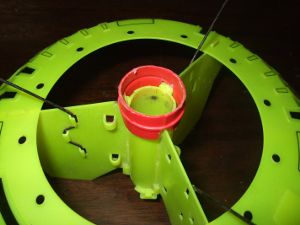 Flight and Recovery:
First flight was on a B6-0 booster and an A8-5 sustainer. As expected, a stable straight boost with a clean separation at a low altitude. The sustainer went reasonable high on the A with the ejection being just after apogee. The 12in parachute gave a slow recovery. A streamer would be more appropriate.

Second flight was with a C booster and a B6-6 in the sustainer, much higher with a long walk for me.

Third flight was with C6s for both motors. This time the booster stayed with the sustainer, the rocket continued to rise, and then turned and was on the ground by the time the nosecone popped. The snitch motor mount was well and truly burnt out.

I'll cut out the remains of the Snitch's mount and replace it with a body tube.

Summary:
Apart from my mistakes, it's not a bad kit bash with a good chance of getting both bits back undamaged.