Editor's Note: This review does not consider the helicopter portion of the rocket.

Brief:
This is one of the new ones from Estes. This kit seemed to to yelling "STREAMER" to me. The plastic forward swept fins are strong, and just seem perfect for streamer recovery. So, I took the helicopter parts and put them away for a later day. This reduced the weight, so now my Cosmic Cobra is only 2.4 oz completed.

This took about 10 minutes. The two piece plastic fin unit made it super simple to tie a knot in the end of a two foot piece of 1/8" Kevlar® cord, and using CA as I did on the whole rocket, I glued the cord in between the two halves of the fin unit. Attached a small snap swivel to the end of that, then added the 24" x 1/8 shock cord, and selected a silver mylar 2" x 56" streamer. The launch lug is unlike any I have ever seen before. It form fits onto the shape of the body tube.

Finishing:
Since you don't see many black "stock" nose cones, at first glance this rocket looks like it was painted. The gloss yellow body looks great with the black nose and fins. I left it that simple and did not use the wild looking purple decals. I think it looks cool just like it is. I have never felt good about the Estes method of attaching the shock cord with a paper mount inside the body tube. Those eventually come loose and in many cases they cause the parachute to get stuck. So to improve this kit, it should come with a 1-2 foot 1/8" Kevlar® cord which is super simple to attach to the motor mount/fin unit with this kit. I was surprised the shock cord that came with it was 2 feet long as I expected one only 1 foot long. Still, I feel it should be at least 4 feet long. The gloss yellow body tube feels very strong.

Flight:
I plan on flying it every time I go out for a launch day and I will experiment with different types of streamers. I will bet I can get at least 50 flights out of it with no damage, in fact it would be interesting to try an Aerotech D21 in it. I am sure it would hold up. My first flight was with a Quest C6-5. Took a few seconds to light and then shot straight up and out of sight. I thought I had lost it until I saw the red puff and silver streamer. I had put a few dashes of red line chalk in on top of the wadding and that really helped to see where it was. It came down about 500 feet from here and seemed to drift quite a bit for a streamer.

The second and third (final flight) were at a larger field and I switched out the streamer for a parachute for the second flight with a C6-5. The last (3rd) flight when I lost it had the streamer back in it, and I believe I either put too much line chalk in it, or the D21-7 was too much power as it cocked sideways quite a bit and went out of sight in just seconds. I saw a huge cloud of red line chalk and that was it. So much for getting 50 flights out of it!

Recovery:
Was recovered in perfect condition.

Summary:
The only streamer kit I ever flew before was an Astron Sprint back in the early 80's. Back then I had imagined a rocket with forward swept and strong plastic fins, as my Sprint always seemed to pop a fin on landing. I had bought this Cosmic Cobra because I was curious about how the helicopter nose cone worked, but upon looking at the parts, I quickly realized that this is a perfect kit for the streamer testing I wanted to try. I may add the 'copter blades to the nose cone just to try it, but that adds almost 30% more weight to the rocket. Since I used snap swivels, the recover system can be changed out in just seconds. 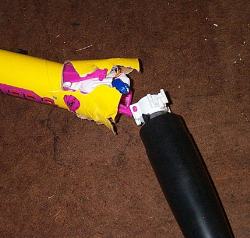