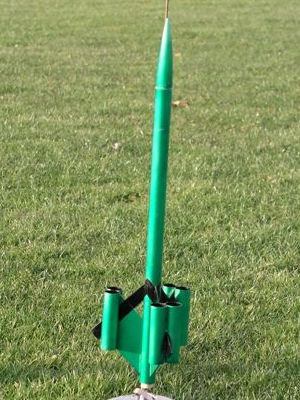 Brief:
This is the Estes Super Neon that I modified to become the Klingon Star Dart. I added 3 fins and moved the tube fins out to the ends of these new fins.

I glued the tubes together in pairs (I always liked the dual engine look of the B-52).

Then I had to figure out what to do with the 6 small fins supplied with the kit. I decided to glue one from each fin to the body tube, and then the other fins inline on the outboard of the tube fins. 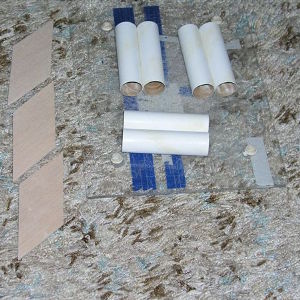 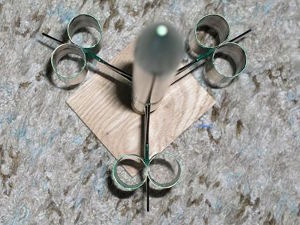 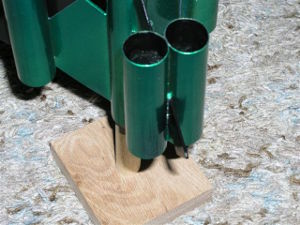 Finishing:
I sealed the balsa and primed the rocket. I first sprayed the rocket gold, then covered with a light coating of green metal flake. I made the original fins black with a stripe continuing onto the body tube. The kit decals did not fit with my paint scheme so I did not use them. I did a final coat with Future Polish.

Flight and Recovery:
I used "dog barf" for wadding and installed a 12" chute. The engine has a standard Estes motor mount. The Super Neon recommends the A8-3, B4-4, B6-4, and C6-5. For my first flight I tried the A8-3. There was a voice in the back of my head that was telling me this was a mistake--and it was right! The rocket went straight up but did not go that high. It tipped over and headed down. Just before hitting the ground (about 5' up), the ejection charge went off getting the nose cone and chute out of the way so the body tube took the full impact. However, I think the ejection did slow the rocket down and the ground was soft. It dug in over an inch and I had to dig the dirt out of the tube. Only a little bit of the edge was damaged. I straightened it out and kept flying. 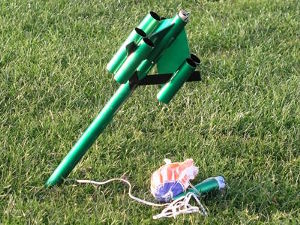 The next flight was on a B6-4. Again, a nice straight flight. The rocket went up higher. Ejection was 1~2 sections after apogee and returned to a nice safe landing.

Third flight was on a C6-5. Again, straight and higher. The wind caught it so I had a hike to get it back. While it was coming down, I had a bit of panic. It landed only 5ft from the tree line (and these trees were tall!)

Summary:
The Super Neon is a nice kit, but I like the looks of the Klingon Star Dart better. I would not use either the A8-3 or B4-4. The extra weight and drag just won't get it high enough.

I too could not resist the temptation to modify this gem of a rocket in a similar manner. I swapped out the fins completly and opted for ones based on Apogee's Diamondback design and mounted the dual tubes to them. I call mine the Neon Viper and fly it only on B or C motors as well. Would love to try an 18mm composite D10 in it someday at a club launch as the local park field I use is not big enough and I don't want to lose this one. 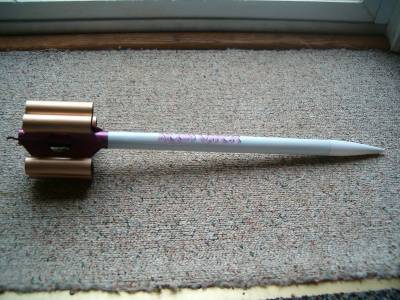 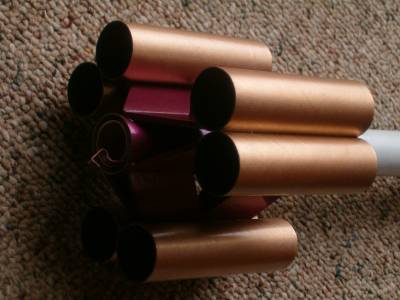