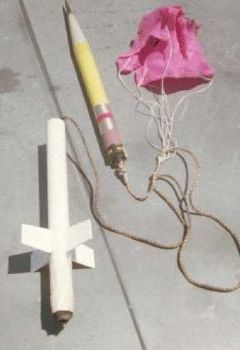 Brief:
I cut up an Estes No. 2 Sky Writer and used the components to build a altitude-seeking model with an altimeter bay. PencilPushr was built specifically for the NARTREK Advanced task of achieving at least one-half of the Class "C" NAR altitude record for E-motors of 1128 meters set by James Bosler on 6/26/04. So the goal was 564 meters or more (1861 feet). This was not that hard to do, but you do need to carry an altimeter aboard a light, smallish rocket--and you don't want to lose your $70 instrument.

Modifications:
I have used the plastic fincan of the Estes 2-stage Mongoose for a number of scratch building projects. I wish they sold it separately. The Sky Writer is basically a shortened Mongoose sustainer stage with the nifty and eye-catching "No. 2 Pencil" paint job. I cut the "pencil" down to 7" total length and plugged the "eraser" end with the sawed aft end of a 24mm AeroTech motor case to create a bulkhead. I epoxied a small eye-bolt from a picture-hanging set to hold the recovery system shock cord into the nozzle. A 4" length of 25mm motor tube was butt-glued to the aft end of the plastic fin can. Strips of glass cloth glued between each fin were used with epoxy to reinforce the joint. The entire motor tube was then wrapped with a layer of thin glass cloth to firmly glass in place the motor tube, creating a strong, lightweight structure. A 5" length of 25mm motor tube was then glued to the forward end of the fincan to complete the airframe. The recovery system shock cord, 4' of para cord, was passed through a small hole in the body tube midpoint, anchored with a knot which was covered with a sawed half of a BIC pen cap. A 12" TopFlite X-chute was used for recovery. Rocket was left unpainted, except for the "No. 2 Pencil" payload bay and nose cone. 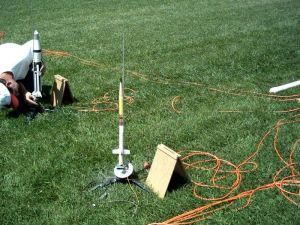 Construction:
I selected the Estes Sky Writer because it was inexpensive, and my calculations showed that a 25mm diameter airframe with space for a Perfectflite MicroAlt would be necessary to achieve the goal. I cut up the kit parts so I could utilize the unique "pencil" body as the payload compartment and the plastic fin can as a simple, strong way of holding the fins on at the speeds involved. The motor to be used was the AT E15-7. The "empty" weight of the rocket of 88 grams (3.1 oz.) includes a Perfectflite MicroAlt in the payload bay with a bit of bubblewrap under it.

The Estes components were first rate. I never use their plastic chutes and underpants elastic shock cord though. I prefer higher quality substitutes. 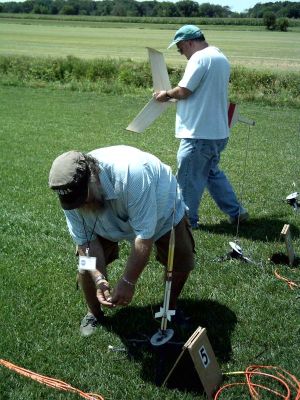 Flight:
Test flights with Estes C11-5 and D12-7 gave climbs of 404' and 952', respectively. Motors were friction fit with masking tape with the protruding 1/2" of the motor taped to the exterior of the motor tube with a couple wraps of masking tape. Bottom 1/2" of the motors were wrapped with masking tape as a motor stop. These test flights indicated that under ideal conditions, I should be able to just barely achieve my goal of at least 1862' with an E-motor. Simulation was based on an AT E15-7. I was worried about losing the thing and my $70 altimiter with it, so I waited until I had an opportunity to fly with my brothers up at the MASA launch site in central Minnesota, which is held on a huge sod farm. On the first try with perfect calm, the E15-7 lit and blasted out of sight perfectly straight up. We lost track of it, but fortunately, a couple of kids spotted PencilPushr landing on the huge expanse of close-cut sod and directed us to it. MicroAlt was peeping out "1-9-2-8". Yippee, goal achieved! Later that afternoon, I flew a LOC Legacy on a G80-10 to 1920' to exceed 1/2 of the NAR record for a G-motor flight (3722', by F. Hunt on 9-21-96). However, the rest of the NARTREK Advanced-Competition task has proven much harder, and I'm still plugging away at it.

CONs: Hard to see and track at nearly 2000'. I expect the E-altitude record will be broken in the not-to-distant future, and PencilPushr may not be as useful for the NARTREK Advanced task if the new record is more than 4000'.

No reason to go to the fuss of building PencilPushr unless you want to carry an altimeter.