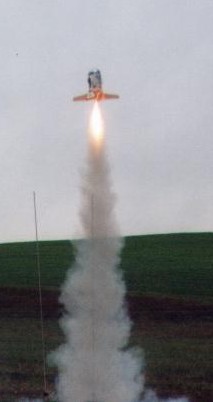 Brief:
This started as the Estes Fifteenth Anniversary R2D2 . Which was designed to fly off a C6-3. I have modified it to fly off 29mm motors because R2D2 just begged for more power to fly .

Modifications:
First step was making the fins bigger, I used the original plastic fins for the pattern, however I made them 2" longer with the 1/8" plywood. When I first did this I just glued the plywood fins to the plastic fins. This didn't work out to well . After 2 flights the plastic broke. I made another set of plywood fins still 2" longer. This time I used 8/32 screws and screwed them to the legs. So far this has been ok.

Next step was making the centering rings. I used the original as a pattern just making the center hole to fit the 29mm motor tube. For this I just used 1/8" solid cardboard because I wanted to keep the weight down.

For added weight in the head I originally used 4 pennies along with the weights that had come with the kit. This worked well and R2D2 weighed in at 8 oz. until the shock cord got caught on a wire and pulled the disk out that was holding the weight in. I used Devcon Plastic Welder mixed right in the head.  I added lead shot and glued the shock cord right in with the mix. His head now weighs approximately 5.6 oz. For a total overall weight of approximately 10 oz.

Construction:
The following parts are what I used from the original Kit.

The following are the parts I used to make the changes to use 29mm motors.

This built and finished easily enough even though I have made some changes after flying a few times to make things even better. I used Titebond II to glue the centering rings and motor mount to the body.

I originally used plastic cement to glue the legs to the body, this worked for 2 flight. On the 3 rd flight the glue let loose on the leg causing a fin to shred. After this I then used 8/32 bolts to screw the legs right to the body. Now the side of the body would have to rip out for them to come off.

Flight:
The shock cord is only a piece of Kevlar threading 2.5' long. I have used 12", 18" and 24" parachutes in this just depended on how the wind was on the days I flew it.

Now for the flights since the mods I made I have only flown this on 29mm motors even though I had planned on flying this with a 24 mm adapter. Just don't see that happening now. According to RocSim I am getting about 2000' out of a rocket that was original designed for 200'

Flight 3 - G35-4 This started out as a good flight ,then the one leg pulled away from the body tube, After this I then bolted the legs to the body tube.

Flight 4 - G35-4 This time everything worked great ,however the shock cord got caught on a wire ripping the disk out of the head holding the weights in. It was after this that I used the Plastic Welder and lead shot for the weight

Flight 5 - G64-4 This took off nice and straight and according to RocSim should of hit approximately. 2000'. Chute got tangled and screws pulled plastic legs where fins where attached ,I fixed this by adding washers to the screws which I should have done to begin with.

Flight 6 - G64-4 Another nice nice again to about 2000' Again the chute got tangled on me ,However no damage to the rocket.

The picture was taken at the Oct. NEPRA launch by Bob Theobold. It is taking off on a G64-4