Brief:
This is a kitbash I did for the 2006 EMRR Challenge. I had never tried anything like this before and it was exciting to do. I altered the DC Gemini to fly as a parallel staged rocket. The Parachute compartments were changed into boosters and hold 18mm motors as does the central core. This was a great challenge and makes you be creative.

Modifications:
The directions were followed to construct the motor mount and sand the fins, but my first change was made before the motor mount was inserted. Since the main body tube and the boosters are separate in my design, the vent holes in the tubes need to be plugged. To do this in the main body tube, I cut a strip from the NAR safety code which was in the bag and rolled it up until it was the inside diameter of the BT-50 tube. I then glued the ends of this strip to hold that shape. Once it was dry, I smeared wood glue inside the tube at the same area as the two vent holes. I then pushed my paper coupler I made up into the tube until it covered the holes. After that dried I then inserted the motor mount as specified in the directions.

The holes in the sides of the boosters were plugged in a different manner. The vent tube was cut into fourths and two of these were placed on a section of the instructions and filled with glue. What was left of the NAR safety code was placed on top. These were allowed to dry and then the paper was cut in a circle around the tubes. These were glued in place in the holes and then sanded down flush with the body tubes. 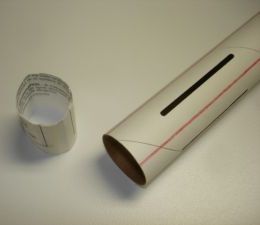 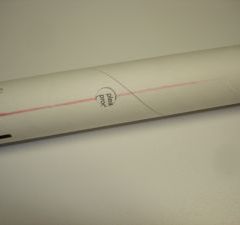 Also the nose cones for the boosters cannot be glued in place since they will need to come off. Therefore, one of the 18" shock cords was cut in half and each booster got one half of it. I cut out shock cord mounts from the instructions and attached the shock cord to the booster tube and to the nose cones using shock cord mounts. For the nose cones I used 5 min epoxy since they are plastic and the wood glue won't stick. I then cut out streamers from the instruction sheet and accordion style folded them and glued them with a loop around the shock cords. I also needed motor blocks in the boosters since they will be carrying motors. To accomplish this, I used some scrap balsa wood from the fin sheet and made two small Xs in them. I then sanded the ends until they were rounded and would fit inside the tubes. I then used a spent engine casing to slide them up into the tubes until about 1/4" of the engine stuck out. 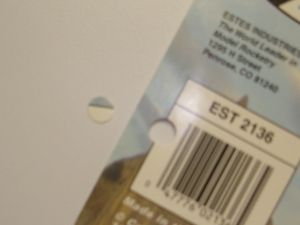 Also the main tube could not be permanently attached to the nose cone either, so I made another shock cord mount from the instruction sheet and attached a shock cord from the body to the eyelet on the nose cone. I also tied one of the parachutes which came with the kit to this nose cone as well. To be sure that the holes in the side of the tube would not blow out during the ejection charge, I punched two holes out of the cardboard picture which came with the rocket. I put some glue in the holes which were covered with the NAR safety code and then placed the punched out cardboard circles over them. This made the tube much sturdier at these points.

The final modification I made was to use hooks to hold on the boosters during flight. To make these I just used the scrap balsa wood from the fin sheet and whittled out two small hooks which were glued onto the boosters. I then cut six small pieces of the wood and made two U-shaped blocks which I glued onto the main body tube. The hooks on the boosters fit snuggly into these U-shaped blocks so they would stay on the main tube while still falling away during flight.

Construction:
Since this was a kitbash all of the parts were those from the Estes DC Gemini kit. I used most of them. They were as follows:

All of these parts were in perfect condition when it arrived. I listed some things that are not on the parts list in the instructions because this is a kitbash and parts are used which usually aren't.

This kit has three body tubes, one BT-50 tube which will be the main body tube, and two BT-20 tubes which I will use as the boosters. It also has 4 through the wall fins which I like. The motor mounts in the main tube is slightly longer than the motor hook and the boosters are minimum diameter.

Finishing:
I only painted the main body white and the boosters red. Since this was my own creation and not a DC Gemini, I decided not to use the included decals. This made it quicker and easier, and it still looked very nice sitting on the pad.

Flight:
For the first flight of this rocket, I flew it on two A8-3s in the boosters and a B4-4 in the main tube. I think that any motor combination would be fine as long as the booster engines are high trust and low burn time, while a low thrust and longer burn time engine is in the main body tube.

This rocket was prepped just like prepping three separate rockets. The ignitors were placed in the motors and wadding was placed in all three tubes. The engine hook served as the motor retention system for the main motor, while the two boosters required a good friction fitting. This was done with a piece of masking tape wrapped around them in the middle.

Upon ignition all three motors lit and it soared off the pad. It flew up very straight and the boosters both fell away as soon as they burned out. The booster streamers came out and they were both recovered very close to the pad. The main tube however got caught by the wind and drifted over the school where we were launching at. It ended up on the roof. I think there is something between me and parallel staged rockets. This is twice now that I've built one and after the flight been left with only two booster pods. Well, I guess that means I'll just have to build another one.

Recovery:
The recovery system could have been a bit better had the boosters had small parachutes as well instead of streamers, but that didn't hurt anything. Some of the modifications I made can be tricky and a lot of thought and time needs to go into them to be sure that nothing is messed up.

The recovery system worked very well. Well enough in fact that the school building caught the rocket instead of me. There was some slight burning on the sides of the boosters which faced the main tube, but this is to be expected with three engines burning very close. The streamers deployed perfectly and the speed of the boosters was not too fast, however, you just need to keep an eye open with three parts falling at once.

Summary:
I really enjoyed this rocket since it was my first kitbash and I found that to be a challenge. I also enjoy clustered and parallel staged rockets so this fell into that category as well. It was a challenging build, but once it flew it was well worth it.

The PROs were that this was a kitbash and a parallel staged rocket. This allowed me to be able to design it and feel that I had a bigger part in it than just putting a kit together. Also it looked very nice during flight.

The main CON that I had was the fact that I lost it on the first flight. Maybe I'll take a ladder up to that school next week, we'll see.