Back in 1977, one of the Christmas gifts that I most looked forward to opening was the Science Fair SFX-4000 Aeronautical Lab Kit from Radio Shack.  I'd been flying for all of six months at the time and the idea of digging deeper into the science of aeronautics was oddly appealing to a kid who dreaded the idea of a science fair when he was in grade school.  Understandably the rockets were the stars of the show in my estimation, but the fact that it also came with a balsa airplane that could be built to fly also intrigued me.  What I got was a bit less than what I was accustomed to.  I'd been building nothing but Estes kits to that point in time, and the instructions for the rocket in the kit were sparse compared to Estes more detailed instructions.  I was also puzzled by the decals, which seemed to me to need to be applied before the fins were attached, and in leiu of paint.  In the end, construction lagged, and I never finished the rocket to the level that I wanted to.  And it never got flown.  Fast forward, more or less, to 2013.  I found another Aeronautical Lab kit on Ebay that had the parts I needed to redeem myself and the rocket, which I christened, quite logically, the Logix Explorer.

Being that the 2013 kit was incomplete, I had to scramble a bit during construction.  The first problem turned out to be with the brittle plastic of the 40 year old nose cone.  It pretty much crumbled to the touch along the bottom edge of the cone in one spot.  I didn't lose any of the pieces, and they were all of sufficient size to piece back together, which I did with the help of gel CA.  The fix wasn't perfect.  The builder didn't care.

Missing parts in the set were the nose cone base, engine block and a launch lug.  I had an actual engine block that I'd bought in bulk from Semroc that fit perfectly in the body tube and inside the nose cone.  One of the blocks became the nose cone base.  I dabbed some epoxy into the nose cone and wedged the block in, then filled the center hole with scrap balsa, which was also epoxied in place, along with a small screw eye.  The result wasn't pretty, but it was functional.  I tied a length of Kevlar to the other centering ring, then put white glue inside the rear of the body tube and used an expended 18mm motor casing to slide it in to the appropriate depth, making sure to pull it out before the glue could catch.  I was well on my way.

Fins were printed on one of the balsa sheets that also had parts for the balsa airplane.  They looked like they had a strange tab at the top of the fin where it attached to the body tube, but the minimal illustrations in the instructions didn't show a tab in that place, so I just went with the actual tracing.  The fins were sanded together to match, then glued and filleted in place using Elmer's Carpenter's Wood Glue.  When the fins were dry, the only remaining step was to tie a piece of 1/8" sewing elastic to the end of the Kevlar and attach it to the screw eye with a snap swivel.  For better or worse, the Explorer was flightworthy.

The body tubes for this rocket were pretty primitive, and when construction was done the whole rocket was sprayed with a coat of Valspar primer, then slathered with a thick coating of Elmer's Carpenter's Wood Filler.  It took an additional coat of primer and another slopping of CWF to get the tubes looking "rocket-like" and ready for paint and decals.  With little to actually go on other than artist's renderings, I decided to go with a gloss white body, metallic red nose cone and Midnight Black Metallic fins.  The 40 year old adhesive on the sticker decals felt a bit lazy, and the lower roll patterns were indeed meant to be applied before the fins, so in the end I decided to scan the stickers and print them out on inkjet decal paper.  The end result isn't perfect, but distinct and flyable, which is all I was really after.

Thirty six years after receiving the Aeronautical kit for Christmas, I finally managed to fly the rocket that I'd been so pumped about.  The flight didn't turn out quite like I'd hoped, but it ended up okay.  First flight would fittingly be at B6-4 Field, which, had all things gone as planned, would have been where I flew it in 1978, and three days past Christmas, which also coincides with when I might have flown it in 1978.  The initial flight would be on an A8-3, which on a minimum diameter rocket is more than enough.  (Although 16 year old me might have thought the field was big enough to try a C6-5.  It wasn't, and isn't.)  The flight topped out around 300', more than enough for a field the size of B6-4 Field.  The ejection charge happened just before it tipped over, but the engine fired out the back and failed to completely deploy the streamer.  The whole mess plummeted back to the field and core-sampled, but other than some dirt in the end of the tube, there was no damage.

Almost eight years passed before flight #2, which coincides with the amount of time it took to decide on a paint and decal scheme.  It would fly at a WSR launch in Dayton and would happen on a day when I flew a bunch of rockets on B6-6 motors, and the Explorer would be one of them.  The flight was dead straight throughout the boost, then began drifting away from the pads, eventually landing on the soccer fields behind us.  The flight approached 800' and, as can be imagined, was just a dot in the sky at that point.  I can't imagine how high a C6-5 would take it, and chances are I won't.

Pros: Obscurity.  Chances are good that if you have one you won't see another at a launch.

Cons: As model rockets go, it's very primitive, very much like a homemade bird.  Sticker decals. 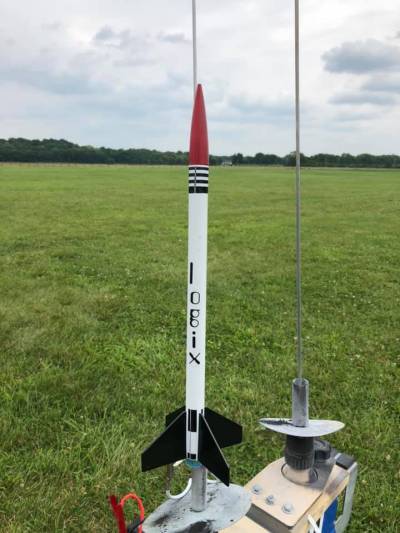 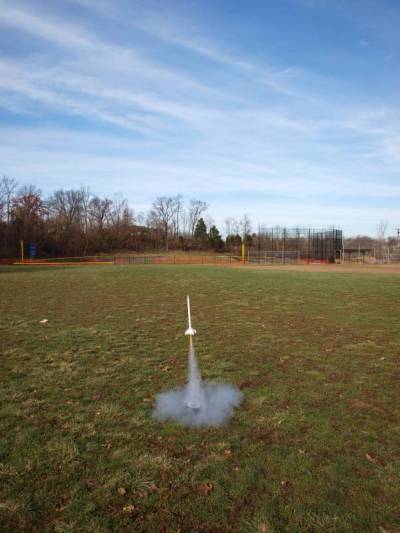 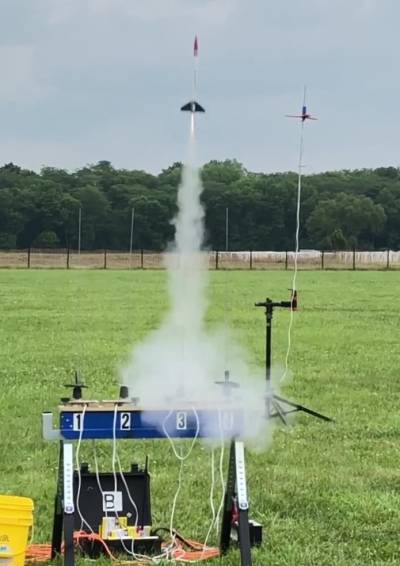 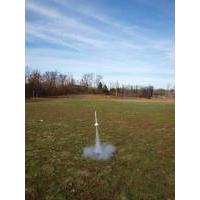 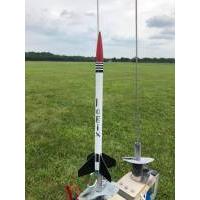 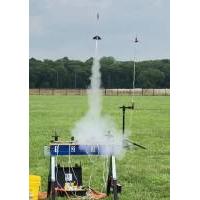