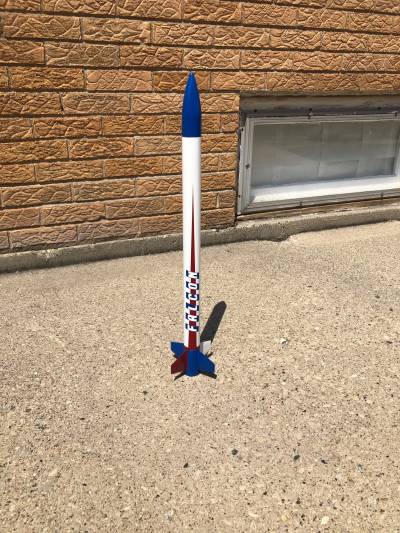 Owned a couple of these kits when I was a kid and loved flying them. The Falcon was always our first flight "test" rocket.  We would put it up on a B6-4 to test winds and get us flying for the day. I can't begin to count the number of flights but we put that rocket through everything we could think of. When I saw one pop up for sale a couple of months back I had to have it. Interestingly I was the only offer and the seller sold it cheap. Shortly after that I found a second one and of course, bought that one as well so I have one built in primer and another hanging on the wall waiting for another day.

The kit is very simple and straight forward. You don't even need to glance at the instructions.  Basically you get a molded plastic fin unit, body tube, Nose cone, two plastic rings for a motor mount, motor mount tube, Launch Lug, motor hook, plastic hook retainer, Shock cord and a basic plastic parachute with lines. With the exception of the motor hook, and motor mount tube, the components are good quality. I even used the stock parachute but cut a 5 inch spill hole in it. One thing to note is the nose cone has some pretty significant parting lines. If you don't plan to paint yours then you might be disappointed. I filled mine with spot putty as I'm planning to paint it.

If you make no changes to the build, There is no reason that this rocket couldn't be built and ready to fly in an hour. Even with my changes, I don't think I had more than 90 mins of actual build time in it.

The built starts with the motor mounts.  I made some changes here.  First I decided not to use a motor clip. I like my rockets to stand on their own. If the motor clip extends past the bottom of the fins I leave it out and friction fit the motor at launch.

The stock Yellow motor tube is very thin and soft but it is the correct diameter for the plastic motor rings supplied so I used it. Once the plastic ring locations were marked, I wrapped the exposed part of the yellow motor tube with a scrap piece of BT50 I had laying around. The piece of BT50 was scored down it's length and trimmed so that it fit correctly around the yellow motor mount tube and glued in place. Next I glued a spare thrust ring into the top of the motor tube to keep the motor in place.

At this point I decided that I wanted a secure place to mount my Kevlar line. I used a BT20/BT50 centering ring that was sanded slightly to fit around the motor tube about half way down. I then used #200 Kevlar line and tied it around the motor tube just below the centering ring and glued it in place with Thick and Quick. Final step in building the motor mount was attaching the top plastic ring of the motor mount. A small notch was cut in the upper ring to allow for the Kevlar line to pass through. It's worth noting that the plastic rings were both sanded inside and out before being glued into place using thick CA.

Next step was inserting the completed motor mount into the plastic fin unit. The fit was perfect but I did LIGHTLY sand the inside of the fin unit with 100 grit sand paper to give it some texture then wiped with alcohol and let dry.  Thick CA was then applied in the appropriate spots inside the fin unit and the motor mount slide into place and let dry for a couple of hours.

Once dry I fished the Kevlar line out the bottom of the motor mount to keep it out of the way.  The inside of the body tube was lightly sanded along with the top of the fin unit that get inserted. A generous amount of thick CA was applied and the fin unit was inserted and let dry over night.

The next morning gave the rocket a quick once over and was happy with the build so far.  At this point I tied a section of 1/8 elastic cord approximately six feet long to the Kevlar line and fished that back through the body and out the top.

Next up was assembling the parachute.  The stock Parachute isn't that bad. It's a bit thin and not very colorful so you might consider replacing it. I cut a 5 inch spill hole in the chute then cut it out along the lines. I cut 3 pieces of 26 inch long #100 Kevlar line to make the lines. The parachute is attached to the elastic shock cord about 10 inches down from the nose cone.  Eventually I will attach the elastic to the nose cone once I decide on my paint scheme.

The Falcon is designed to be a simple no paint rocket. The Fins, Body tube and nose cone are all white right out of the box.  The decals are peel and stick stickers. They look pretty good as well if you are sticking with stock color scheme.

It's worth nothing that the decals are printed on white paper and are not cutout around the letters. If you choose to paint the Falcon any other color, you will have a white backing to the decals. I'm still deciding on my paint job so I'm pretty sure I'm going with something different.

The nose cone also has some pretty large indentations along the mold lines. I've filled mine with auto spot putty and it looks good.

UPDATE: While there is nothing wrong with the stock lack of paint design, I prefer something a bit different.  Stock is just boring and would be hard to see in the sky. After rummaging through my paint cans, I came up with colors that I liked and went from there.  I'm going vith a variation of the stock theme but with a bit more color. All paints used were Krylon.  he body and fin unit was painted white. I then painted then masked off two fins.  One will remain white white the other will be painted red at a later time. The Nose cone and fin unit were then painted using Patrotic Blue and let dry over night. I then masked the entire rocket with the exception of one fin and painted that Gloss Banner Red.

I also didn't care for the stock decals as they printed on white paper. The design was nice but I felt like I could do something slightly better.  Using a Cricut cutter and Orical 651 vinyl I designed and cut my own decals.

Overall i'm super happy with the results.  While the Falcon is a basic rocket I feel like my changes brought it into the modern age.

Finally got a chance to head out to a park and get this and a few other rockets in the air. Wind was pretty calm. Maybe 3-4 mph.  First flight was on a B6-4.  Lift off was quick but apogee seemed a bit low.  Flying this as a kid I seem to remember it going higher on a B6-4. Guessing we got around 250 feet or so.  Due to the weight around 2.0 oz I was expecting more but it made for a nice quick flight that landed within 10 feet of the pad.  If you are flying in a small field, this is the motor for you.

Flew a few more rockets then came back to this one. Wind had picked up slightly to 5 to 7 mph. For the second flight I went with a C6-5.  The Falcon left the pad hard.  Flight was perfectly straight with no sign of corkscrewing or wobble. I'm guessing the apogee was around 650-700 ft.  Ejection happened right at apogee and the rocket drifted about 500 ft from the pad and landed safely. I can see myself flying this one for years to come.

As stated earlier. I ditched the stock shock cord setup and went with #200lb Kevlar mounted to a motor mount ring then attached that to about 6 feet of 1/8in elastic.  I used the stock parachute but replaced the lines with #100lb Kevlar. A 5 inch spill hole was cut into the chute to help it come down a bit quicker. Overall I think this setup works well. The Falcon landed safely both flights without any issues or damage.  I wouldn't change a thing.

I would rate the kit as a 4/5 as the stock motor tube is very soft and weak.  If you plan to friction fit motors like I am, it will more than likely rip.  I would recommend wrapping the motor tube with a scrap piece of BT-50 cut to size as I did for improved strength. I also needed to add a thrust ring as my kit did not come with one.

As for finishing and details. 2/5.  In all honestly I know that this is designed for the beginner but the stock paint scheme is boring and the paper decals are just being cheap.

Now for the important parts.  How does it fly.  I would rate the flight and recovery as 5/5. This thing is the work horse I remember it to be.  Both flights were perfect.  With the changes I made the motor mount and recovery system I expect this one to fly for many years to come. 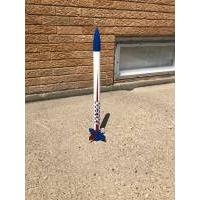