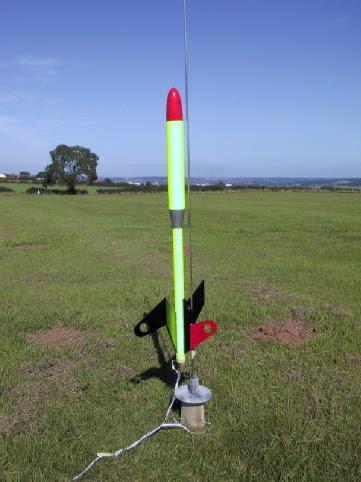 Everything arrived, shipshape and Bristol fashion in the usual Fliskits bag-with-header card. The very colorful, face card is numbered (mine is #7). The first few kits off the production line were missing the gluing jig. Mine was one of those, and the gluing jig came stapled to the back of the kit, along with a letter explaining this. Everything is of the best quality associated with FlisKits; almost spiral-less tubes, very high quality balsa components, etc. 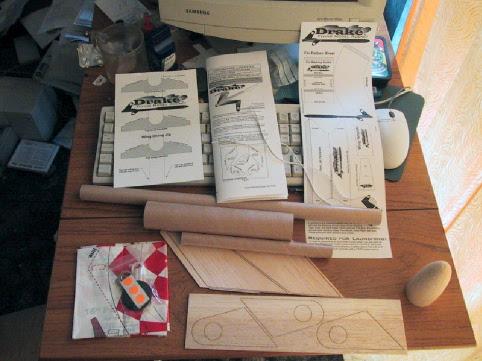 Construction begins with the wings. The joining surfaces between the wings and tips, have to be beveled to an angle of 57 degrees. This seems daunting but is made easy by the inclusion of a template. The fins in this kit have been pre-cut. This is very unusual for FlisKits kits, which usually require the builder to cut their own fins. I normally prefer to cut my own fins, but in the case of this design, I'm glad the fins are pre-cut!

The shroud is then cut out, and constructed. This brings me to my biggest complaint about this kit: the bits you are required to cut out are printed on the back of the face card! This matter was discussed, on The Rocketry Forum, where Jim Flis explained that this decision was done to keep costs down. Based on customers' reactions, I don't think FlisKits will be doing this again! Being a new(ish) company, they do need to experiment with how kits are put together. This experiment wasn't the most successful, but the company does listen to feedback from their customers, so no points lost there! I used the photocopier at work to copy the pattern sheet, which was a good thing as I messed up cutting the shroud out and had to redo it.

Next, the engine block is inserted into the end of the BT-50, using the whack-glue-in-the-tube-and-push-block-in-with-old-engine method. I had real fun here, as the engine got stuck and wouldn't come back out. I'd never flown a 24mm rocket before, so I had to use a live engine. After 5mins of pulling with a pair of pliers, I decided that the priority was saving the engine as I got out my knife and performed surgery. Needless to say, the body tube was a write off...but after a few e-mails with FlisKits, a free replacement body tube with engine block pre-installed arrived with a Flea kit I'd ordered. Yet another good example of the superb service provided by FlisKits.

The BT-50 is then marked-up for fin and launch lug locations, the shroud slipped on, and then the wings were attached. This could have been a very awkward step but the gluing jig makes this one of the easiest fin attachments I've ever done. A couple of centering rings are then attached to the end of the BT-50 and the BT60 was attached. The shroud is then glued in place to form a smooth transition between the two tubes. I found this step a bit fiddly, due to the tight fitting of the centering rings making it awkward to leave a little bit of the aft ring showing to glue to shroud to. I had to bodge this a little, but the result is most satisfactory.

After cutting the BT-20 into the "ram-jet" shape, it was attached to the top of the lower body tube, and the top stabilizer fin was attached. Here I again came close to disaster as I initially glued the fin on the wrong way! This fin faces forward, NOT backward as you would expect. Luckily, I noticed before the glue had cured, so was able to turn it around--other people reportedly haven't been so lucky. The illustrations in the instructions show very clearly the orientation of the fin so it is not at fault. I believe that the next version of the instructions will be revised to emphasize the fin's orientation even more, saving dozy builders like me from disaster. The launch lugs are then attached along the edge of the stabilizer fin.

The instructions emphasize the need for extremely strong glue joints, as the wings are put through huge drag forces when launched. I used my usual wood glue throughout and then went back over the joints filleting and reinforcing them with epoxy. Overkill possibly, but I wanted to be sure. I also reinforced the tube opening where the nose cone fits with CA. 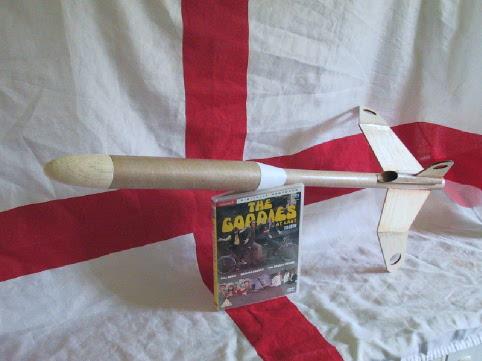 Finishing:
No decals, or any specific coloring guidelines are provided with this kit. The kit is very unusual and leaving the decoration to the builder is a good thing, as this gives the modeler a chance to get his/her creative juices (Deuces?) flowing. After a few coats of sanding sealer and primer, I gave the Drake a good coat of white gloss, then started on the main paint scheme. As the kit looks a little like a duck, I thought of a bath time rubber duck and painted mine (mostly) bright yellow. When I say bright, I mean REALLY bright! I used Plasti-kote #142 (Yellow Glow) and this stuff is amazing! In the sun you have to squint when you look at my Drake--it's so bright!

Flight:
I had just got some Nomex® from an eBay auction so I decided to try it with this model. For the first launch I used a D12-5 (C11s don't seem to be available in the UK and you need an explosives license for Es), and complemented the Nomex® with 3 sheets of wadding. She shot off the pad and flew a lovely, stable, and straight flight to apogee. Being a large'ish model she was visible throughout and looked graceful all the way. The chute ejected at apogee and she drifted down to a safe landing a couple of fields away. No damage but one of the chute shroud lines had come unstuck (this was easily fixed). 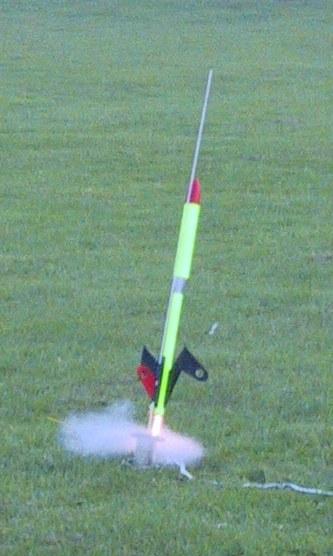 A couple of days later, I took a few friends out to help me launch my Drake, so I could get some piccies [pictures]. Both flights were on D12-5s and were as awesome as the maiden flight. The first launch of this session I only used 2 sheets of wadding resulting in a singed chute. I used 3 on the second flight and the chute was OK. No other damage was sustained on either flight.

Recovery:
This bird does tend to drift a bit so make sure you've got a few hundred meters of clear downwind area. The generous 24in shock cord does its job nicely. With such an unusual design, this bird looks almost as cool coming down as it does going up.

Summary:
This is a challenging but fun kit to build and is sure to attract a couple of comments at a launch due to its design. At first glance, this kit looks like it should have been rated at skill level 4, but the ultra-clear instructions and extras, like the gluing jig, bring the skill level down to a solid level 3. This was my first kit with the emphasis on model, rather than rocket and is a good introduction to the 'futuristic looking' side of model rocketry.

Without question, one of our more popular kits, named after Drake (Doc) Damerau who co-designed this with me for the NSL-2003 launch (named Proconsul for NSL). Having nearly sold out of our initial build, separate Fin Pattern Sheets are going to be added to future builds and as soon as we use up existing artwork, the patterns will be removed from the cover art completely. Thank you to several customers who provided this feedback! jim