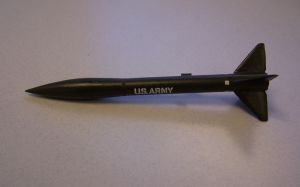 Brief:
FlisKits recently added another new kit to their line of Micromaxx kits. This is the first scale kit by FlisKits and a notable addition to the line. I have previously built a number of Micromaxx scale kits from Aerospace Specialty Products and when I saw this new scale kit from FlisKits at NARAM this year I knew I had to have it. It makes a neat addition to the display of micro-scale kits I have on my desk at work at KSC. There have been numerous Honest John kits over the years starting with the BT-50 size Estes kits from the late 60s, the Maxi-Brute Estes kit, and a couple of others. And now there is the FlisKits version to cover the small end of the scale.

Construction:
The Honest John was packaged in a small plastic bag with a folded 8.5" by 11" instruction sheet. In the package were:

The first step was to assemble the engine mount. There is a pair of centering rings laser cut from basswood which makes building up the mount very easy. First, the engine block is glued into the engine tube and then the centering rings are glued on at each end. To finish up the engine mount, the Kevlar® shock line is tied around the engine tube behind the upper centering ring and glued into place. Now the body tube has to be cut to the proper length per the instructions. My previous FlisKit required the tube to be cut as well which is odd nowadays but very simple to do. However, don't make a mistake or you are out of luck. Not too many rocketeers keep these small diameter tubes in spare stock. Once the engine mount has dried, it can be glued into the rear of the rocket making sure to feed the shock line out the front. FlisKits' instructions show the engine mount extending slightly from the rear of the rocket but I glued mine in flush.

Next up is the fins. They are also laser cut from a thin piece of basswood. I punched them out and then, as much as possible on fins so small and thin, sanded in the trapezoidal diamond airfoil. I then filled the fins with two coats of Coverite Balsarite balsa surfacer sanding lightly between each coat. When the fins had dried completely from the Balsarite, I carefully aligned them and attached them with a drop of CA glue that I drew along the joint with a scrap stick. A shot of accelerator hardened the glue and locked the fins in place. To finish up the body I then attached the launch lugs after cutting them to length to match the standoff which is required due to the large diameter of the nose cone. I used CA glue again for this and also sealed the surfaces of the basswood standoffs with the CA.

The final step was to finish the installation of the recovery system by pushing a small nail into the nose cone and gluing it into place with CA glue. The shock line previously attached to the engine mount was pulled out the front of the rocket and tied around the nail and CA glue was used to glue the line and knot securely to the nail. The streamer was then attached to the line with a piece of chrome mylar tape.

Finishing:
The now completely assembled model was then given two coats of Rustoleum gray auto primer. I sanded lightly between coats to get a smooth finish of the rocket. I then gave the model two coats of Tamiya acrylic olive green paint. The decals include Army logo and markings. There are also four decals to simulate the spin motors on the nose of the rocket. After allowing the decals to dry overnight I coated the entire model with Testors semi-gloss lacquer clear to seal the decals.

Flight:
This model was only finished for a week or so before I went out to fly it. Because this is a Micromaxx model, I had no choice but to use the Micromaxx 1/8A engine. You are also basically locked into using their integrated launch system as inserting any type of normal igniter into the "lady finger" size engines would be difficult if not impossible. I took the rocket along with two others to a local park on a Sunday morning and with assistance from my wife launched the rocket using the Quest launcher. The launch process is a bit different and starts with unfolding and assembling the launcher. The igniter is a nichrome wire that is part of a plastic igniter assembly. The igniter is firmly pushed into a socket in the base of the launcher and the rocket is positioned on the launch rod so the igniter wire is in the nozzle. The integrated controller is strung out on the wire extension cord and the safety pin is inserted. This results in a red continuity light and a continuous beep to verify continuity and warn you prior to launch. At ignition the rocket took off and flew 120 to 150 feet into the sky. The performance was impressive for so small an engine and it went somewhat higher then the FlisKits Stinger I also flew that day.

Recovery:
The streamer popped out at what seemed to be maximum altitude and the rocket, being so light, fell slowly to the ground in the parking lot. Fortunately being so light, there was no damage at all.

Summary:
This Micromaxx rocket adds another scale kit to my collection of these kits that I display on my desk at work. It was an easy build and captured the clean lines of the actual Honest John missile. The parts are of high quality which also aids in the assembly, there was really no trimming or fixes required. And as Jim told me when I bought these Micromaxx kits from him at NARAM, the performance would be impressive, especially when compared to the Quest plastic Micromaxx rockets. I am hoping that FlisKits will produce more in their line, particularly scale models or even miniature versions of well known kits. They fly nicely and make great display rockets while taking up little room.