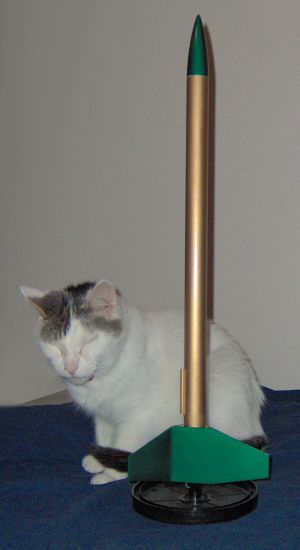 Brief:
The Thing-a-ma-Jig is almost your standard 3FNC (three fins and a nose cone) rocket except for the fin design. FlisKits' new "Jig-Tech" technology produces three fins that interlock in such a way that you're virtually guaranteed to get all your fins on straight. The Thing-a-ma-Jig (also called the TamJ) is designed to be easily constructed by first time rocket builders.

Construction:
The Thing-a-ma-Jig is a surprisingly long rocket for a first time kit as the body tube is a full 18" length of BT-50. On our kit, the nose is a 3" ogive-shaped balsa nose not including the shoulder. The three balsa fins are laser-cut and include tabs and matching holes which are the key to the Jig-Tech method of assembling the fin unit. It's almost like having an all balsa "fin can". The motor mount takes standard Estes-style 18mm motors using an engine block and retainer clip for motor retention. The elastic shock cord (not just a rubber band) is about 28" long and is tied to the screw eye in the nose at one end and to about 30" worth of Kevlar string at the other end. The other end of the Kevlar string is attached to the motor mount. There's a single 2" x 1/8" launch lug located just above the installed fin unit--in fact the launch rod will go through the fin unit. Recovery is accomplished with a 16" flat plastic parachute. I was surprised to see that 12" chutes were not used on this kit, but there's enough mass in that fin unit that the additional area of the larger chute is probably not a bad idea.

We bought a batch of TamJ kits for a build-and-launch project with a local Girl Scout troop. (My wife Thelma is a trainer for the local Girl Scout council and is a past troop leader.) The girls in the troop are primarily Juniors (roughly 10 to 13 years old) and had never assembled anything like this before. Each girl got a kit and a set of the instructions, but everyone stayed together on the assembly steps. Since we had gotten one of the first shipments of a TamJ bulk pack, Jim Flis provided us with the first release of the assembly instructions in PDF form, so I just printed out as many as we needed.

The instructions are very detailed, breaking the assembly down into very small steps. Jim explained that this is the way educators recommend that instructions be written for children: don't clump too many steps together. This seemed to work well with our group. One nice touch in the assembly instructions is the inclusion of short "rulers" in many of the early steps, marking the length that is to be measured off for each step. This does require that if you print the instructions from the PDF file, that you have scaling turned off, otherwise the rulers and the fin alignment guide will be the wrong sizes. 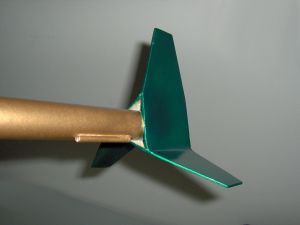 Assembly proceeds in a very logical manner with no major issues or "gotchas". The Jig-Tech fin unit does indeed make it quite easy to build a rocket where you know the fins are going to go on straight. We used Aleene's Quick Dry Tacky Glue for the entire assembly process except for inserting the assembled motor mount into the body tube. For that step we used Elmer's White Glue to avoid having the motor mount "seize" in the wrong position during insertion. Once the rocket is assembled and the glue is set, the interlocking fins form a very sturdy assembly, rivaling what you usually get with through-the-wall mounting but without the slots.

My only real complaint about assembly of the rocket is that in a group setting with builders who have never constructed anything involving detailed instructions and new (to them) construction skills, the one hour assembly time mentioned in the product literature is very optimistic, especially if the person leading the build (in this case, me) is new to the kit as well.

Finishing:
The Thing-a-ma-Jig does not come with decals at this time. Since we had such an early batch of TamJ's sent to us, FlisKits had not even come up yet with a color scheme for the package art. But it wouldn't have mattered for our group, because each Girl Scout got to take her TamJ home to paint any way she wanted to. My only guideline to them was to keep any paint out of the launch lug. The girls got quite creative in their paint schemes, mostly using brush on paints.

Flight and Recovery:
The Girl Scouts got to fly their Thing-a-ma-Jigs at the June monthly launch of the SouthEast Alabama Rocketry Society (SEARS #572), which my wife and I are members of. I checked over each rocket to make sure the nose fit properly and that everything was firmly attached. I had already demonstrated to the girls at an earlier meeting how to fold and pack their parachutes and how to load their motors and insert the igniters so they could prepare their own rockets for flight. I had bought a bulk pack of Estes B6-4 motors for their first flights. We had one rocket whose motor mount was not glued in as well as it should have been, so we fixed that one on the spot. Each girl also received four squares of Estes recovery wadding to load before packing their chutes. Once all the rockets were ready to go, each girl filled out a flight card and then it was off to the pads. Another club member and I watched as the girls loaded their rockets onto the launch rods and connected the igniter leads. Once everything was ready, each girl got to give the countdown for her rocket, and with the LCO on the interlock button, she would get to press the launch button to send off her rocket.

Each Thing-a-ma-Jig flew straight as an arrow with little to no spin at all. I'm guessing they got up to about 500 feet when they popped their 'chutes then came down within easy walking distance of the pads. We only had one recovery failure where the knot tying the elastic and Kevlarshock cords together came apart. So that rocket's nose came down under the parachute, while the body glided backwards to the ground spinning like a pinwheel about its axis due to the unique shape of the fin unit. Once the parts were retrieved and the knot was retied, the rocket was ready to go again.

Most of the Girl Scouts took advantage of our big multi-pad launcher to fly their Thing-a-ma-Jigs again in a mass launch. Again, every rocket that left the pad (we had a stubborn igniter on one) flew beautifully and came back down intact.

Summary:
This rocket is a very good kit for first time builders, although I think the "one hour" assembly time advertised for this rocket assumes the builder has some basic assembly skills already such as how to apply a bead of glue without getting it everywhere, how to cut strings to a uniform length, and so on. The novel fin construction does make it very easy to build a rocket that will fly arrow straight and won't fall apart during handling or in flight.

PROs: Easy to assemble properly, hard to screw up badly. Unique design catches the eye of even seasoned flyers. Rocket recovers itself gently even if parachute detaches from body.

CONs: It took us a lot longer than one hour to build about ten of these in a group setting.

This is an awesome beginner rocket and a fun flyer for rocketeers of all levels. Because of its novel "fin jig", it's great for younger modelers who might have trouble attaching fins straight. It's pretty much impossible to mess up. It flies high and straight on A through C sized engines. Since I tend to be a small field (New England) flier, I recommend cutting a spill hole in the parachute to reduce drift. Since the fins lie completely above the rear of the rocket, a fast landing is unlikely to break them. As with all FlisKits, the instructions are excellent and fun. Quality parts all around. Given its ease and minimal build time, I highly recommend this kit for rocketry classes or as a gift for newbies. It is taller than most 18mm rockets which also makes it more attractive.