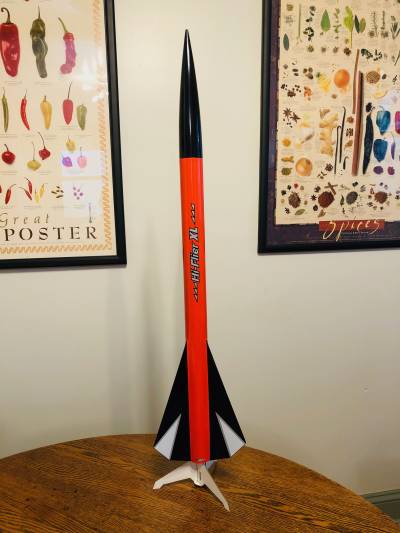 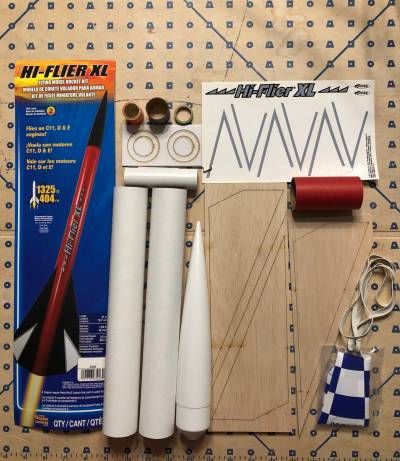 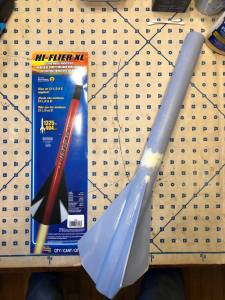 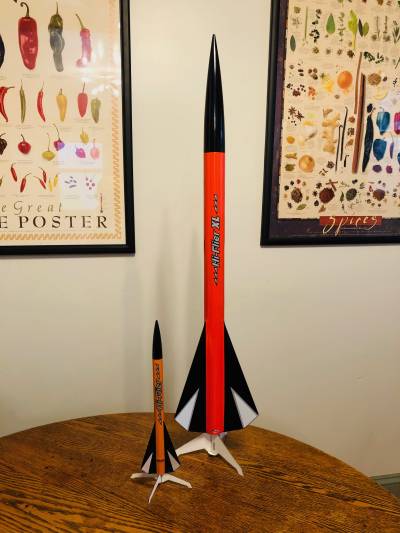 Estes instructions are straight forward IMHO.  The diagrams are clear and easy to follow.  I had built other Estes Kits over the past few months, including the Hi-Flier. So I wanted to add this bigger brother XL version to my collection.  (Born again rocketeer.  Just started back up Oct 2020 after a 40 year hiatus)

Motor mount assembly was easy and straight forward. I am not a fan of the Estes shock cord mount method.  Therefore, when building the motor mount, I tied Kevlar Cord (150lb) around the motor tube and under the motor hook. Slipped it through the notch in the centering ring and glued the knot and cord to the mount.   Post build I will attach the kevlar cord to the elastic shock cord.  I learned this method when I built a Quest rocket.

It was nice to be able to sand and shape bigger fins as compared the smaller fins/models I had previously built.   I used watered down Elmer's wood filler to seal the fins.   Gluing on the fins was straight forward.  I used the Estes fin alignment jig.  It's not a perfect jig, especially with these larger/bigger fins, but it helped get the job done.   I applied multiple layers of wood glue for fillets.  I was not happy with the way the fillets looked, nor their size/shape.  I then used a little bit of BSI long-cure epoxy to enhance the fillets.  A metal rod was used to drag and smooth out the fillets. Wiped the rod off after each drag. Process was repeated several times for the desired effect.

I then glued in the motor mount.  Used a dowel to rub some glue on the inside of the tube and slid it halfway in.  I then put in more glue for the aft ring and slid it in the rest of way.  Applied fillets to the aft ring and used a dowel to reach inside the tube to apply a glue fillet on the top center ring. During this process the kevlar cord was pushed out through the motor mount so it was out of the way.

The main "gotcha" I ran into was gluing in the tube coupler.  This was my first build with a coupler and a huge learning experience.  I rubbed a little Elmers wood glue on the end of the coupler as well as inside the tube.  Unfortunately by the time I did that and slid it in, the coupler seized within the first 1/4inch.  I tired to push a little harder and in the process started to see a small crease/wrinkle in the tube at one of the spirals.  Lesson learned that in the case of a tube coupler, more glue would have been better (thanks google).   I placed an order for a new coupler and BT-60.   Fast forward a week and the parts arrived.  Cut the new tube to length.  This time used a very generous amount of glue inside the tube and on the coupler.  Slid in like butter.  Attached the bottom tube with the fins in the same way.

I used water down Elmer's wood filler to seal the tube spirals as well as the section where the tubes were joined.  After it dried it was sanded down.

Rustoleum gray primer was applied and sanded down.  I did not like the way the joint looked where the tubes met.  The fillets also need a little work so more watered down Elmer's wood filler to the rescue as well as more sanding.  This second application did the trick.  See attached picture.  I then applied another light coat of primer and a final wet sanding.

Paint scheme was slightly different than the package, opting for orange rather than red.  Ace Hardware Gloss bright orange on the tube (tested on scrap pieces to make sure it did not have a strange interaction with the Rustoleum primer).  Rustoleum Painter's Touch 2X semi-gloss black on the fins and nose cone.   I did not like the finish on the nose cone after several coats.  For some reason black shoe polish came to mind!  Apply and buff and that did the trick.

Two coats of Rustoleum clear gloss for sealing and protection. 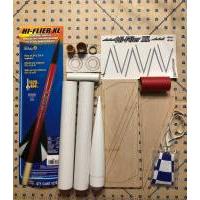 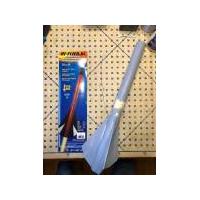 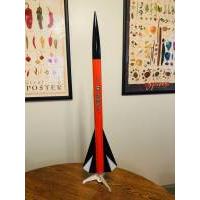 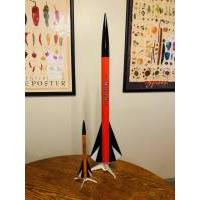