I ordered this kit on eBay on Sunday 9/16/12 and just received in the mail today (9/19/12). Fast service. This is the newest kit from Estes and is not yet listed in there 2012 catalog but available on eBay. It looks to me to be based on Boeing's 737 line of jetliners. 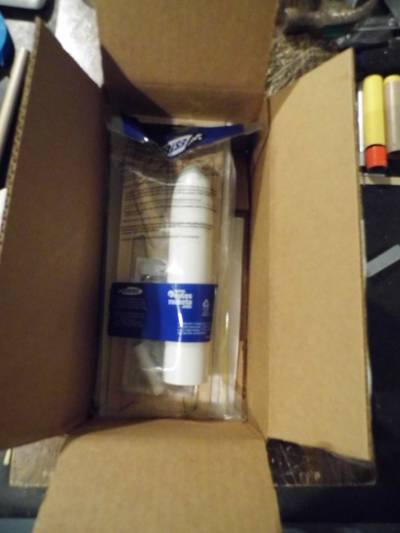 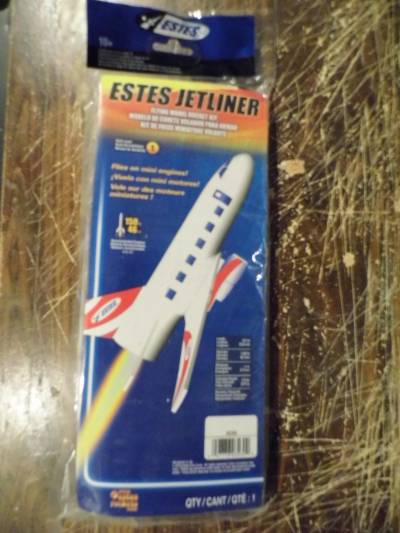 The Jetliner comes with the following parts: 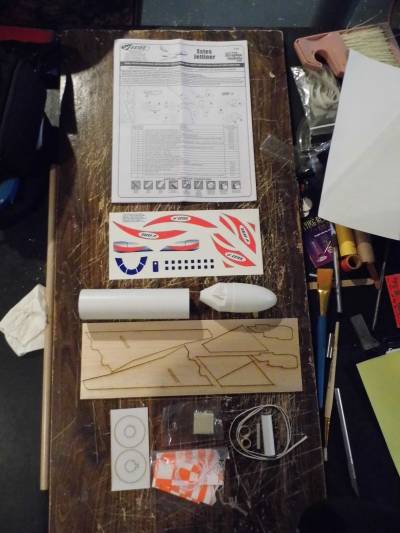 Construction of this kit was simple and straight forword in typical Estes style.

The instructions are printed on a single piece of paper 11" X 23 1/2" and folded in thirds. I did however deviate from the these in two places.

The first was two build two motor mounts. The stock mount which became "Little Me-Me" and an 18mm mount for actual installation.  This is the first kit I've built from Estes where the engine mounting is almost the last step of assembly.

The next alteration was fin prep and wing assembly. All rockets I've built in the last five years have had the fins paper laminated and this build was no exception. An extra advantage to this is that when gluing the wings together instead of using wax paper and waiting for the parts to dry and then peeling them off the wax paper, I glued the wings together then glued all balse pieces onto white paper on one side first. Then I cut them out with an Xacto knife and then repeated the process on the other side. I then placed all parts between a couple of heavy books to ensure they dried flat.

After that I rounded the edges. The only con to this is that you can't see the joint in the wing for alignment when you go to glue the wing to to BT unless you make sure to mark it after paper is applied. 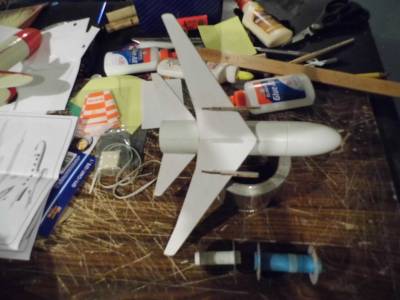 Finishing was simple thanks to the paper on all surfaces. First, two quick coats of 2X primer with the usual drying time and light sanding between coats; followed by two coats of gloss white. The rocket was the taken outside to air dry for the day. 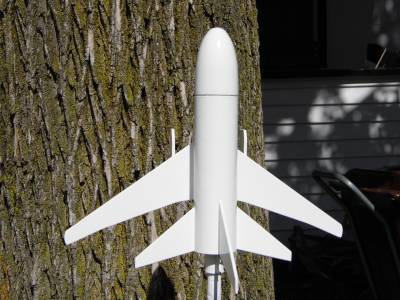 After that the decals were applied. 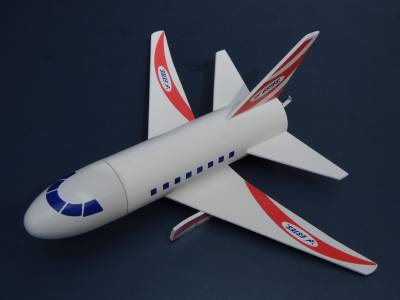 After decals dried, I then applied a couple of quick coats of Clear-Effex paint to seal decals and give the rocket a bit of sparkle. 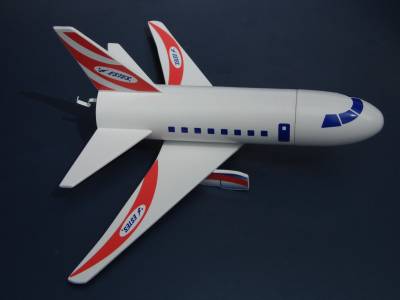 For the purpose of this review and to be true to the stock version, I grabbed one of the new Estes 13mm-18mm adaptors (Estes part 302316) and placed an A10-3T in it then loaded it into the rocket.

The rocket was the taken to the pad and placed on the launch rod. The count down was given and the launch botton pressed.

Houston... we have a problem.

In all fairness what happened next was not all the fault of the rocket. Instead of launching from my Estes pad I stuck the rod in my Mantis Launch Pad but did not have my usual clothes pin clip to secure it in the pad. When the rocket lit it hung just enough on the rod to pull it up out of the mount causing it to fall over. All of this motion happened in the blink of an eye with the end result being that the rocket arched over and flew horizontal to the ground at an altitude of about 30'.

Now I must admit that this looked pretty cool, but was not according to the flight plan. Once the motor cut-out, the rocket quickly dropped to the ground with ejection charge going off after the crash landing and melting the 'chute. This happened because, in my haste to launch this one, I forgot to put in any dog barf. The rocket itself suffered no damage in spite of the hard landing. I really thought one of the engine decorative pieces would be broken off, but rocket is solid. 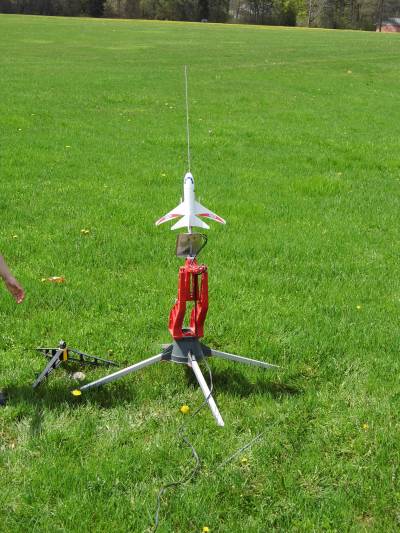 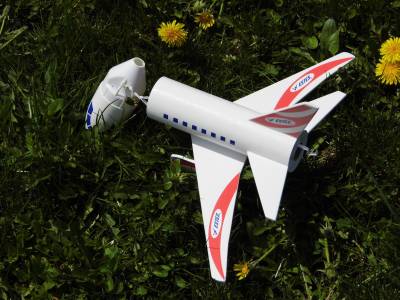 Six days later, and with a new 'chute, we tried again. This time on the Estes pad and again with the adaptor and an A10-3T. Successful launch this time, but not much better of a flight although rocket did go straight up, just not very high. Parachute ejection was about 10-15 feet off the ground and never really opened before rocket again crashed. 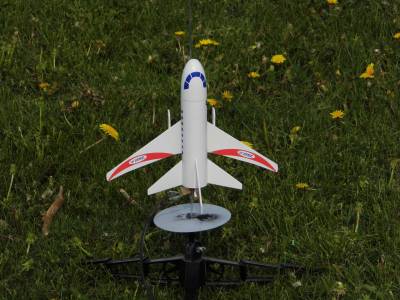 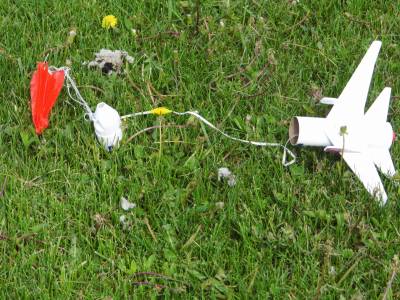 From my stand point, this rocket should not be flown on 13mm motors. Third flight, (second of day), was on a B6-4. Now this was a beautiful flight with rocket climbing to a couple hundred feet or more and chute ejection just past apogee. I had originally intended to make the third flight on an 18mm A8-3 so I could compare it with the 13mm A10-3T flights, but after the poor performance of the 13mms decided to go straight to a 18mm B motor.

After screwing up on the first launch and replacing the parachute with a spare, the next launch was better with 'chute deploying at least before hitting the ground. Flight three was perfect. The stock chute was up to the job and the rocket was recovered with no damage. 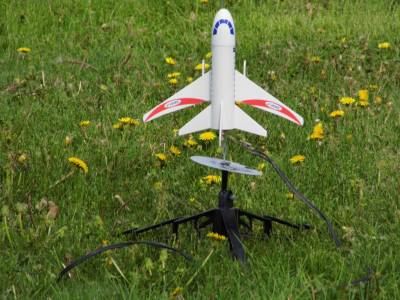 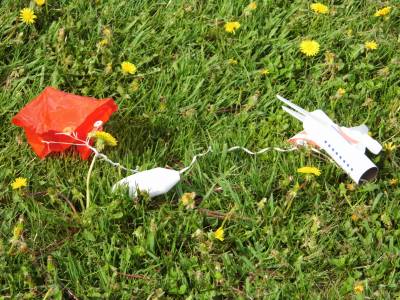 This is a cool addition to the Estes line, but in my opinion is under-powered. I would recommend anyone building this kit to go ahead and build the 13mm mount but don't use it. Build an 18mm mount to install instead as this rocket is screaming for more power. When I get to a club meet we will have to try a C6-5.

On a side note: Take the unused origanal motor mount and drill two holes in line on the oppisite side from the clip large enough so that can slide it up and down a launch rod as a spool rocket. I call mine "Little Me-Me" and the kids love it. Have thought of building a few more of these from scratch to give away to kids at the park on the 4th of July. Just the sort of thing to spark their intrest in the hobby. Always trying to play foward. 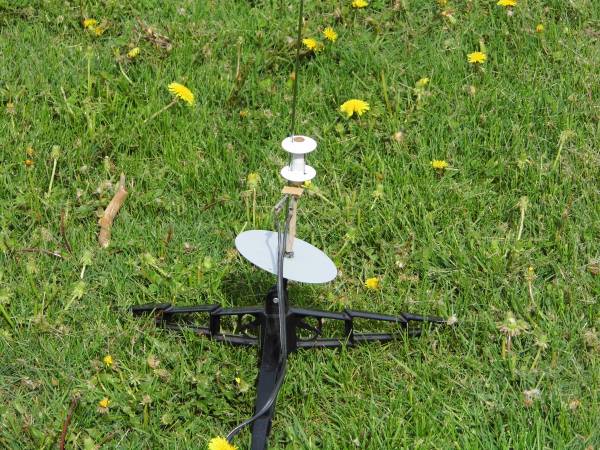