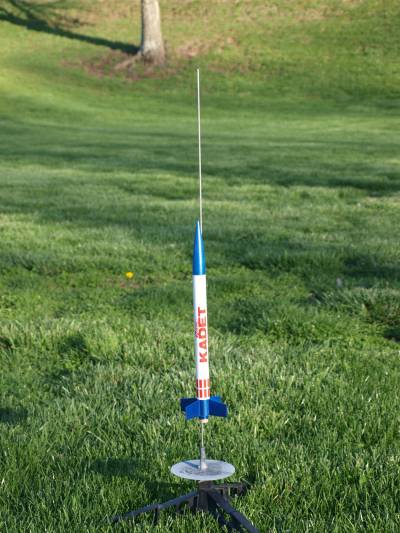 This was a project that came out of a cleaning session in my build room.  I had been looking for a project in the plan collection at YORF.  http://www.oldrocketplans.com/  I clicked on the Kadet plan and realized that I had everything I needed laying around my build room.  The fin can was one of the few parts I salvaged from a B6-4  CATO in an Estes Skywriter, the body tube came from another Skywriter kit that I'd scavenged the nose cone from for another project, and the nose cone from a Mini Max that CATO'd on a C11-7 flight.  Everything else came from my parts stash, which is what I call the floor of my computer loft.

I'd previously built the Estes Skywriter kit on a couple of occasions and was familiar with the amazingly quick build that rockets with that fin can were.  This one was no exception.  The tube was already pre-cut to size, and no fin attachment was necessary, so the bulk of the work was in figuring out where the centering rings needed to be attached to allow access to the business end of the motor mount.  Marks were made in the appropriate places on the motor tubes, then the top tube was glued in place.  A length of Kevlar was tied around the body tube behind the centering ring, and a shallow cut was made in the ring.  The Kevlar was led out through the cut and pulled back through the motor tube to keep it out of the way of the glue when it slid into the body tube.

Since the body tube was pre-colored yellow I needed to be sure the color wouldn't bleed through the final white coat, so I used Kilz primer.  There was also some scorching on the fin can from the CATO that needed to be sanded away and covered.  After the initial hit of Kilz, I applied thinned Elmer's Carpenter's Wood Filler to the tube, sanded it off, and reshot it with Kilz.  Any yellow that can bleed through at this point has earned my respect.  The whole rocket was sprayed with Valspar gloss white, then after drying for a week the body tube was masked off and the fin can and nose cone then sprayed with Rustoleum Metallic Blue that I had left over from another project.  The decal was printed on inkjet decal paper with my Epson 7800 printer.

First flight was the 2016 opener at B6-4 field, which isn't that bi a deal when you consider that I flew it on an A8-3.  It was a perfect flight night, sun on the horizon, light breeze, and not a soul around.  I was in dead left field within 30 feet of the trees, and what little breeze there was was blowing back toward short center.  Perfect recipe for a mid to high level flight on the field, which in this case would have been a B6-4 flight.  The A8-3 flight topped out around 200 feet, a definite tweener.  Recovery happened in short center.  It almost felt like I knew what I was talking about. 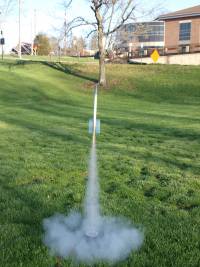 Pros: A late 70's/early 80's vintage rocket that can be build in an evening with currently available parts.

Cons: I've only flown it once. 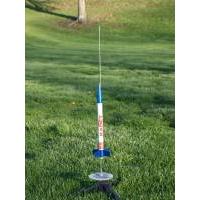 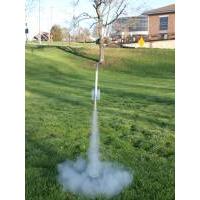 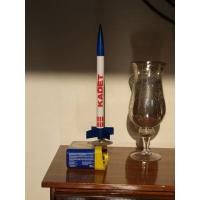