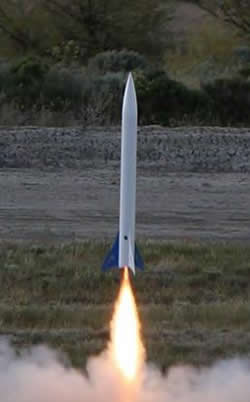 Brief:
The Solar express from Madcow Rocketry is a mid-power rocket kit that flies on 29mm F and G motors. It's a great addition to an established mid-power fleet, and will fly on a wide range of mid-power motors (or probably even some Hs if you're willing to try it). The quality of the kit is superb, and it's a quick, enjoyable build.

The only modifications I made were to replace the launch lugs with rail buttons, and to add an Aeropack motor retainer. I also swapped out the included parachute for a 28" one.

The fit of Madcow's parts are exceptional. I was able to dry-fit the whole kit together right out of the bag. 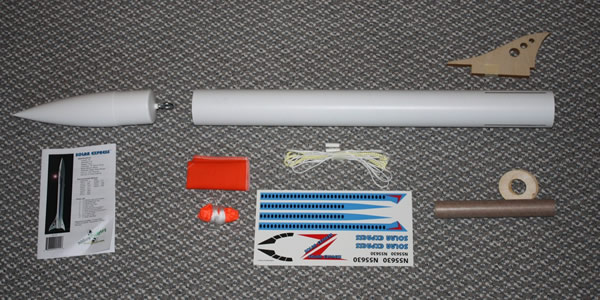 Construction started with the attachment of the Aeropack retainer. I used JB weld as per Aeropack's instructions. Next,the aft centering ring was epoxied forward of the retainer.

Next, I ignored the instructions and installed the forward centering ring with spacing equal to the lengh of the fin's TTW tabs... this was a mistake.

The motor mount was then epoxied into the rocket, followed by attaching some rail buttons. Next was epoxying the fins into their pre-cut slots. Each fin got epoxy fillets, and construction was complete.

Finishing:
Finishing on this rocket is fairly simple, the most difficult part being the waterslide decals.

The airframe recieved the same treatment as the NC. It was sprayed with Rustoleum automotive primer, then two fins were masked off and it was painted white. The masking was then reversed and the unpainted fins were painted blue.

I was quickly trying to get the rocket finished before a launch, so I didn't have time to apply the decals. 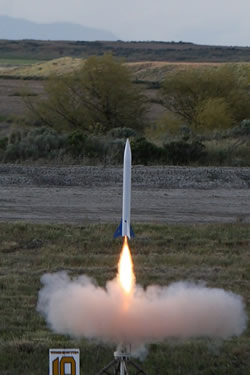 After the launch, I decided to leave them off entirely.

Flight:
The first flight of the Solar Express was at the Washington Aerospace Club's Fire in the Sky 2010. It flew on a Cesaroni F36 Smoky Sam, a motor for which RockSIM predicted a flight of about 650'.

As was the case with an earlier flight of my Pemberton Technologies 3FNC, this motor seemed to underperform a little. Ejection was late, but not enough to cause any damage.

The rocket's next flight was on an AeroTech G64W. This flight was much quicker off the pad than the last motor, producing a nice, straight boost to what looked to be close to the RockSIM-estimated 1800'.

Recovery:
The 18" 'chute included with this kit simmed out as way too small. I switched it out with a 28" 'chute and the rocket came down at the right speed for my comfort.

The first flight landed about 100' or so from the pad. By the time of the rocket's second flight, the wind had picked up a good amount. The rocket landed a third of a mile away.

Summary:
The Solar Express is yet another of Madcow Rocketry's great products. It's easy to build, flys well on a very wide range of motors, and is a cool looking rocket to boot. The only potential con I can think of is the small size of the included parachute, but an established mid/high-power flyer should have a large enough collection of 'chutes to remedy this.