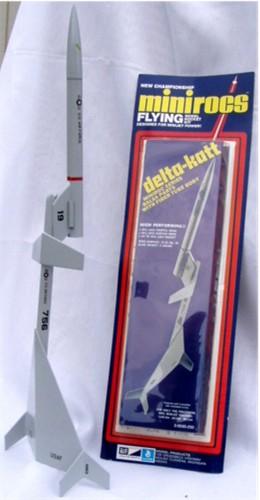 The Delta Katt is another MPC Miniroc that blasts aloft on 13mm engines. It is technically a front engined canard Boost Glider. It was designed by G. Harry Stine for the MPC Miniroc series. A small booster rocket attaches to a delta winged front canard glider by way of a 3 piece sandwich of balsa that encloses a balsa pin. This pin fits into a cut on the nose of the glider. This connection needs to be tight enough to hold the booster and glider together but not so tight that they can't separate. At apogee the glider detaches and glides home and a red white and blue streamer is deployed from the Booster.

The Delta Katt is another of the MPC kits that comes in a cardboard backed plastic blister pack. Incorporated in the plastic blister itself are many vacuum formed customizing detail parts. These can be carefully cut from the blister, trimmed and then glued to the rocket to simulate things such as cable shrouds, vents, scoops, pilot canopies and the like. Be sure that if you use these parts you only use Enamel paints for finishing your rocket. I don't recommend using them for this rocket, and didn't. For a rocket of this type you want to keep the aircraft as aerodynamically clean as possible.

There's a small water slide decal sheet that comes with the kit. They are for the most part air force markings and a strip of red that is applied to the booster just forward of the glider mount.

The plans call for a slight dihedral in the front canard and a flat wing, but I built mine with a matching dihedral in the main delta wing as well. I did this to add stability and decrease any roll oscillating. Just looking at the glider you would tend to think that it flies with the body below like a high winged aircraft when in fact it's a low winged glider. The Body itself is assembled by first cutting a paper template from the template sheet and drawing out the body on a strip of 1/8" thick balsa. The pin that holds the glider, and the middle piece of balsa that holds the pin, in the balsa sandwich that forms the booster mount are also 1/8" balsa stock and must cut out using paper templates. The rest of the glider is made from die-cut 1/16" balsa sheets. This is necessarily thin stock so that wing loading and weight can be kept to a minimum. Try to keep this in mind as you are carefully cutting it from the sheets. It will keep the frustration level down if any little bits of the parts come apart. I've found that when you finish a cut never finish it on a sheets edge. For example If a cut is made across a sheet of balsa start the cut at one edge, cut half way through, stop turn it around and start a new cut on the other edge. Always cutting towards you. If you end a cut across an edge it is sure to chip little bits of wood off the edge. This applies to any model but is especially crucial with this thin stock.

Once I cut the body and other 1/8" stock parts from their blanks I sanded them to their exact shape. I Pin the templates on and leave them on till the parts are sanded to the exact shape I want. Once I got all of the wing and canard parts cut from their sheets and got any pieces that broke off back together. I started the sanding process. On the wings and canards it's better to just use a 45 degree angle that runs to the top surface of the wings on all of the leading and trailing edges. This is more efficient on an aerofoil than the typical compound angles sanded into the edges of a rockets fins, or even the vertical stabilizers on this glider. After a crude 45 is sanded with a sanding block or dremel try to soften the edges a bit by hand. When everything was ready for glue I started with the wings. You'll be using a lot of wax paper for doing the gluing. Although it doesn't mention it because the Delta Kat was to be a flat wing, I sanded a slight angle into the glue edges so they would match up better for the dihedral I decided to add.

They were laid out on waxed paper and their identical size was confirmed. I glued the edge on both and pressed them together. I then used match books to raise each wing tip up about ¾" to create the wings dihedral. I followed the same procedure for the canard wing. Once the glue had set I hand fingered into the seams 3 coats of glue fillets to strengthen the connections. When the wing was finally ready it was measured and marked for the proper placement of the glider body. Once it was connected the canard was glued on to the body, forward of the wing. It's essential to get the measurements for the placement of the glider body onto the wing, and the canard onto the body, exactly as indicated in the instructions. If you are off even a little bit your glider won't fly properly. Once the glider was together I added the wings top and bottom vertical finlets. The top fins are put on to have a slight outboard slant and the bottom ones are put on to hang straight down. I accomplished this all using the mark1 eyeball. Once again all glue seams were reinforced.

The booster rocket it a straight forward affair. It's a simple short mini rock with an engine mount that has no retainer clip and just an engine block. The nose cone is balsa with a metal screw eye for the shock cord. The booster's glider mount consists of 2 trapezoidal pieces of thin stock around the pin and pin holder, that was cut with templates from the thicker 1/8" stock. Once this assembly is formed and glued together it is glued to the trailing edge of the booster. The launch rod guide is glued along the seam where the glider mount is glued to the booster. The streamer that the booster comes down on is simply tied to the shock cord which is just string. The shock cord is mounted to the booster in the typical MPC manner. It is threaded through 3 holes in a piece of card stock and then glued into the body tube far enough in so is doesn't interfere with the nose cone.

After everything was completely assembled it was given a final sanding and then it headed to the paint shop where it was clear coated, sanded and clear coated again. This before any paint was applied. The paint scheme called for a battleship grey covering both the booster and glider. I used a nice high gloss enamel grey because the smoother and shinier it Is, the less drag it will have. One last note. Be sure to paint the booster and glider assembled as one piece and paint them that way together for each coat, and once the glue is tacky enough separate them between coats. You don't want to get glue on the body of the glider where it fits into the mount or get paint inside the mount. It can bind your glider when it is supposed to detach.

It's a challenging kit to build perfectly, but the outcome more than makes up for all the time and frustration you invest in building this kit. And if you are worried about loosing it. Like all MPC kits it also comes with a small "please return to" sticker with places to put your name and phone number should you loose it and some one else finds it. I'm not sure it would work too well in today's world but I'm sure it was a good idea 30 years ago.