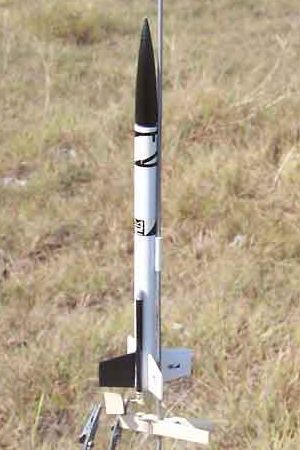 Brief:
This is a 4FNC OOP rocket that flies on 13mm motors and uses parachute recovery.

While waiting for various things to happen on other current projects, I decided to start one that would be quick. I have several old MPC kits that would seem to be fast, straightforward builds and the Taurus-1 was sitting on top. It seemed to be just the ticket.

Construction:
The first step was very straightforward. I took the thrust ring and glued it into the end of the motor tube. It was to be flush with the end. I used yellow glue and applied a thin cap of glue to the flush edges as well.

The next step was just as simple. I was instructed to use a swab to smear some glue 2" in from the aft end of the body tube. I then slid in the motor mount until its back end was flush with the body tube, making sure that the thrust ring was foremost.

Next up came the shock cord mount and here I deviated some. First off, the supplied cord was a piece of string. I cut off a length of Kevlar®. Second, the instruction alluded to threading the cord through a paper mount. I looked in vain for the mount and did not find it in the package or as a cutout in the instructions. Even as much as I detest them, I decided to make my own Estes style tri-fold mount by cutting up some loose paper laying around. (It was the instruction sheet to a FlisKits Baffle which seemed appropriate since I had bought this kit from Jim Flis). The mount was glued in in the standard manner.

I needed to let things dry for a while so it is fortuitous that the next step was to insert the eye screw into the NC. I secured it with a dab of glue and set it aside to dry as well. 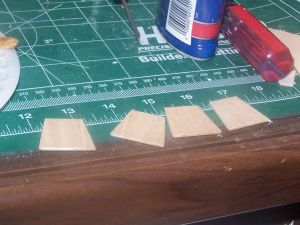 The kit comes with 4 die cut fins. Of the four, 3 were loose in my package but were in good shape.

The instruction go out of their way to promote a double glue joint. They do this by instructing you to take the fins at this point and smear some glue on the root edge. They then make clear that you are not to glue them to the body but let the glue dry, telling you that this will result in a stronger joint later on.

The kit comes with a wraparound fin marking guide that must be cut from the instruction sheet. When it is cut out, it is taped around the BT and the fin marks are transfered to the body. Those marks are then extended long enough for the fins. 3" is plenty. After than a small bit of glue is applied to the fin lines and allowed to dry, again in preparation for the double glue joint. Before applying the glue, though, I used some #180 sandpaper to rough up the lines a bit. The BT was very smooth and I wanted the glue to get a better grip.

By the time the previous step and a lot of intervening life were completed, the glue on the root edges of the fins had dried out. I used that opportunity to sand a bit of a curve into the leading and trailing edges. The fins are delicate so I used a sanding stick.

I messed around in the shop for a little while to allow the glue on the BT to finish drying but that did not take too long. With the glue dry and the fins sanded, it was time to glue the fins to the BT. I did one at a time, applying a small amount of glue to the root edges and pressing the fins into place flush with the aft end.

I let the glue set up and then began to fillet the fins. This was done as the rocket sat in a horizontal cradle with yellow glue. While waiting for the glue to dry, I also attached the launch lug, again with yellow glue.

Attaching a piece of sewing elastic to the Kevlar® and nosecone finished the standard part of the build but there were some optional steps I followed as well.

The kit came with what looked like 2 very long, approx. 3", launch lugs. These are intended to be strap-on boosters. I glued them on opposite sides, 90 degrees from the launch lug. Each tube was centered between a pair of fins and aligned flush with the bottom of the BT.

There were still some more optional steps but I opined that doing them before painting would be counter-productive and a real pain in the...tail cone.

Finishing:
Finishing began with preparing the balsa for painting. Because of the tight spaces, I decided to use sanding sealer in lieu of Elmer's, reasoning that it would be more forgiving of my patience in getting sandpaper wedged into the nooks between the fins and the side booster. I put on an initial coat and let it dry for about 5 hours. I then gave it a light sanding with 400 grit sandpaper and applied another coat. It was at this point I remembered that the NC needed sealing as well and I gave it its first coat.

The balsa took a total of 4 coats of sanding sealer before I was satisfied. After the last coat had dried, I sanded lightly with the 400 grit sandpaper and then took it to the spray booth where I applied a coat of Kilz.

The Kilz was sanded lightly and then 2 coats of white were sprayed on.

The white dried and then the difficult part began. The paint scheme is a simple one but, for me, it was difficult to mask. The whole rocket is white with the exception of the nose cone, one fin and the two strap-ons on the side. Masking for the nose was no problem but I was never able to get the rest of the rocket masked so that the strap-ons and a fin were exposed without blocking the paint stream. That being the case, I took it in two steps and first masked the reset of the rocket except for the strap-ons. I then painted them black.

When they had a chance to dry for a while, I peeled the masking and reapplied to expose 1 fin. That fin too had to be painted black.

When the masking was peeled, the rocket did not look too bad. There were some places along the strap-ons that did not get enough paint but I used a brush to touch that up. 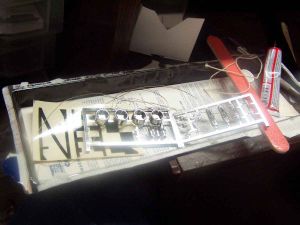 A big part of the finishing on this kit involves the use of plastic detail like you would find in a garden variety plastic model kit. I have the distinct impression that the two plastic racks that came with the kit were intended for a plastic model and just added to this kit. I base this supposition on two things. There is much that is provided that is shown nowhere on the artwork much less the instructions and many of these piece just could not be made to fit. Also, the only four pieces called for are all found attached to one sprue. There is nothing needed from the second one.

The first of the plastic pieces to be attached were the two rocket nozzles that fit into the strap-ons. They were a snug but reasonable fit and were fixed in place with tube type plastic cement. The other pieces were the two nosecones which were affixed to the strap-ons in the same manner.

The metallic silver finish of the plastic adds to the overall model. I decided not to add any of the other pieces and am saving them for when they might come in handy.

Like the plastic, there seems to be many more waterslide decals than can actually be used on the rocket. For example, there are 4 different roll patterns included on 2 different sheets. There are a few small logos like the USAF shield, US flag, MPC logo and lots of "United States" and numbers in red, white and blue. I decided to stick with a fairly basic scheme similar to the one on the face card.

I was a bit worried about the age of the decals but I did nothing special to prepare them. I was quite pleased with how well they held up. They are fairly thick and did not crack or deform in any way. In fact my biggest problem was getting them to lift from the paper. If an edge folded over, there was no problem getting it straightened out again.

If I have one real gripe its with the scaling. The roll patterns were just a touch too long and did not mate up properly.

Flight:
The Taurus-1 had its initial outing at a Freedom Launch of the Amateur Rocketeers of Texas. It looked kind of out of place with all of the big rockets there but, I didn't have to walk as far as some of the others!

The first flight was on a 1/2A3-2T. It boosted perfectly and popped its ejection charge just before apogee. It then drifted down rather rapidly and landed in a nearby fence. Thankfully, this was not one of the electrified ones.

The second flight was on an A3-4T. It too featured a perfect boost with ejection, as best I could tell, before apogee. It again fluttered down to land nearby without sustaining any harm. 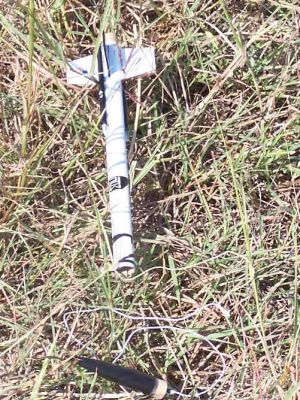 Recovery:
The rocket came with a parachute but I decided to treat it as just a nose-blow because it is so small and light. It recovered fine on both flights without any damage but I will use a streamer in the future to make it easier to track.

Summary:
This is a cute little 13mm rocket that is a stage up from 4FNC. The added details give it quite a bit of character. It performs well and its a shame that it is not available anymore.