This is a long OOP Estes starter set from 1999, a tie-in with Star Wars Episode 1, The Phantom Menace.  The kit consists of an almost-read-to-fly (ARF) model rocket, a plastic Naboo Fighter with display stand, a simple Star-Wars styled launch pad and launch rod, and an interesting launch controller shaped and decorated like R2D2.  The set comes with two A10-3T engines and ignitors (starters), plus a single square of recovery wadding. 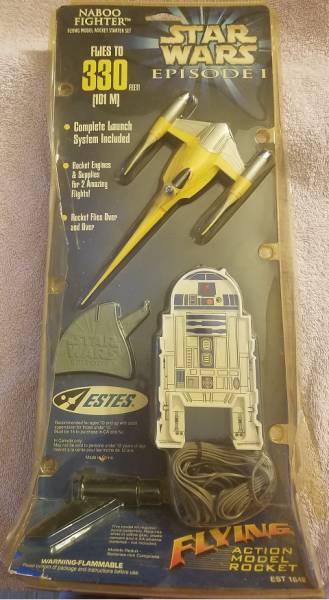 The starter set consists of a bunch of one-off components.  The ARF rocket is pre-finished in black and requires only minor assembly using plastic model cement.  In fact, several of the steps in the instructions had already been performed.  The rocket tube is an odd size, a little larger than a standard Estes BT-5 at .57" (14.6 mm) O.D.  The model comes with a Star Wars themed plastic parachute, also already completely assembled.  The shock cord in my kit was pre-attached to a plastic tube coupler that joins the two sections of body tube.

The Naboo Fighter itself is very interesting:  it comes in two pieces, with a center tail piece that remains attached to the display stand.  The rest of the fighter slides over the model rocket, to fit into a notch in the plastic fin unit.  It actually looks pretty neat and is a clever way to turn a Naboo Fighter into a flying model rocket.

The launch pad is very basic, in that it does not provide a way to angle the launch rod.  Decorated like a piece of Imperial engineering, the pad has some fragile details that would not sustain much field abuse.  Clearly, of course, this starter set is not meant for a lot of use - rather, a quick introduction to the hobby, and a tie-in to the movie.  There are two features of the launch pad and rod that make this even more foolproof than usual. The two-piece launch rod has a plastic fitting at the end that locks into the launch pad, and a crimp that acts as a launch lug stop to hold the model above the deflector plate.  The pad legs snap into place, and are not really meant for subsequent disassembly.

The launch controller is a unique unit made in the silhouette shape of R2D2, with a paper decoration image of the front of R2.  It is a solidly made controller which, unfortunately, uses a 9-volt battery, making it underpowered. Continuity indication is a single red LED, strategically placed in R2's "eye".  The safety key is a standard Estes pin-type, which includes the safety cap for the top of the launch rod.

The oddest feature of the R2D2 launch controller is on the back:  a stubby cylindrical projection with many holes in it.  It seems that the designers planned to include an audible continuity alert - maybe even "droid sounds" - but abandoned it.  Opening the controller, the speaker / sounder well was covered with a glued-in cap with a hole likely intended for lead wires.  Opposite this speaker well is a small circuit board holding the LED and resistor and the contacts for the safety key.  The launch button is a section of R2's body - a spring-loaded plastic section that makes contact with a momentary pushbutton switch on the circuit board.  The cap glued into the speaker well has a small knob that supports the circuit board under the pushbutton switch, ensuring secure contact.  For such a simple item, I was impressed with the engineering details.

The speaker well is about 30 mm ID and 10 mm tall.  I found a Mallory Sonalert piezo buzzer, PF-27N36WQ, that will fit snugly inside the speaker well with a little Dremel work, with solder pads sanded and drilled in the circuit board.  I will install it in the controller, which I will use with electric match and old-school flashbulb ignition launches. 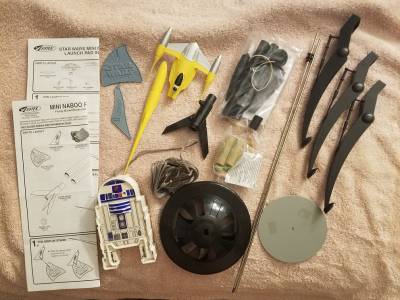 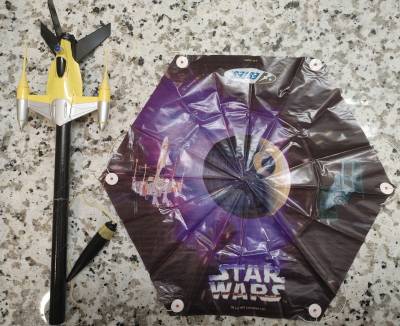 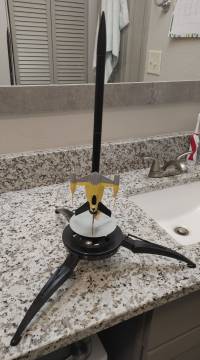 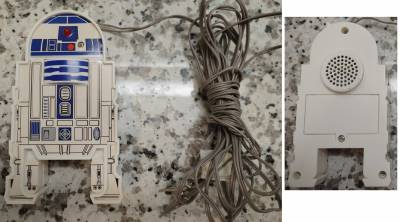 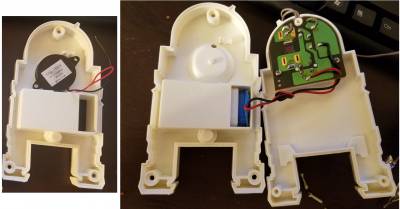 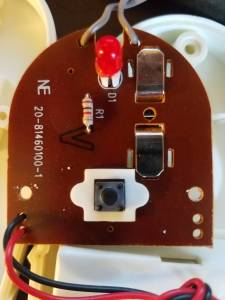 Plastic cement required.  Otherwise, extremely easy to assemble the model rocket and slide the Naboo Fighter body over it and into place just about the fins.  Some steps in the instructions were already done on my kit, and the parachute is also preassembled.

With the Naboo Fighter in place at the base of the rocket, I wasn't sure this was really going anywhere.  Advertised altitude is 330 feet, about 100 meters. Using all the stock parts, I actually used one of the two A10-3T mini-engines that was in the 20+ year old kit, along with a starter and plastic plug from the kit.  I loaded the rocket onto the pad and used the R2D2 controller with a fresh 9-volt battery.  I was surprised that could see the LED continuity light glow.  I had to hold down the launch button for a few seconds before the starter finally went.

I was surprised and pleased by the flight.  The rocket shot up with the Naboo Fighter in tow.  Granted, I was basically under it, but I was pleased, and I'm sure some kid new to the hobby would have been thrilled.

The Star Wars themed plastic chute deployed, albeit a bit tangled with the shock cord.  Although not the chute was not fully deployed, the model came down safely and intact, ready for another flight.  The Naboo Fighter itself had slid up the body tube; tape around the tube would be advised so that you still have a nice Naboo Fighter to display between flights. 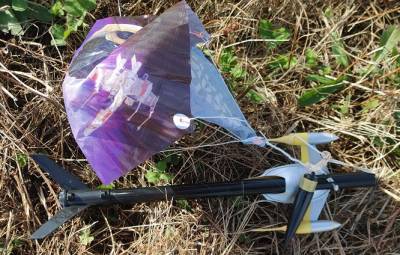 For what it was, this starter set was a nice product.  A lot of surprisingly subtle engineering, clever design, and good thought went into making things very easy to assemble and hard to get wrong by a newbie.  Certainly this was a movie tie-in gimmick, and hardly something meant to be used more than a few flights.  The only real further use after flying the Naboo Fighter might be to fly the rocket without the fighter, and maybe replacing the chute with a streamer for that.  The controller and pad are serviceable for some light use with other rockets, but too limited not to be eventually replaced.

If nothing else, this is an interesting and rather forgotten footnote in the Estes line.

I bought one of these on the cheap just to get the R2D2 launch controller. Dead right, nothing spectacular here. Pretty good rocket to fly in tight spaces, if for no other reason than you'd likely not be too torn up if it got lost. My Naboo Fighter lasted two flights. Broke a pod off on a sidewalk landing, but the rocket portion is still capable of flight. Just not much reason to fly it unless it's to boost your flight stats. ;-)