My third 4" "stubby" rocket this year became the NCR Big Brute which was built after the BSD Diablo and Yank Bullet. The Big Brute is much closer in size to the Diablo being 33.3" in length and 4" in diameter.

The Big Brute is a nice looking rocket with it's decals, black nose cone (as pictured in the catalog), four fins, and stubby design. Then the rocket touted features like laser cut plywood fins, pre-slotted airframe, interlocking through the wall fin construction and the Gorilla steel cable shock cord mount and the Gorilla-Lok motor mount. I was pleased to get a look at this Gorilla-Lok motor retainer considering I didn't get it when I purchased my Interceptor G. I'll talk about my disappointment later.

The Big Brute includes a 17" long paper, pre-slotted airframe. The plastic nose cone makes up the remaining length. There are four (4) 1/8" thick plywood fins that are pre-cut. There are also three (3) 1/4" thick plastic centering rings (slotted to accept the fins). The motor mount tube is NCR's just-smaller-than-a-29mm and it included the Gorilla-Lok retainer that slides into the lower centering ring and then turns to lock. The recovery system includes a steel cable with loop/sleeve connectors, 6' of 1/2" flat elastic and a 24" red, nylon parachute. There are two (2) 1/4" launch lugs and a decal sheet to make up the remainder of the kit. All of this is nicely protected in a box.

There is a 7-page instruction booklet of which 3 pages are the actual construction steps. The are clear illustrations to assist in building the rocket. There was also an extra loose piece of paper in my box explaining that the fins will hang below the body tube by 1/4" and if I do not want that to cut the fin slots a 1/4" so that the fins align with the bottom of the body tube. I choose not to do that.

There are two other 1/4" plastic centering rings that each are slotted for the four fins. I had to wrap a piece of tape in place in the middle of the motor tube because the centering rings fit loosely. I then slide the middle centering ring to rest on the tape while gluing. When gluing on the the bottom centering ring, I used two of the fins by sliding them into the slots to ensure the two rings were aligned properly. This is really the most critical part of construction.

Building the Gorilla recovery system including sliding the steel cable through two holes in the upper centering ring and then crimping a sleeve into place to hold it. Then making a small 1" loop at the other end using the second sleeve and then the elastic shock cord is tied to that. This connection to the centering ring appears to be very strong as the centering ring is made of 1/4" plastic.

After the motor mount is assembled and glued into the body tube, everything else goes together very quickly. The fins slide right into there slots. The slots are not sloppy so the fins actually are held in place. This is a nice set up and allowed to have perfectly aligned fins (as long as they were aligned when building the motor mount).

The two launch lugs are glued in place. The elastic shock-cord is attached to the nose cone and she's ready for finishing.

For finishing, I didn't need to use anything to fill the spirals as they were very shallow. I simple used several coats of Plasti-Kote Sandable Primer. I had to spend a little more time on the nose cone seam but still only used primer for filling. I then painted the entire rocket red (instructions suggest grey). I followed up by painting the nose cone black. Then came the decals.

The decal sheet consisted of three (3) strips, the words Big Brute and eight (8) fin decals. All were black and self-adhesive. I used the strips that go around the top of the body tube and the Big Brute name. I did not use the fin decals. I would have if they looked like the ones in the pictures on the front of the box. The decals supplied with my kit had the same shape but were much smaller. The picture on the box shows them evenly covering the fin with about a 1/4" space all the way around. The ones I had seems to leave at least a 1/2" space and not evenly around. My guess is that something changed, either the decals or the fin size. They just didn't give the look I wanted so I didn't use them.

Interestingly, my finished rocket weighed in at just under 27 ounces. The specs on this rocket says 16 ounces. I'm sure I didn't use 11 ounces of extra epoxy. I again wonder if the fins were enlarged thereby increasing the weight and making the decals not fit the same way.

Overall, for CONSTRUCTION I would rate this kit 4 points. Instructions are not the best in town, but are adequate for building this relatively easy rocket. The centering ring and fin alignment are excellent. The smaller than normal motor mount must be changed by NCR and someone should look into the weight and decals.

Here are the altitudes that Apogee's RockSim says it will get.

The Big Brute was designed to fly on NCR DarkStar motors but . . . since you can't get them any more you must fly on alternatives. Since the motor mount is slightly smaller than the standard 29mm, normal single-use motors do not fit. However, AeroTech RMS motors do. Therefore, the first flight on my Big Brute was on an F22-5J(4)*. Note the (4)* indicates that this was the delay that NAR certified. 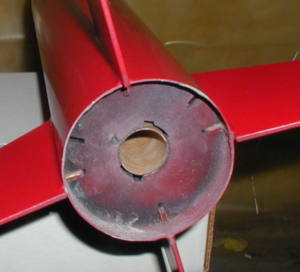 The Gorilla-Lok retainer ring is designed for handling NCR motors. I tried and tried to get it on over my AT RMS casing but could not. Finally I took a wood screw and drove it into the plastic and used a washer as a motor retainer. The plastic actually gives an easy surface to screw into and it is secure.

I had prepped everything, so I thought, so that once I was at the site I could just pop the rocket on the pad and go. Well, I loaded an ignitor at the site and popped it on the pad. After a countdown and the push of a button, the Big Brute lifted off the pad. I had angled the rod slightly to compensate for wind. The rocket took off in a slow arc and was heading down when the ejection charge popped. Upon ejection the red parachute seemed to go one way while the rest of the rocket fell. It continued that way, falling, until it landed in the tall grass. The parachute landed a good distance away. Frantically searching to see if the ejection blew the shroud lines apart or something I was only to discover that I never tied the parachute on!

No damage to the rocket as it fell horizontally and landed in tall grass. So the flight was successful, but sure would have been nice to see the descent on a parachute.

The second flight was a couple of weeks later and this time I had attached the parachute. I loaded another F22-5J(4)* and off she went. This time with no angle on the launch rod, she went straight up, arced over and started back down. It dropped about 1/3 of the way and I had started to write it off in my mind when it finally popped the ejection. Under full parachute the rocket still fell too fast.  Parachute Size Calculators suggest between a 36" and 38" chute for minimum on this weight of my Big Brute.

For FLIGHT/RECOVERY, I would rate this kit 3 ½ points. The short rocket looks nice coming off the pad. Due to it's motor limitations and the fact the provided retainer doesn't work except with NCR motors and you can't get these motors the rating for this rocket is only average. This kits parachute is under-rated for the weight of the kit.

Overall, the Big Brute is another nice looking "stubby" rocket. The parts are good quality and the through the wall fins set up is great! The instructions are adequate with illustrations. Too bad the rocket is designed to fly only on the NCR DarkStars. It forces people to modify, which kind of defeats the purpose of a kit for less experienced rocketeers. I give the kit an OVERALL rating of 4 points.