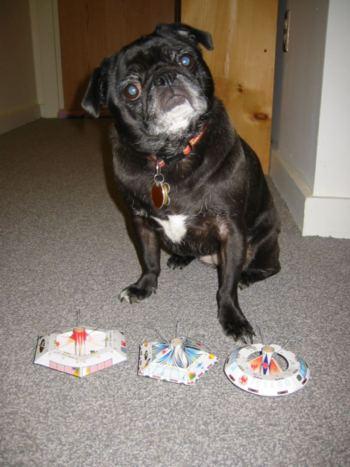 The Fliskits Triple Threat is a unique kit offering 3 small UFO rockets, each with a different shape. The UFF Persephone is circular, the UFF Athena is pentagonal, and the UFF Odysseus is hexagonal. The kits are made out of card stock and balsa, each with a 13 mm motor mount. Definitely for the experienced builder.

The instructions were quite impressive with quality instructions and illustrations. The construction includes cutting out the shrouds, scoring the paper for folds, and gluing the shrouds together to form the UFO body. The fins are made by cutting out the fin shapes out of the sticky paper. The Persephone features 3 fins, thus 6 sides. On one side, I was instructed to leave a border around the fin shape. Then all I had to do was remove the paper from the back of the adhesive and stick the fin on to the balsa sheet. After the fin paper has been "stuck" to the balsa, I simply used a straight edge and an X-acto knife to carefully cut out the fin, disposing of the extra border. Once the fins were cut, I flipped them over and "stuck" the other fin portion to the exposed balsa side. The instructions for the fins is identical for each rocket, although the Athena has 5 fins and the Odysseus has 6 fins. 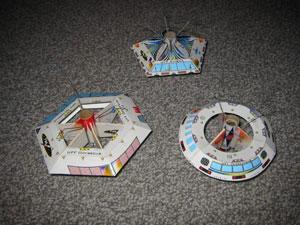 Next, I took the necessary shrouds for each rocket and glued them on the fins. On the Persephone, a smaller shroud sits inverted on top of the bigger shroud. This must be done carefully so that there is no gap between the shrouds. On the Odysseys, part of the shroud folds underneath the main shroud and fastens to the bottom of the UFO fin structure. On the Athena, there are flaired "wings" which move towards the center of the rocket and are glued on to the body tube.

Next step, the wire landing gear. Fliskits provides a guide for bending the piano wire into a specific shape. I am not an expert wire bender, but I tried to follow the shape on the first piece of wire. One important step is to place a hook at the bottom of the wire so that it can fit snuggly underneath the fin. After my first attempt at wire bending, I simply designed a simpler shape for me to bend. It looks close to the Fliskits design, but is not as complicated. I used CA glue to attach the wires, then I glued the launch lug in place using wood glue. I made sure that the fins had extra fillets as well as other parts of the rocket (where shroud meets fin, for instance). That's it. Rockets complete. Outside of cutting the balsa fins, these three rockets can be constructed while hanging out in your own living room. No sanding required!

There is no finishing required as the rocket comes with pre-printed shrouds and pre-printed fin templates. This is what I like about it. No smelly paints, no sanding. They are nice rockets to build while watching the telly. I give construction a 4, only because I think the wire configuration is unnecessarily complex and there was confusion about the motor blocks. But this would not stop me from buying another Triple Threat! 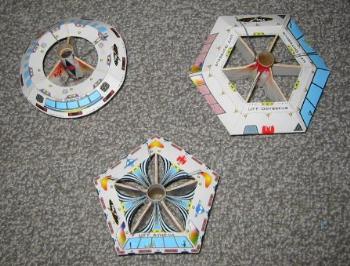 I flew the Persephone twice, once using an A10-P and once with an A10-0. On the first flight, the Persephone kind of tumbled back to the ground. On the second flight, as advertised, the rocket flips over and gently glides to the ground, landing on the wire landing gear. The Athena I flew on an A10-0 and it, too, flew very well, flipping over at apogee and "glided" to the ground. The largest rocket, the Odysseus, I also flew twice, using the A10-P and the A10-0. Both times, the rocket flew to apogee but failed to flip over. It did, however, return steadily, coming straight down as easily as it ascended. Cool!

The PRO's of the Triple Threat is the ease of flight. Simply add a little tape around the motor for friction fit, pop it in, add igniter wire and plug and you are ready for action. No folding of parachutes or stuffing the body tube with wadding. They recover so nicely and gently, the only damage these rockets should ever sustain would be a CATO or having a clumsy nephew or dog destroy/step on them. It also allows us to use the A10-P motors Estes originally released for the Blurzz Cars (not my cup of tea..)