Conversion of Lansbergen Delta II to fly on 18mm motors. The particular Delta II that I chose to model was Delta 7920-8 247, launcher of the solar observation satellite ACE. The plans are available on the Caltech web site.

The model is a 10 page PDF file. I printed the 3 pages of instructions on regular paper, the 3 sheets of boosters was printed on 65lb cardstock, and the remaining pages were printed on 110lb cardstock. For the main tubes, I used full width tabs so the body was double thickness. It turned out that BT-50 body tube was perfect for the couplers. I made an 18mm engine mount with CR2050P centering rings. The rings were spaced to exactly line up with the booster mounting holes. The body sections were joined and the motor mount was glued in. Holes were drilled through the booster mounting holes and almost through the centering rings. 18 dowels made from round toothpicks were cut to 5/8" each and glued into the booster mounting holes. The booster tubes were rolled double thickness and the holes on the booster were opened up. I poked a pin through the hole location and open them up with a round toothpick. The booster tubes were glued onto the dowels with the dowel going all the way to the opposite inside wall and glued there. The booster nose cones and exhaust nozzles were rolled and attached. Boosters 4, 5, and 6 have a larger exhaust nozzle so take care when attaching them. The main nose cone was rolled and a nose cone shoulder was rolled from double thickness 110lb stock. I made the shoulder 1" long so there would be plenty of room for nose weight. I used a standard paper shock cord mount on each end of the 36" shock cord. I used a 12" chute made from a plastic table cloth. I didn't know where the CG should be so I took an educated guess and balanced it just forward of the boosters. I then did a swing test and it turned out that it was stable at that balance point. I put a C6-5 into the mount and added enough clay to the nose to bring the balance point back to the previously determined location. It took .7oz of clay to balance which brought the all up weight to 2.0 oz. A couple of coats of clear were sprayed on and it was done. 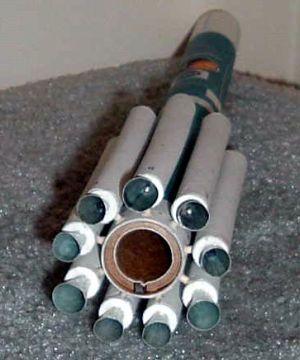 The following is a list of materials that I used in the construction.

Everything was pre-printed and only a couple coats of clear were required.

Based on the weight, I determined that an A8-3, B6-4, or C6-5 would be appropriate. The day of the first launch was as ideal a day as one could ask for: sunny blue skies, temperature in the 70's, and almost a complete lack of wind with occasional gusts to 5mph or less. I chose a B6-4 for the first flight. The motor mount has an engine hook so no tape was needed. I used "dog barf" for wadding. I was a little apprehensive because of the lack of fins but the flight was perfectly straight. The rocket was easy to follow and ejection was just about at apogee.

The recovery on the 12" chute was slightly faster than I would have liked considering all the boosters sticking out. It was flown in a corn field and it happened to hit a corn stalk upon landing and knocked one of the boosters loose. The damage was minor and was easily repaired. I didn't fix it until I got home so I could inspect all the booster attachments. The rest were all solid. I think I will switch to a 14" chute for the next flight.

I am really happy with the end result. The rocket was not difficult to build for anyone with a little cardstock modeling experience. The price was right (read: free), and when completed, you have a good representation of a rocket that is not often modeled.