Brief:
My NAR section will soon be doing a "Make and Take" session at a local museum for kids. We are limited to an extremely small launch area surrounded by lots of big, rocket eating trees. Art Applewhite was kind enough to allow us to build a bunch of his Qubits (with special artwork) for the kids. I also wanted to launch a few other things but not anything that would pain me greatly to lose. I decided to try another one of his free designs, the 13mm Six which can be downloaded for free from his site. 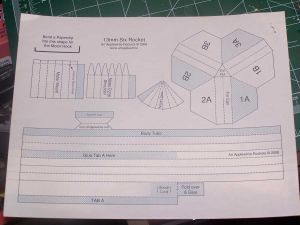 Construction:
The materials for this one consist of some cardstock on which to print out the rocket, 2 paper clips, some 1/8" tubular elastic, and, optionally, a streamer. You will need a razor knife, a steel straightedge, white glue, 5 minute epoxy and a ball point pen to put it all together.

The first step is to read through the instructions. That is always important but it is especially so here, where something out of the ordinary is being made. I'm glad I did because the first thing they said to do was to use a ballpoint pen and a straightedge to crease all of the dashed lines. The instructions further pointed out that doing so would be much easier before anything is cut out. I found this to be very true.

I did not have a fine ballpoint handy so I scrounged around and found a very small flat screwdriver I used to make the creases. I lined up the straightedge on the dotted lines and started creasing. 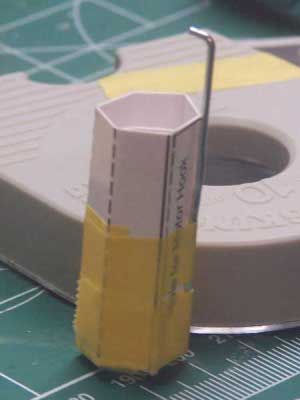 Next up was to cut out the motor mount. This was done with a razor knife and steel ruler. Once it was cut out, I folded it along the dotted lines and test fit it. Some white glue, Art recommends white for most of his rockets, was applied to the tab and it was pressed together. Art also recommends to be very sparing with the glue.

The motor mount was set aside to dry.

While the mount was drying, I fashioned the motor hook. A medium sized paper clip was straightened out, I used pliers, and then re-bent over the full sized photo in the instructions.

The fin can proved to be relatively easy to cut out with the ruler and razor combination. This is a place where it really pays to have pre-creased the dashed lines. After studying the photo in the instructions, I convinced myself that I had it folded correctly.

Getting back to the motor mount, I folded the top tabs over to form a thrust ring. The tabs were glued to each other and that with the engine hook was probably sufficient but I took another step. When it had dried, I dipped the end in some glue and set it aside to dry. Hopefully this will provide some reinforcement.

When the motor mount was dry, I poked a hole in the place indicated for the engine hook and inserted the long leg into the mount. The hook was stabilized by the addition of tape.

The fin can had been previously cut out and folded. Now it was time to put it together. The cardstock is printed on the areas where glue is to be applied. From there, it was a simple matter of folding the fins over and holding them tight until the glue dries enough to release them. I cheated by putting it in a vise to hold it. 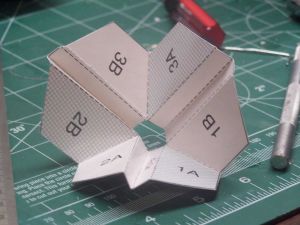 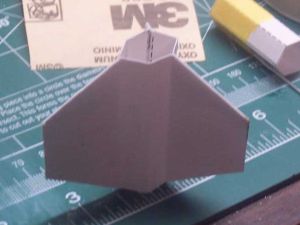 When the fin can was dry, the motor mount was test fit and I found, expectedly, that my folding skills leave something to be desired. The fit was good enough, and the mount was glued into the can with the aft end of the mount flush with the end of the fin can.

The next step was to cut out the body. This was done with a razor knife. The razor was then used to make the slits for attaching the shock cord. The instruction say to use 1/8" tubular elastic. I used Kevlar. That's just what I do. The cord was slid through the slots and knotted. Some glue was then applied and the tab was folded over to secure it. Again, I cheated by using a vise to hold it closed as it dried.

Waiting for the shock mount to dry gave me an opportunity to get started on the nose cone. It had been pre-creased and was cut out. It was folded along the lines and the tab was glued. Note that in this case, the folds are towards the printed side.

Next up was the NC base. It was similarly cut out and folded into a tube. The tabs along the top were then used to glue the base into the NC itself. 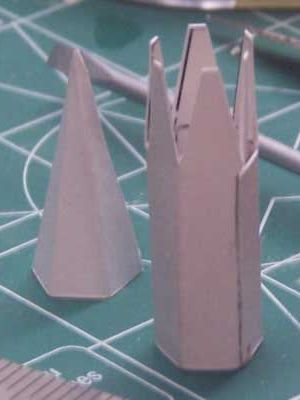 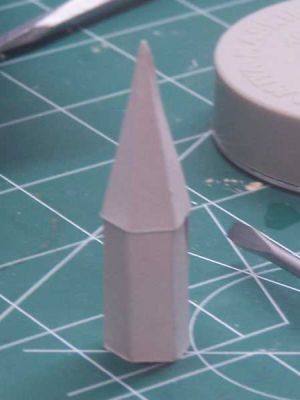 This rocket is not stable without nose weight. The weight is provided by epoxy which also serves to anchor a paper clip to serve as an attachment point for the shock cord. Note: The instruction specifically say not to use clay for the nose weight.

I whipped up a batch of 5-minute epoxy and poured it into the inverted nose cone. When it was level with the base (aft end), I stuck in a paper clip. I was amazed at the amount of heat the epoxy generated as it cured. The heat was transmitted to the paper clip and I got burned!

Putting together the main body tube is probably the most difficult part of building the Six. The most important thing to do is to go slowly and carefully making sure that the folds are straight and sharp.

The first thing to do to the body tube is to make all the folds along the dashed lines. Creasing ahead of time helps dramatically. All of the folds, except for those on the launch lug, are made towards the printed side so that the outside will be a pristine white. 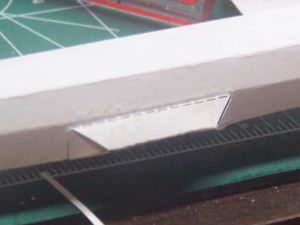 The launch lug is folded in the opposite direction. The sections are folded so as to produce a triangular prism. The tabs of the prism is then glued to the BT.

The rest of the BT is glued in 2 stages. The rocket is 6-sided but counting reveals that there are more than 6 panels to deal with. The first few extend only as far as the shock cord mount and my supposition is that they are to add stiffness during boost. This part is folded over and glued first. Make sure that the seam is a good one and is pressed down for its entire length. Also make sure it is straight and lines up with the appropriate dashed line. The glue tab is indicated by a cross-hatched area.

When the first seam has dried enough, the rest of the rocket is folded over to make the six sided tube. In this case it is ever more important to make sure that the tab is pressed flat and straight for its entire length. I ran a very long screwdriver through the length of the BT and used it to press the seam flat.

When the BT was strong enough to resist coming apart when messed with, I test fit it into the fin can. It slides in the top and gets seated on top of the motor mount. I found the I had been a little sloppy in the construction of my fin can and the fit was not as tight as I would have liked. The same thing happened when inserting the motor mount. I thought it would work but it could have been better.

The BT was glued in with white glue and then checked continuously from all sides to make sure that it was straight. Eventually, the glue set up enough to let it set up the rest of the way unsupported.

The instructions recommend wicking some thin CA into the forward end of the BT to lend strength. I did this and am glad I did. After the CA dried, I test fit the NC and found it to be just a little bit tight. A small amount of sanding took care of this but I am glad for the extra strength of the CA.

CONs: Not really a con but it takes more skill and time than many of Art's other freebies. I enjoyed building it.

Finishing:
Strictly speaking, there is no finishing that needs to take place on this rocket. Most people who do finish it in some way probably resort to magic markers. I decided to go ahead and paint mine. The added weight will actually be a benefit in the field where I plan to fly it in a demo.

To start things off, I gave it a light dusting of Kilz. This was mainly to cover up the thumb smudges and the writing on the rocket. Being white, this did not make it look much different than the bare rocket.

I gave the primed rocket a cursory wipe with sandpaper, mostly to remove the gritty texture left by the Kilz. I then sprayed with purple Rustoleum and that about does it.

PROs: Many options for indiviuality

Flight:
This was for a demo at a kid's make and take event at the local museum. The kids had been making Applewhite Qubits and I wanted to give them a contrast with some more "traditional" rockets. I wanted to show this one on a 1/4A3-3T vs a Qubit on an A10-PT. This one did go higher but the ejection charge blew out the motor and the NC never ejected. It lawn darted into some flagstone pushing the NC back well past the BT shoulder. It probably could be repaired but it will be simpler to make a new one.

The flight was good and straight. It was impressive for a 1/4A.

CONs: motor retention (I would use tape if I built it again.)

Recovery:
This one could be very easy to recover with a streamer. I elected to just do the nose-blow thing. As it turns out, it was a moot point.

Summary:
This is a nice, good performing traditional rocket and it's free. It takes a little more time than some of Art's other rockets, but it is worth the effort. I will probably build one again some time.