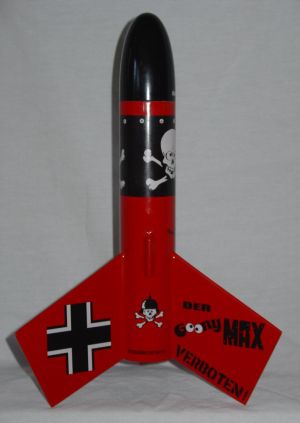 Brief:
The Goony Max is one of Excelsior Rocketry's "Goony Retro-Bash" line of decal/plan sets. Fred Talasco at Excelsior has created a line of kit bashes that are a throwback to the old Estes "Goonybirds". Fred's designs are based on old Estes kits (in this case the Red Max), and some original ideas which all use the Estes Baby Bertha as the starting point, although there is now a "Fat Max" version.

Construction:
My Goony Max plans arrived from Excelsior in a sturdy priority mail envelope with extra cardboard inserts to keep everything well protected. Included in each "Goony" plan are the instructions and fin templates printed on a single sheet of cardstock with a nice color picture of the finished rocket, and of course, the decal sheet, which is the best part of the whole deal. The instructions and decals were packaged in a sturdy plastic sheet protector as are all the decals that Excelsior ships. The builder must supply the other half of the project which consists of one Estes Baby Bertha kit and some balsa sheet stock for cutting out the new fins. 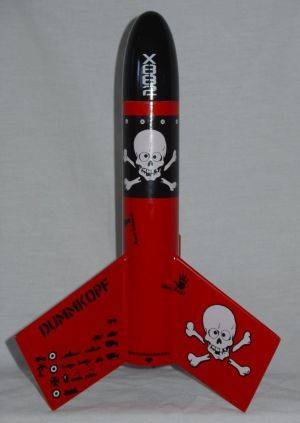 The G-Max was one of several goony plan sets I ordered from Excelsior and the third one I actually built. The provided instructions are actually a list of "exceptions" and are meant to be used in conjunction with the regular Baby Bertha instructions. The Baby Bertha is an easy kit to build, made only a little more challenging by having to trace out and cut a new set of fins. Of the Goonies I have built so far, this was the simplest.

The motor mount was assembled first and I upgraded the recovery system as I do with all my rockets by adding a length of Kevlar cord which was tied around the engine mount, threaded through the forward centering ring, and glued in place. The motor mount was installed in the body tube, and per the G-Max notes, pushed forward until the end of the engine hook is even with the end of the body tube. This puts the motor mount about 3/4" further forward than normal, providing better stability.

While the motor mount glue was drying, I traced and cut out the fins, which take the place of the standard Baby Bertha fins. These were match sanded, and in keeping with the stout/blunt theme of the rocket, I left all the fin edges squared off. The Goony notes instruct you to mark the body tube for three fins instead of four, but there is no further explanation of how to go about this. It is left up to the builder to figure out how to mark the fin positions. I decided to use the stock Estes tube marking wrap, and simply measured out the spacing for 3 fins. My standard routine for attaching fins is to tack them on with wood glue, add a second wood glue fillet, and then a final fillet of Elmer's Wood Filler. The launch lug is attached in the same fashion. With the fun part over, it was time for finishing.

Finishing:
The Goony Max has a simple paint scheme, a red rocket and black nose cone. The fins were coated with thinned down Elmer's Wood Filler and sanded smooth. Next came two coats of Rustoleum Painter's Touch Sandable Primer, followed by two coats of Krylon spray enamel. The plastic nose cone was finished with the same paint routine. 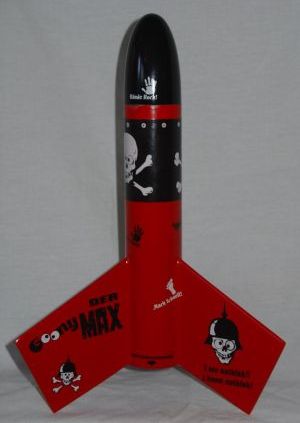 What really makes this rocket cool are the decals. As with all of Excelsior's products, the sharpness and detail is awesome. The initial G-Max kit was sold with a giant selection of decals, a full 8½ x 11 sheet worth, providing many different options for the final look of this rocket. There are actually enough decals to reasonably finish two of these kits, although Excelsior has since scaled back the G-Max decal sheet in order to reduce the price. When you get decals from Excelsior they come with a full page of instructions for prepping, applying, and finishing. They also recommend Microscale brand products, Decal-Set and Micro-Sol, for accomplishing the job. I haven't tried any of Microscale's products, having had excellent results with Testor's Gloss-Cote #1216. First I gave the decal sheet 2 light coats of Gloss-Cote. Next the decals were cut out and applied with the standard warm water dip, slide into place and blot dry routine. Excelsior's decals are a pleasure to work with and have just the right amount of thickness and tackiness. I used most of the decals on the sheet and overall, I'm glad I got the "full scale" version. After the decals had completely dried, I added a final spray of Gloss-Cote to the whole rocket. The finished product looks awesome and the Gloss-Cote plays nice with both the paint and the decals.

I finished up the recovery system by attaching the elastic shock cord to the Kevlar cord and nose cone, then putting a drop of CA glue on all the knots. The 12" Estes parachute comes pre-assembled, and I added a fishing swivel for easy attach/remove and less tangling. Now for some nice weather...

Flight:
My Goony Max has flow a total of three times so far, on three different days with varying amounts of wind. Recommended motors are the standard A8-3, B6-4 and C6-5. I couldn't find any published weight or CP for this kit, but my finished G-Max weighed in at 1.6oz. Flight preparation is standard. With a BT-60 body tube, I use a 4"x4" Nomex heat shield looped onto the Kevlar anchor cord. Even with the forward position of the engine mount, there is still enough room, for the heat shield and parachute to fit comfortably. Motor retention is via the standard beefy Estes hook, and even with the forward position of the engine mount, I had no trouble installing motors or igniters. The G-Max has flow twice on B6-4s and once on a C6-5, and even participated in a mass Goony Max launch with two of it's brothers. (Bill, it only counts as a drag race if you launch them all at the same time!) The fins on the G-Max are quite large so the rocket will weathercock a bit, but nothing too severe. 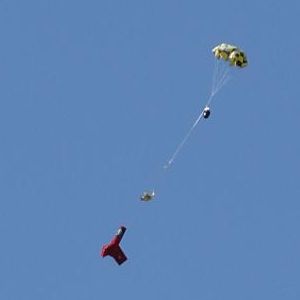 Recovery:
Since all three flights were launched in some sort of appreciable wind, the rocket tracked into the wind, and was arcing over at apogee. Ejection was pretty much right at apogee with both B6-4 and C6-5 motors. All three flights had good deployments and the standard 12" Estes chute brought the G-Max down nice and easy. All three flights landed in tall grass and weeds with zero damage. I have had a curious result on two of the flights, with the Kevlar shock cord coming back with one or more strands cut. After the second time, as I was taking the Nomex heat shield off, I noticed that the Kevlar cord was stuck in the grommet of the heat shield. Closer inspection revealed that the grommet had been pinched when it was installed, creating a very sharp edge on the inside. Problem solved, but now I've got two ugly looking splices in my recovery system. Like all good goony birds, the G-Max is not a "scream of the pad, rip a hole in the sky" kind of rocket, but it is deceptively quick and will get some respectable altitude with a C engine.

Summary:
Excelsior's line of "Retro Bash Kits" is a great throwback to the old Estes "Goony Birds", either for those who thought they were cool then, or for people like me who think they are cool now. They are fun to build, bring to the range, fly, and talk about. Everyone needs at least one Goony in their lineup!

PROs: The G-Max is one of the simplest of the Goonies to build, and the decals are a great throwback to the days before political correctness made people stupid.

CONs: Lack of a three fin marking template. I can't comment on the new decal sheet that comes with this kit, but the one I got was awesome! More decals = better!