Brief:
The Honest Goon is another great idea from Fred at Excelsior rockets. It is a modest downscale of the larger kits that are out there and comes with an outstanding set of decals. Remember though, they are GOONY! If you have never done an Excelsior goony, you really need to get one! These are fun builds, mostly easy and finish up looking wonderful. They also fly with the best of the rockets out there!

Construction:
The components are a simple lot consisting of:

I have a modest supply of tubing and a good bunch of regular Baby Bertha nosecones on hand but of course this one needed a special nose of its own. After rummaging around the balsa parts I had, I actually was suprised to find the exact nosecone and transition I needed. A quick email to Fred, the build sheet and decals were at my door in less than a week. The entire build sheet is on one side of a regular 8.5 x 11 piece of paper with the full size fin pattern as well. You will need the Bertha instructions for the motor mount assembly unless you have built a few already, as I have.

Starting with the motor mount, the motor hook was fitted to a 3" piece of BT-20 with a few wraps of 1/2" masking tape to hold it in place. Two CR-2060 rings were then glued to the BT-20. The upper one was about 1/4" from the front of the tube and the rear most one was attached 1/4" from the bottom as well. Don't forget the engine hook notch!

At this time I made a small hole in the upper CR and threaded a piece of 70# Kevlar® thread through it and wound the thread one time around the motor tube. A good fillet of wood glue was used to anchor it to the underside of the CR. Once all the glue is dry, the mount was dry fitted to the body tube at the recommended mounting point and the front of the Kevlar® thread was formed into a small loop that was just inside the front of the body tube. The 30" long piece of 1/8" elastic was tied to the Kevlar® at the loop which makes for a strong, fairly heat proof shock cord with the elastic, not the thin Kevlar®, at the end of the body tube. This method helps to reduce any zippering that might occur.

Next up was the nosecone assembly. This is where the actual Honest John nose shape is so very cleverly formed!! The BT-70 nosecone and transition are joined together with the short piece of BT-70 tubing. The shoulders of both pieces will have to be trimmed down to fit them together with the BT-70 tube between them. Glue the three pieces together once fitted properly, with wood glue and set the assembly aside. Since the shoulders of both pieces will be very short, take care that the whole thing is setting up without sagging. I stood mine up in another piece of tubing to dry. This is now the full nosecone and it looks fabulous!!

The fins are very simple to lay out and cut from the balsa, just make sure you have the grain running in the proper direction and that you make four of them, not three per the Baby Bertha instructions! I sanded mine very slightly on the leading edge to round them a bit. Using a four fin locating pattern from VPC, the main body tube was marked and the fins glued on. Using a double glue joint is really needed here for retention insurance, as the fins are set back 1/2" past the bottom of the main body tube. This helps move the CP rearward.

The motor mount was glued in place next, taking care to put the shock cord through the motor tube and out of the way. The motor mount needs to be pushed all the way in so that the engine hook is flush with the bottom of the body tube! This helps to move a little of its weight forward, helping with the CG location. Once you have the glue in place, push the mount in quickly without hesitation or it will grab too soon and be too far back!

Add the screw eye to the "nosecone", pull the shock cord though the body and attach it to the screw eye. Add your favorite chute, mine was a 15" shiny Mylar® type with a snap swivel and you are almost done.

The instructions have you add a small piece of 1/8" launch lug to the BT-70 piece of tubing on the nose cone and another in line with it on one fin. I was not too happy with this as I think that launch lugs that are placed away from the body tube tend to bind on the rod as the rocket moves around at launch. Also, the nosecone can twist on the body tube, which could cause the two lugs to become misaligned! However, I was willing to try it on this one and it did work ok. However after the first flight, although nothing was wrong, I made two standoffs of balsa to mount the lugs on which also work just fine. Besides, I think they actually look better!

Finishing is straight forward, using your favorite balsa filler on the nosecone and fins. After a few coats of balsa filler coat, thickened with a little bit of micro balloons, it was primed with Walmart (cheep) gray and sanded to get most of the grain and spirals out. It is goony after all and I really didn't want to spend a bunch of time making it a museum piece. They only problem I ran into was what color to paint it! After a few days of running a bunch of colors through my head, yes I remembered to rinse each one out before considering the next, I suddenly remembered this was a goony! Next thing you know, the color pink jumps out at me and the dye was cast, or something! I had some Krylon® H20 I wanted to try in pink and on it went!

A few words of caution here!! If you have been using regular Krylon®, as I have, the H20 stuff is completely different! There is a considerable amount of over spray that will get on everything and it is much heavier as it goes on. My first coat was way too thick and I had to let it dry for a few days so I could sand the runs out! It looks like crap as it goes on but it does flow out nicely and really dries to a great shine!! I found out a few days later that the paint got onto my watch and one of my cars that was 20' away on the driveway! So spray with plenty of open space to do so.

The paint was dry two days later and the decals were next. Fred makes some of the best ones around but you HAVE to follow his directions to use them! I coated mine with Microsolve Decal Film per instructions and that thickens them up to withstand the handling they will get. You still have to be very light handed and NO rubbing the water out. Blot only! Two days later, I coated the whole thing with some Future and it was some beautiful Goony! The black decals show up great on the pink and everyone who has seen it so far have had nothing but good things to say about it. Of course, we all know what they are saying when I am not around!!!!

I give the construction and finishing of this bird a solid 5. 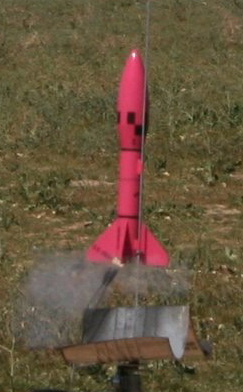 Flight:
Recommended motors are for the Baby Bertha so you have to decide exactly what you want to try for this new configuration. Since the rocket was still light in weight and felt nose heavy, as it should, I went with an Estes A8-3 for the first shot.

You do need to be careful with packing as there is not that much room for all that shock cord and the chute. Three pieces of wadding was placed in the body tube with another small piece put into the front of the motor. Liftoff was nice and straight with a nice twist going up just like the real one did and the chute came out right at nose down position. The 15" size was very good with little drift and a damage free landing. After this flight I changed the launch lug arrangement as I said and did the painting as well.

The next flight was at our open range and a C6-5 was used with another great flight although it did get way up there! It was so fast off the pad that our great photographer didn't get the shot! I loaded up a B6-4 for another flight and the photo shoot went well and so did the rocket. 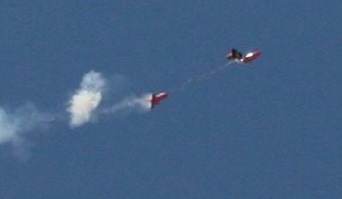 This one gets a solid 5 for great flights on A to C motors and is just fun to fly period!

Summary:
Pro's: Excelsior has a great line with his Goony's, they are easy to build, finish up in no time and really stand out on the range with their wonderful decals. Con's: None unless you consider the amount of engines you will be burning up having a flying fun time with it.