Brief:
This review describes a plastic model conversion for Lindberg's 1/48 scale Douglas X3 Stiletto. I attempted this project for the 2006 EMRR Challenge and saved it until nearly last because I thought it would be an especially difficult project, however, it turned out to be a cinch even though it's a cluster! My finished rocket is 15.5" long and weighs 2.5oz empty.

Modifications:
Cut two 1 5/8 inch segments of BT-5 tube. Install an engine block (e.g., cut from spent casings) flush with an end of each tube. Widen the rear jet holes in the fuselage so that a 13mm motor slides very easily through each hole but does not rattle. Sand off plastic lumps in the interior floor of the fuselage halves by the rear jet holes. Insert a 13mm motor in each BT-5 tube, and glue one tube inside each fuselage half so that the exposed motor extends outside the fuselage and the tubes are flush with the jet holes. Make sure that the tube does not lay above the centerline of the fuselage. This can be ensured by laying a flat heavy object across the fuselage edges above the tube. When dry, remove the motors and add interior filleting to make a tight seal. Further, use a few scrap chunks of plastic to glue two or more braces to firmly attach each tube at several points inside the fuselage.

If you choose, assemble the seat and pilot. Glue him in place. [Note: the pilot interferes with recovery devices.] If you are keen on a parachute, you might omit him. I thought a pilot would be much more fun than a successful recovery, so I included him and painted him elaborately.

Plug the engine intakes with balsa scraps. Install the windows. Assemble the nose cone. Glue on the landing gear doors.

Add 0.5oz nose weight inside the nose cone. When finished and loaded, my model had a CG at the forward edge of the main wing root.

Cut away the central portion of the main wing. This provides a bit more space inside the fuselage for the engine tubes and prevents melting. Glue each wing half into the corresponding fuselage half.

Use small wheels or other scrap plastic as anchors for gluing Kevlarthread into nose cone and fuselage. This will be the basis of the recovery system.

Insert the tail (stabilizer) and glue the fuselage halves together. When dry, glue on the remaining hatch covers and plug any cracks/holes in the body including the display stand hole. Discard the remaining plastic parts (mostly the landing gear and guts of the plane).

For recovery, I made a 14" mylar chute from a camping "space blanket" but found it to be too big for the available space. (My pilot was flying this jet!) See below for another recovery option or invent your own. 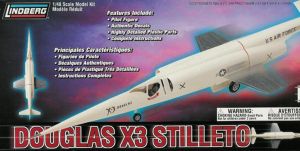 Construction:
Aside from the plastic model kit itself (with the "Stiletto" amusingly misspelled on the box), you need a small amount of BT-5 tubing and a small recovery system (but see later). Some plastic model glue helps along with CA.

Finishing:
Paint as you wish. I used all the waterslide decals, and oversprayed with clear Walmart paint.

Flight:
For flight, I loaded up two A10-3T motors and friction fit them with masking tape. Only one motor lit on our first flight and the rocket limped off the pad. The ejection charge was not nearly adequate to push out the mylar chute crammed at the pilot's feet. It was a pretty disappointing first attempt.

For the second try, I decided to go with tumble recovery. I cut away the chute. Next, I tore away the orange streamer/flag on the eye protection device Estes provides to cap your launch rod. I tied this 5" x 0.5" "streamer" in place of the parachute. Now the recovery system fit easily, but it was essentially tumble/impact-based recovery. With two A10-3T motors both lighting, the jet screamed to a respectable height of several hundred feet (wRASP says 300'). Amazingly, it was unblemished on impact...I mean "landing".

For the third flight, I loosely fit the motors so they would eject at apogee, like the Estes Mosquito. Again with two A10-3T motors, we got a very satisfying flight and a flawless, undamaged recovery of the jet after removing it from its small impact crater. However, the pilot complained that it was a rather hard landing.

Summary:
This kit was a very easy introduction to plastic model conversion except for the recovery system. A fancy approach with an interior tube and a full parachute could be devised, however, my tumble/impact recovery seemed perfectly adequate for this lightweight model. The model seems sturdy enough to endure many such flights. With its 2 x A10-3T cluster configuration, it is surprisingly fun to fly.