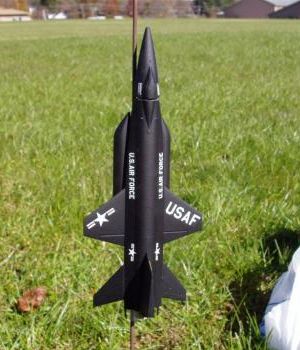 Brief:
This is a plastic model conversion of a Revell X-15 kit.

Modifications:
The first thing I did was use a Dremel to grind out the wheel well in the bottom half of the X-15. This makes room for the nose cone. After removing the wheel well, I epoxied the nose cone/body tube in the lower shell. There were some gaps along the body tube side where the plastic wasn't touching. To reinforce this area, I cut some strips from the frame which holds the plastic parts for the model. I wedged them along the side of the tube and used airplane glue to weld them to the shell. Then I painted epoxy over that and along the tube where the strips touched. I assembled the rest of the plane per instructions only leaving out parts which would not fit. In this case, it was only the little man inside the canopy. There were two versions to build. I chose the one without the wheels. The smaller lower fins needed to be reinforced. I used some flat strips of styrene scrap from the kit and welded it in with airplane glue, following with epoxy. Then I wrapped m asking tape along the point where I needed to cut the nose off and used an extra fine razor saw to remove the piece just above the nose cone. I made a tiny tri-fold shock cord and glued it in the tube. I recommend doing this beforehand as it was a pain to get in. I also packed some clay in and around the nosecone. I wasn't sure about gauging CP. I probably should have made a cardboard cutout. I chose to place the CG about 1/4 inch forward of the leading wing edge. 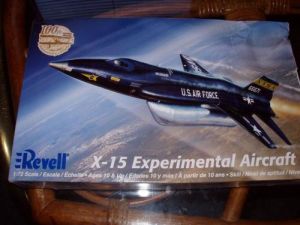 Finishing:
I painted the X-15 flat black and applied the waterslide decals.

Flight:
It was very windy on the day I flew this, and I think that contributed to the inconsistent results. I flew the X-15 three times, all on A10-3T motors. The first flight was very straight. The second was mostly straight but a little squirrelly near apogee. The third flight was very unstable, was waffling around sideways, and landed before motor ejection. There was no damage from one flight to the next. I think either the rocket was marginally stable and/or the wind caused some problems. 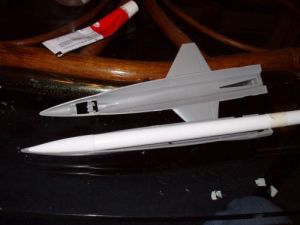 Recovery:
I used a short polyethylene streamer which didn't help much for slowing the descent. It was about the only thing I had which would fit in the 13mm tube. The X-15 was durable enough to take hard landings in grass without any damage.

Summary:
This was my first attempt at a plastic model conversion. Actually I did start a plastic model Jedi Starfighter, but abandoned the idea. I was pleased with the results of the X-15, but I don't think this is something I would do often.