Brief:
This is a single-stage sport-scale model of a conceptual heavy lifting NASA vehicle. It features beautiful, highly-detailed wraps and is quite striking when completed.

John:
This unusual rocket had some fit issues that aren't inconsistent with other Quest kits I've assembled. The instructions are fantastic, well thought out and illustrated, as we expect from Quest.

Ray:
I did not experience the any fit issues, but was short the Fin Core Sheet so I had to improvise. I do 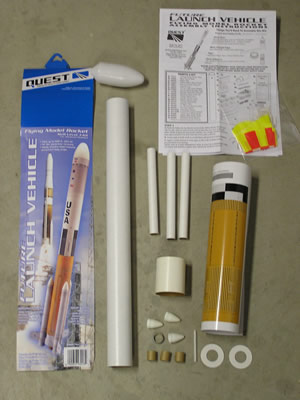 agree with John the instructions are very good.

John:
The rocket features three 'booster' pods spaced equally around the 40mm tube. These have the appearance of SRBs from the Space Shuttle. The tubes are attached with white glue to the main body tube.

My main areas of construction difficulty centered around the motor mount and the fin attachment.

Ray:
Here is another area where John and I differ a bit. I didn’t have any issues with the motor mount or fin attachment. I had more trouble with the body wraps but this might be just a lack of experience.

John:
The most unusual aspect of the kit, in my opinion, is the lack of any balsa components. The fins are a 'composite' set up composed of a fairly thin core of cardstock and two printed 'wraps' for either side. This creates a rigid but thin fin. These fins are glued with a butt joint to each of the three booster tubes, directly to the wraps.

The surface area of the joint is tiny, and I had my concerns about the fin strength. I would suggest using a tab-slot arrangement for the fin mount, instead of the butt joint. This would take some pre-planning however to cut the tabs while the fins are cut from the core material. 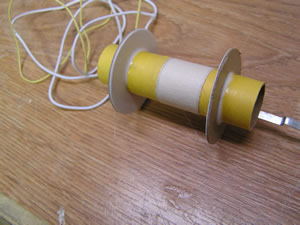 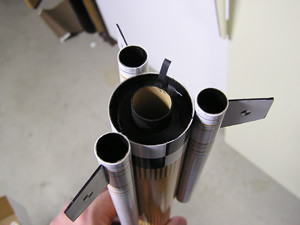 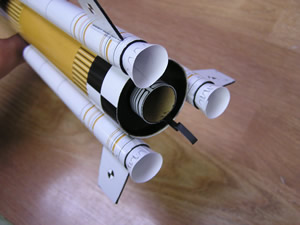 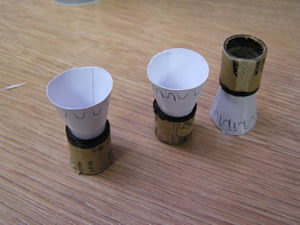 Ray:
John has a great suggestion here. I would highly recommend attaching the fins in some other manner than the butt joint suggested.

John:
The other construction issue I had was a loose motor mount. The centering rings were just a hair too small for a solid fit in the main tube. Nothing hard to fix, but it was a small hiccup in the building process.

Construction Rating: 4½ out of 5

Ray:
As I mentioned, thankful I did not experience the issues John did with the motor mount. 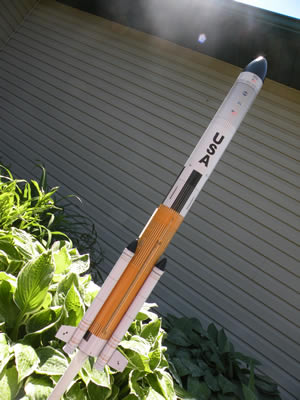 Finishing of the rocket is really a part of the construction stage, as the vast majority of the rocket surface is covered by the beautiful pre-printed wraps. The printing on the wraps is outstanding and has the appearance of 3D details.

This was my first attempt at body-wraps, so it was certainly a learning experience. The instructions call for the wraps to be sprayed with spray adhesive prior to installing them. I chose to work with white glue. The glue worked fine for the smaller wraps- the fin laminates and the engine bells. It was not a perfect solution for the main body and boosters.

The wraps are high gloss paper, not unlike a magazine cover. This material made it difficult to apply the white glue. The method I used was to spread a very thin layer of glue along the edges of the wraps, about 1/2" in width. I then slowly applied the wrap to the guidelines and smoothed it out as I went. The main tube was easier than the boosters, but even the main tube had some wrinkling and other issues near the seams.

The booster wraps were very tricky, as the 13mm tubing was harder to work with. I had issues with the wrap pulling away as I was applying it around. In retrospect, I should have pre-curled the wrap more prior to application.

The only painting I did was an optional coat of black to the nose cone and the cones on the boosters. The effect was nice, and matched the catalog image. If you choose to leave the cones white, no painting is required at all! Also, with the wraps and paper fins, there's no need for filling or sanding!

Despite the challenges, this was one of the fastest rockets I'd ever worked on.

Ray:
I really like the visual appearance of this rocket also. The body wraps provide exceptional details that would only be captured in some of the best scale models.

This was also my first attempt at applying body wraps, I chose to follow the directions more closely than John did and used spray adhesive. The spray adhesive gives you one chance to get the wrap in place correctly. I found that the wraps overlapped slightly which required additional trimming and fitting. After some time I was able to get the wraps to nicely. Once I was satisfied with the fit, I sprayed the back of the wrap, aligned the edge of the wrap and applied the edge to the line on the tube. I slowly rolled the wrap around the tube. Once in place I used blue painters tape to hold the seam securely together.

As John did, I also painted the nose cones with gloss black adds a nice contrast. Although the wraps were a challenge it was nice not to have fill and sand the tube repeatable to get a good appearance. Essentially, apply the wrap and you are ready to fly.

As I was building this rocket, I attempted to follow the instructions exactly; however, I could not help myself when it came to booster. It seemed this was a perfect opportunity to make this a cluster rocket. I formed the engine cones and attached them to a used A3-4T engine tube that I cut into 3 equal length sections. I applied some tape to around the outside of the engine tube to make it a pretty tight fit so I could fly the rocket with the engine cones. When flying as a cluster I remove the engine cones and replace them with 3 engines, applying tape around the outside of the engine until they are a tight fit. Lastly, I doubled the amount of clay I added to the nose cone to ensure a stable flight as a cluster.

Flight & Recovery:
John:
My first and only flight was on a B6-4. I used 6 squares of wadding which was plenty to protect the Rocketchutes 12" nylon chute I used. It flew straight and true, but landed in a tree. I was only able to recover it a few pieces at a time. 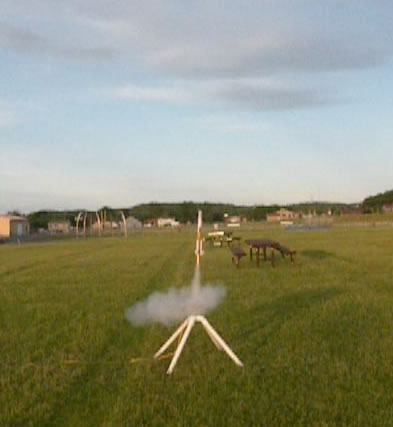 I had much better luck than John did. My first flight was a C6-3. I used dog barf in place of wadding and the stock parachute. The rocket accelerated nice and straight with good ejection and parachute. I found that one for the fins broke off and needed to be placed. The second and third flight occurred about a month later first one on a C6-3 and the third was a C6-5 and 3 A3-4T’s. The cluster launch was awesome, the rocket made one or two twisted under boost exactly as I image any large rocket should. The parachute ejected just after the 3 booster engines ejected – very cool effect – I just wish I was able to video tape it. Maybe on the next launch.

John:
The shock cord mount is standard Quest fare- Kevlar to elastic and attached at the engine mount.

As mentioned above, I upgraded the stock parachute.

Had the rocket not ended up in a tree, I would anticipate a mostly successful recovery. However, I was anxious about the fin strength.

Ray:
In my opinion this is a great rocket – challenge to build, very nice appearance and allows one to push the envelope if you to chose to. I agree with John with the overall rating of 4.5. Great Job --- Quest!!!!

And John maybe the Rocket Gods (see John's pictures below) will answer your prayers with a new kit in the mail. 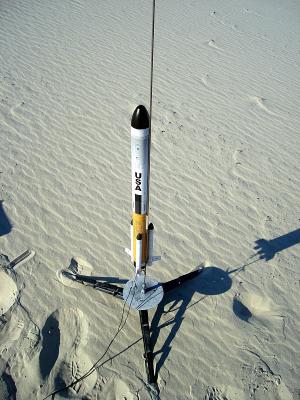 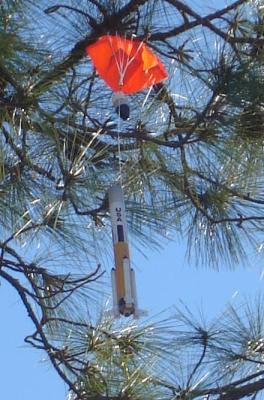