The body tube had some of the deepest, ugliest spirals I've seen and very poor white glassine top layer. After filling the spirals with Elmer's Fill 'n' Finish, I started to sand the tube down. This caused the edges of the tube started to peel up and the surface started to get a roughed up "orange peel" look. The decals on the other hand, were excellent quality and the white comes through very strongly, even on the gloss black surface.

The instructions were fairly well written along with plenty of good illustrations. Overall, the skill level on a 5 scale was in my opinion, accurately listed as a 2. I did find one very glaring error in the instructions though: the tube marking guide has the wrong lines for mounting the fins. There are 4 fin lines which are supposed to be set at 90-degree rotation points. The marking guide has 4 fin lines but spaced as though there were 5 (72-degree rotation points). This is easy to correct: just fold the guide into fourths and mark where the folds are, not where the printed fin lines are. 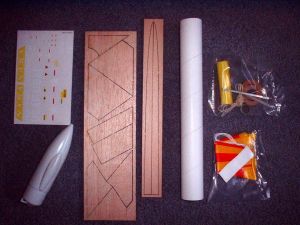 Motor mount construction is the basic tube/engine block/centering rings/hook found in most kits. Quest is one of those companies that is kind enough to include Kevlar® for the bottom of the shock cord. The Kevlar line is attached to the motor mount.

Fin prep and mounting for this kit is a bit tricky, which is why this rates as a skill level 2. The instructions offer a good tip for ensuring a better bond along with wings and tails getting slight bevels sanded on their roots. Of course, 10 degree and 28 degree bevels are only theoretical targets for most of us, as I certainly am not that precise in my sanding. Still this helps get more of the fin root actually touching the tube come time to bond.

There are a lot of fins to bond with this kit. You start with two strakes that run the length of the body tube. Next comes rudders for the top and bottom. Follow up by attaching wings flush to the strakes, which explains the beveled root. These are not perpendicular to the body tube at this point. Last comes the tails, which are mounted at roughly 45 degree angles to the wing. The alignment is aided by a laser cut balsa piece that rests against the body tube and holds the correct angle. For all of my fins, I tacked them on with CA, then followed up with wood glue fillets. Note: wait on the fillets until everything is tacked on. This is especially important with the strakes, as you don't want fillets to get in the way of the wing and tail bond joints.

The nose cone is then attached to the elastic shock cord and construction is done.

Finishing:
The finishing on this had good and bad news. The good news is that the paint scheme is pretty simple: the whole thing gets gloss black. The bad news is that there's a lot of work involved if you want to eliminate the spirals and balsa grain. I've already griped about the tube spirals. The balsa fins and wings were good quality but because there are so many of them, filling and prepping for paint was a lot of work.

I allowed the paint to cure for a full 4 days, very worried that the decals would not show up or contrast very well against the dark surface. For the most part, the whites and even the yellows are very visible. I was pleased with the results. There were a couple of small red lettering decals that seemed to disappear against the black surface though. Overall, I think the decals make for exceptional detailing and styling for this kit.

Flight:
First flight was with a B6-4 on a windy day. I was worried that with such large wings/fins, this kit might have trouble going up against heavy winds.

The B6-4 was plenty of power for it, but it definitely lost ground to the wind. It held a straight path even though it was pushed back about 10-15 yards in flight. The 4 second delay was a bit late but that may be fine in less windy conditions.

I did not get a chance to move up to a C but will definitely try that on its next flight. It can clearly handle it since the B barely covered 300 feet, nowhere near the spec'd 450'.

Recovery:
The 12" chute worked fine and the elastic/Kevlar lines showed no signs of wear. There was no damage whatsoever to this despite drifting at least 20 yards in the grass after landing.

Summary:
I'm generally not too impressed with the big commercial mass market offerings, but this one is pretty sharp. I especially liked the decals, which are tremendously better than the peel 'n' stick stuff you'll find flanking this kit at the big chain hobby stores.

Hi, there is nothing 'futuristic' about this plane. The X-15 is one of the x-planes and is a rocketplane that has made record setting flights. Take a look at: http://www.hq.nasa.gov/office/pao/History/x15/cover.html and http://www.dfrc.nasa.gov/Gallery/Photo/X-15/

I'm currently working on this model and I find the BT is of poor quality as compared to other kits I have built in the past. Anyway I decided to add epoxy clay to all the fins and wings--basically all the seams... I filed the clay down after it hardened and then I sanded until the seams are like glass. I find the wet/dry 400 grit works great for this. I also coated the entire model with Elmer's Wood Filler. I know it sounds like a lot of sanding, but I have built other rockets this way and the finish is unreal. The fins when prepped right looks like they are molded to the BT, which is what I want to achieve. I've been using TESTORS #1237 Flat gray primer and #1247 Gloss Black. I'm very happy with the results, but the paint is very expensive--$3.99 to $4.50 for a 3oz can! I know that others use Krylon and different brands but have been reluctant to try it. Some one tipped me off and said that the $1 Wal-Mart brand paint works pretty good? I have some extra BTs I can practice on.

Yes, the X-15 is certianly part of history. My X-15 kit must have been a newer version. I suspect Quest had some serious complaints about the stability of this design, and made some changes: First, the body tube is about 2 or 3 inches longer than the balsa fin strakes supplied. Also included in the kit is a clump of clay, with instructions to use this in the nosecone (although I'll probably glue weights in there instead). Also, (and this is rather odd) a seperate piece of paper that clearly states to only fly this model on a B-impulse motor, which doesn't agree with the instructions or the kit card. But of course after string-stability testing and adjusting the noseweight, I'll be brave enough to use C6's and maybe an A8 if the model ends up light enough. I'm not new at this! I imagine the extra propellent weight of the C-impulse motors puts the CG behind the CP, so to compensate the designers lengthened the body and added a noseweight to make this stable on a B weight motor. I know many of you out there don't bother to balance the models, but I always do.

Unlike the reviewer's kit, I found my body tube to be quite smooth, and does not appear to need any filling in of the spirals.  One thing I disagree with and changed on my model: The instructions state to place the motor mount clip opposite the launch lug.  I instead prefer the metal clip and launch lug to remain on the same back-side of the rocket to make it easier to attach the ingitor clips without the interference. Call me a rebel.

Granted, my model isn't finished yet, so take this all with a grain of salt. I'll report back after a string-stability and actual test flights with the various motors and we'll see how she flies. And one other thing: I may be evil by trying to revise history, but I think this model would look nice painted dark blue instead - I have too many black rockets already!

Please note this correction in the above comment. Quest included a slip of paper specifying to only fly this model on an A8-3 motor - NOT the B-impulse motor I stated above. I'll be string testing and flying this "stretched" X-15 this weekend. Stay tuned...

My "stretched" X-15 flew great! (The body tube supplied from Quest was about 3" longer than the models pictured here). Passed string tests without needing any noseweight, and I flew it with a B6-2 in moderately strong winds that should have upset an unstable model.