Brief:
I was working on repairs and keeping an eye open towards specific commitments but found myself again with a day off with not enough to do. I decided to try and build the Lepton from Red River Rocketry. It is a two stage job that should not be too hard and which I am very much looking forward to feeding when the A8-0s come out again. 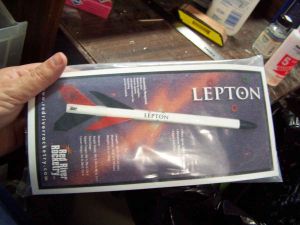 When the glue on the motor mounts had set up, it was time to install the mounts in the body tubes. The sustainer mount was slipped into the long body tube and glued in place flush with the aft end. The booster mount was glued into the booster airframe with the thrust ring flush with the aft end. Instead of being intended to keep the motor from scooting too far forward, it is meant to be used to ensure separation.

The booster is coupled to the sustainer with a cardboard coupler. It was marked at the halfway point and glued into the booster airframe tube.

The payload bay is coupled to the rest of the sustainer with a 2" balsa coupler. It was glued into the base of the payload bay and the eye screw was installed and secured with some glue. The base of the nose cone was then sanded a bit so that it would better fit the bay.

The fins for this kit come with instructions that the leading edge be rounded and the trailing edges be tapered. Instead of doing that, I just rounded all the edges except the root edge. I do that for appearance sake, not performance. With my flying conditions, I actually prefer that my rockets not go too high.

The kit contains a wraparound fin guide. I used it to mark the booster and sustainer airframe tubes and then placed the sustainer fins using a double glue joint. The booster fins were applied in the same manner as those for the sustainer but alignment was checked with the sustainer fins. When all were in place, each fin was filleted.

The launch lug was glued to the sustainer on the alignment line with its leading edge just forward of the forward edge of the fins.

I could kick myself for not thinking earlier about the shock cord mount. I wanted to put a Kevlar® loop around the motor mount but I forgot all about it until after the mount was installed. I had to make due with a tri-fold mount. Its pattern was printed on stiff card stock and I put in Kevlar® instead of the sewing elastic. I planned on adding the elastic just before the NC to give a longer recovery train.

Finishing:
The balsa NC and the fins were all covered with Elmer's sealer and the rocket was put away for the day to let it dry.

The filler was sanded down but I was worried about time to finish until my club launch so I omitted any priming. I went straight to Krylon gloss white and gave the rocket 3 light coats. I did not make any effort to get the NC or the fins because those were going to get another color anyway.

I let the white dry overnight and by that time I certainly did not have a chance to mask, spray, re-mask, and repaint before my club launch. I decided to brush on the color with Testor's acrylic. I painted the NC, one fin of the sustainer and two fins of the booster black.

Since the acrylic dries quickly, I could start almost immediately with the red. I again used acrylic and painted the remaining fins. The brushed finish looks better in the photos than it does in real life, but it will look fine from the pad.

The decal work for this kit was pretty straightforward. It came with a sticker of gold foil which I applied just behind the NC. It also came with a large name decal that went on the sustainer, a pair of Red River Rocketry logos (one of which was placed on the booster), and two stylized atoms with electron orbitals which went on either side of the red booster fin. 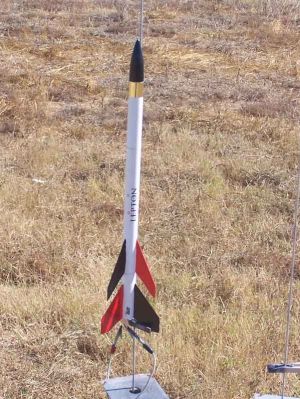 Flight:
I only had time to launch this rocket once, but I can guarantee it will fly more. I loaded it with a C6-0/A8-5 combination joining the 2 motors with cellophane tape. The igniter was a bit difficult to get in place through the aft thrust ring because of my big fingers, but I got it in there. The flight was perfect and straight. It staged perfectly and the sustainer ignited taking the rocket even higher. It deployed at apogee and came safely home. This was the most perfect staged flight of any rocket I have ever built!

Recovery:
I don't like tri-fold mounts, but this one performed fine as did the streamer.

The booster was the "amazing" part of the flight. I expected a normal tumble, but that is not what I got.

I had actually entered this rocket in my club's strange "Booster Duration" competition. The rocket has to stage successfully and the sustainer has to be recovered. It is the booster which is timed though. I entered this rocket just for the sake of entering. I certainly did not expect anything more than an "also ran".

My eyes were on the sustainer the whole time so I didn't get to see the booster after it popped off. Long after I thought it should have hit the ground and while I was still trying to track the sustainer, I heard the times making comments about still having the booster in site. They say it glided as much as tumbled and did so well enough to come in second place.

Summary:
This rocket is a good introduction to staging. The parts of of high quality and they go together easily. Best of all, they work together well with a nice little staged rocket.

This rocket grew on me during the construction process and is first rate.