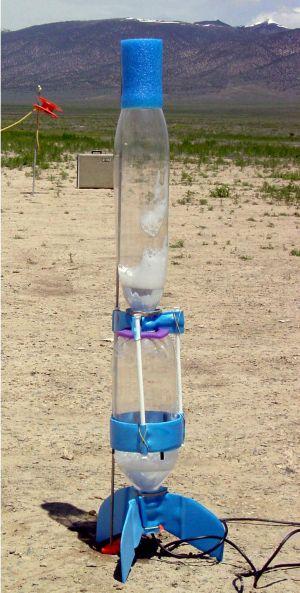 Construction:
The kit comes complete with 2 water bottles, 2 fin assemblies, 2 pressure nozzles, launch rod, and launch equipment. The buyer must assemble the kit and provide a source of pressurized air with the bicycle pump. The kit that I received was complete, well packed, and had a few extra rubber bands in case some of them broke.

The detailed instruction sheet has both text and color diagrams and drawings to demonstrate the step-by-step construction of the rocket. The kit includes 4 sizes of rubber bands and it was clear from the instructions which size was needed at each step. The pieces are simple to assemble. I would recommend to anyone buying the kit to assemble the kit at home one time, then take it apart and reassemble it before launch. Once you get the hang of it, it can be disassembled and then reassembled at the launch site in a matter of minutes.

The rubber bands hold the pieces together with just enough force to survive takeoff and flight, but the rocket is meant to collapse on landing to protect the parts from breaking. Since the rocket essentially self-destructs and includes a padded bumper on the front, it is unlikely that someone could be seriously injured by one of these rockets even if it struck them full force during lift off.

The Extreme 2-Stage has a booster section that is essentially the same as the Anti-Gravity Research water rocket kit called The Skylab. The booster has a set of 3 traditional delta fins and the booster bottle is a full 2 liter sized bottle. The sustainer section is essentially the same as the single stage Extreme Screamer kit. The sustainer uses a ring fin which slides down over the booster. The sustainer bottle is smaller and narrower. It appears that this is a bottle that has been reshaped by melting and elongating it. It has a large rubber bumper permanently attached to the front. By purchasing the Extreme 2-Stage and the High Altitude Pro kits, we figured that we had all of the appropriate fins, nozzles, and bottles to build any of the 6 available water rockets. 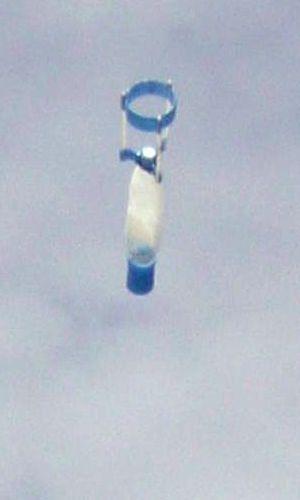 Flight:
The instructions suggest using a small amount of water (120 ml I think) in each stage and there is a picture in the instructions showing approximately how full to make the bottle. I also read somewhere (I believe on the antigravityresearch.com website) that a small amount of dish soap in the bottle will cause foaming, slowing the expulsion of the water from the nozzle and thus helping to sustain flight for a longer period of time and achieve a higher altitude.

We loaded up the bottles with water according to instructions and added a drop of liquid dish soap to each. The kit comes with a wood dowel for use as a launch rod. The launch rod provided with the kit is meant to be pushed into the dirt so the rocket slides down on the rod with one of the fin supports acting as a launch lug. As with our launch of the High Altitude Pro, I used a metal launch rod from our model rocket launcher instead. I reasoned that this longer rod would keep the rocket going more straight in the intended direction. The rocket slid more smoothly along the metal rod than it did on the wooden dowel that came with the kit as well.

I pumped the bottle with a standard bicycle pump with a gauge that registers up to 160psi. The flow of air into the bottles is restricted by the balloon on the end of the launch tube which allows the air to slowly enter the bottle no matter how much pressure the pump exerts. It is thus not necessary to frantically pump. The air could also be seen to bubble slowly into the sustainer bottle. A good steady pumping action seemed to be sufficient and the bottles never released prematurely from the tube. The pressure gauge periodically read up to 100 psi but then fell to about 70 psi as the air passed through the balloon into the bottle. I never could determine precisely the pressure in the bottle.

Eventually I decided to stop pumping for the first launch. The launch tube soon slipped out of the nozzle and the rocket slowly lifted up the launch rod, spewing sudsy water. The booster failed to clear the launch rod and slid back down settling back on the ground. The sustainer then shot off straight up and had a very nice flight to perhaps 75 feet. It then landed near the launch rod and the ring fin collapsed sufficiently to prevent any damage to the components. The booster was clearly underpowered and I decided that for the next launch I would try to pump much harder for a longer period of time.

For the second launch, I pumped until it was clear that pressure was leaking out around the end of the launch tube. At release, the rocket lifted slowly to about 20 feet where the booster began to lose power and the rocket slowly tipped sideways before staging occurred. Staging finally occurred with the rocket pointing about 20 degrees above vertical. The sustainer squirted off with a tremendous blast of water and suds and flew in a fast arc 30-40 feet off the ground for about 200 feet before nose diving into the ground.

Summary:
The Extreme 2-Stage is a simple, sturdy water rocket that should be safe for kids of all ages. It uses a chubby booster stage with 3 fins and a slender sustainer bottle with a ring fin. The fin assemblies partially collapse upon landing, protecting the components but requires reassembly between launches. The pre-molded Styrofoam fins and the launch system are ingenious and merit the purchase of this kit. The staging mechanism works surprisingly well. We achieved only relatively poor performance in our initial efforts with this rocket, leading me to believe that the booster is underpowered. I am not sure how to remedy this except to increase pressure in the bottles, particularly the booster. I think that this has the potential to be a very fun rocket.